To Tackle Inequality, We Need to Talk About Where Wealth Comes From

Recent studies found many British believe people are rich because they earned it, a myth widely held on both sides of the Atlantic. Therefore, the Left must develop a distinct, compelling narrative about how wealth is really created and distributed. 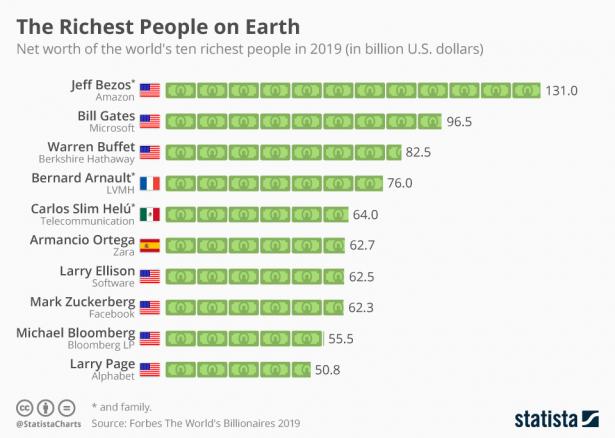 Amazon founder Jeff Bezos now heads the list of the top 10 richest people, with a net worth of $131 billion. If the 54-year old started spending a dollar each second, his riches would last him over 4,150 years., Statista.com

Do people in Britain resent the rich? According to two new studies published this week, the answer to this question is: not really.

The studies, one commissioned by Trust for London and another by Tax Justice UK, explore public attitudes towards wealth based on focus groups held across England. Both found that most people are relatively content with people getting rich, and that attacks on the wealthy are often viewed negatively.

This presents a dilemma for progressives. In recent years left-wing leaders on both sides of the Atlantic have taken a more confrontational approach towards the super-rich. In Britain, the Labor Party’s war cry under the leadership of Jeremy Corbyn has been ‘For the many, not the few’, while in the US Bernie Sanders has made no secret of his contempt for billionaires.

But what if it turns out that ordinary people don’t agree? One response to this dilemma, as outlined by Sonia Sodha in the Observer, is to accept that “the belief that Britain is a meritocracy is ingrained in our collective psyche”, and adjust policies and narratives accordingly. This would mean ditching the class-war rhetoric and instead putting forward solutions designed to appeal to a meritocratic worldview. This might include, for example, closing tax loopholes and increasing particular taxes on grounds of fairness and efficiency.

Sodha is right to point out that this strategy is more likely to chime with people’s existing attitudes towards wealth. As the authors of the Tax Justice UK report note: “The participants in our focus groups largely believe in meritocracy. Those with wealth were seen as having acquired it through hard work.” Participants in the Trust for London research expressed similar views.

But does this mean that progressives should accept the way things are and move on? Not necessarily. As a well-known philosopher once said: “The philosophers have only interpreted the world in various ways; the point, however, is to change it.”

People’s views aren’t formed in a vacuum: they are shaped by social and political forces that evolve over time. Margaret Thatcher’s neoliberal revolution wasn't just successful because it reorganized the economy – it was successful because it embedded a particular narrative about how wealth is created and distributed in society. This is a world where, so long as there is sufficient competition and free markets, every individual will receive their just rewards in relation to their true contribution to society. There is, in Milton Friedman’s famous terms, “no such thing as a free lunch”. It’s a world where businesses are the “wealth creators” who create jobs and drive innovation, and business owners are entitled to the financial rewards of success – regardless of how enormous they are.

Tony Blair’s ‘Third Way’ largely accepted this narrative of wealth creation, and until relatively recently nobody in the mainstream of British politics challenged it. Is it really any wonder that most people believe it?

The problem, of course, is that it bears little resemblance to how the economy actually works. While it is true that working hard will generally help you earn more money, this causality doesn’t hold in reverse: not all wealth has been attained through hard work. In practice, the distribution of wealth has little to do with contribution, and everything to do with politics and power.

Someone that is born in the UK will earn more than someone born in Sub-Saharan Africa, even if they perform exactly the same labor. Why? Because one was lucky enough to be born in a powerful country with a legacy of imperialism that has rigged the rules of the global economy in its favor. The economist Branko Milanovic has estimated that 60% of someone’s income is determined by where they were born, and an additional 20% is determined by the income level of their parents. This means that place of birth and parental background accounts for around 80% of someone’s earning power on average.

In the age of the ‘self-made’ millionaire, the lottery of birth is more important than ever. As George Monbiot once said: “If wealth was the inevitable result of hard work and enterprise, every woman in Africa would be a millionaire.”

Within countries, extreme fortunes almost always derive from control over a scare resource – fossil fuels, minerals, land, monopoly networks, money etc. To the early classical economists, this kind of wealth – attained by simply being a gatekeeper to scarce resources – was deemed to be unearned, and referred to it as ‘economic rent’. But today the Sunday Times Rich List is dominated by rentiers – financiers, real estate tycoons, oil barons, monopolists and aristocrats – many of whom acquired their original fortune in somewhat questionable circumstances.

But it’s not just billionaires that accumulate wealth without working. Over a third of all the income in Britain is paid out as capital income (dividends, rents and interest) rather than labor income (wages and salaries). Capital income is inherently passive: it doesn’t correspond to work or skill, but ownership. And while capital ownership is distributed extremely unequally, in recent decades changes to pensions and the housing market have enabled many middle class households to join the capital income gravy train and accumulate wealth without lifting a finger.

As I’ve written about before, since 1995 three quarters of all wealth accumulated in the UK – totalling £5 trillion – has come from rising house prices. The driving force behind rising house prices has been rising land prices. But land is not a source of wealth but of economic rent. The truth is that most wealth made through the housing market has been gained at the expense of others who are now seeing more of their incomes eaten up by higher rents and larger mortgage payments. The housing boom is not an example of wealth creation, but wealth redistribution on an unprecedented scale.

And then there is inheritance: around £100 billion of wealth is passed on to new owners every year without any corresponding productive activity, much of it escaping any tax.

Overall, the proportion of wealth in Britain that can truly be ascribed to “hard work”, however loosely defined, is infinitesimally small. The idea that Britain is a meritocracy, however appealing, is objectively false – and we shouldn’t be afraid to say so. But it's hardly surprising that many people believe Britain is a meritocracy when the Thatcherite narrative has gone unchallenged for decades.

If the left is to achieve its historic aim of achieving distributive justice, it can’t do so by parroting a narrative on wealth that was designed to promote the cause of Thatcherism. Instead, we must develop a distinct and compelling narrative about how wealth is really created and distributed in society.

This means recognizing that wealth creation is a collective process involving many different interdependent stakeholders – workers, the government, the natural environment, civil society, and, yes, entrepreneurs. It means highlighting how the mechanism linking contribution and reward for each of these stakeholders is fundamentally broken: workers are being paid less than the value they create, owners are appropriating wealth they didn't create, vast profits are being made by destroying our ecosystems, and the role of the state in wealth creation is undervalued. And it means proposing new mechanisms for distributing financial rewards that more accurately reflect the collective nature of wealth creation, and rebalance power between capital and labor.

“If some of us grow rich in our sleep, where do we think this wealth is coming from? It doesn’t materialize out of thin air. It doesn’t come without costing someone, another human being. It comes from the fruits of others’ labors, which they don’t receive.”

This isn’t just about winning a technical argument – it’s also about winning at the ballot box. Both pieces of research published this week found that although most people view wealth accumulation in a positive light, they hold a much more negative view of wealth that has not been earned through hard work or skill. As the Trust for London report notes:

“Those who were thought to have achieved their status and financial position through hard work were deemed to be deserving of it… By comparison, those deemed not to have had to work hard were viewed less favorably.”

Where people's wealth comes from matters. If people can be persuaded that Britain isn’t quite as meritocratic as it’s made out to be, public attitudes towards wealth can be shifted in a more progressive direction. Indeed, the authors of the Trust for London report conclude that “if policy makers wish to address inequality, they may do better to think in terms of narratives of how riches are acquired”.

These narratives won’t change overnight. But they won’t change at all unless progressives fight to change them – just as Margaret Thatcher did in the 1980s.

This doesn’t mean criticizing people’s natural desire to earn more money, or attacking successful business owners who treat their employees and the environment well. But it does mean drawing attention to the fossil fuel executives who are enriching themselves by destroying the planet; the bankers who cashed-in on the crisis they caused; the aristocrats who live off their ancestors’ ill-gotten gains; and the exploitative bosses who underpay their staff.

In politics you can either shape the world, or be shaped by it. On this issue, there's no middle ground.

[Laurie Macfarlane is Economics Editor at openDemocracy and Head of Finance at the University College London Institute for Innovation and Public Purpose.]