The excessive testing, Corl said, stemmed from a model of emergency care that forces doctors to practice “fast and loose medicine.” Patients get a battery of tests before a doctor even has time to hear their story or give them a proper exam. 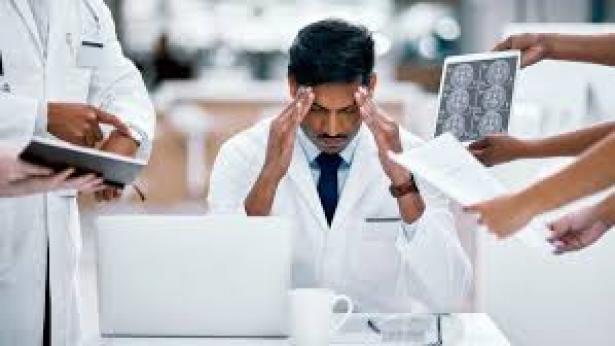 Physician Keith Corl was working in a Las Vegas emergency room when a patient arrived with chest pain. The patient, wearing his street clothes, had a two-minute exam in the triage area with a doctor, who ordered an X-ray and several other tests. But later, in the treatment area, when Corl met the man and lifted his shirt, it was clear the patient had shingles. Corl didn’t need any tests to diagnose the viral infection that causes a rash and searing pain.

All those tests? They turned out to be unnecessary, but left the patient with over $1,000 in extra charges. The excessive testing, Corl said, stemmed from a model of emergency care that forces doctors to practice “fast and loose medicine.” Patients get a battery of tests before a doctor even has time to hear their story or give them a proper exam.

The shingles case is one of hundreds of examples that have led to his burnout with emergency medicine. What’s driving that fatigue and exasperation, he argued, is something deeper — a sense of what he called “moral injury.”

Corl, 42 and now an assistant professor of medicine at Brown University, is among a growing number of physicians, nurses, social workers and other clinicians who are using the phrase “moral injury” to describe their inner struggles at work.

The term comes from war: It was first used to explain why military veterans were not responding to standard treatment for post-traumatic stress disorder. Moral injury, as defined by researchers from veterans hospitals, refers to the emotional, physical and spiritual harm people feel after “perpetrating, failing to prevent, or bearing witness to acts that transgress deeply held moral beliefs and expectations.”

Psychiatrist Wendy Dean and surgeon Simon Talbot were the first to apply the term to health care. Both wrestled with symptoms of burnout themselves. They concluded that “moral injury” better described the root cause of their anguish: They knew how best to care for their patients but were blocked from doing so by systemic barriers related to the business side of health care.

That idea resonates with clinicians across the country. Since they penned an op-ed in the online health news site Stat in 2018, Dean and Talbot have been flooded with emails, comments, calls and invitations to speak on the topic.

Burnout has long been identified as a major problem facing medicine: 4 in 10 physicians report feelings of burnout, according to a 2019 Medscape report. And the physician suicide rate is more than double that of the general population.

The health-care system is causing rampant burnout among doctors, nurses.

Dean said she and Talbot have given two dozen talks on moral injury. “The response from each place has been consistent and surprising: ‘This is the language we’ve been looking for for the last 20 years.’ ”

Dean said that response has come from clinicians across disciplines, who wrestle with what they consider barriers to quality care: insurance preauthorization, trouble making patient referrals, endless clicking on electronic health records.

Those barriers can be particularly intense in emergency medicine.

Corl said he has been especially frustrated by a model of emergency medicine called “provider-in-triage.” It aims to improve efficiency but, he said, prioritizes speed at the cost of quality care.

In this system, a patient who shows up to an ER is seen by a doctor in a triage area for a rapid exam lasting less than two minutes. In theory, a doctor in triage can more quickly identify patients’ ailments and get a head start on solving them. The patient is usually wearing street clothes and sitting in a chair.

These brief encounters may be good for business. They reduce the “door to doc” time — how long it takes to see a doctor — that hospitals sometimes boast about on billboards and websites. They enable hospitals to charge a facility fee much earlier, the minute a patient sees a doctor. And they reduce the number of people who leave the ER, frustrated or angry, without “being seen,” which is another quality measure.

But “the real priority is speed and money and not our patients’ care,” Corl said. “That makes it tough for doctors who know they could be doing better for their patients.”

Dean said people often frame burnout as a personal failing. Doctors get the message: “If you did more yoga, if you ate more salmon salad, if you went for a longer run, it would help.” But, she argued, burnout is a symptom of deeper systemic problems beyond clinicians’ control.

Emergency physician Angela Jarman sees similar challenges in California, including ER overcrowding and bureaucratic hurdles to discharging patients. As a result, she said, she must treat patients in the hallways, with noise, bright lights and a lack of privacy — a recipe for ­hospital-acquired delirium.

The perils of delirium

For example, when an older patient breaks an arm and cannot be released to their own care at home, they may stay in the ER for days to await evaluation from a physical therapist and approval to transfer to rehab or a nursing home, she said. Meanwhile, the patient gets bumped into a bed in the hallway to make room for new patients who keep streaming in the door.

Also at UC-Davis, Nick Sawyer, an assistant professor of emergency medicine, has been working with medical students to analyze systemic problems. Among those they have identified: patients stuck in the ER for up to 1,000 hours while awaiting transfer to a psychiatric facility; patients who are not initially suicidal, but become suicidal while awaiting mental health care; patients who rely on the ER for primary care.

Also at UC-Davis, Nick Sawyer, an assistant professor of emergency medicine, has been working with medical students to analyze systemic problems. Among those they have identified: patients stuck in the ER for up to 1,000 hours while awaiting transfer to a psychiatric facility; patients who are not initially suicidal, but become suicidal while awaiting mental health care; patients who rely on the ER for primary care.

Sawyer, 38, said he has suffered moral injury from treating patients like this one: A woman had a large kidney stone and a “huge amount of pain” but could not get approval for surgery because the stone was not infected and therefore her case wasn’t deemed an “emergency” by her insurance plan.

“The health system is not set up to help patients. It’s set up to make money,” he said.

The best way to approach this problem, he said, is to help future generations of doctors understand “how decisions made at the systems level impact how we care about patients” — so they can “stand up for what’s right.”

How to measure doctor experiences among physicians is far from clear.

Cynda Rushton, a nurse and professor of clinical ethics at Johns Hopkins University, who has studied the related notion of “moral distress” for 25 years, said there isn’t a base of research for moral injury among clinicians as there is for moral distress, which happens when someone feels responsible for addressing a moral problem but is not able to follow through as they feel they should.

But “what both of these terms signify is a sense of suffering that clinicians are experiencing in their roles now, in ways that they haven’t in the past,” Rushton said.

Dean grew interested in moral injury from personal experience. After a decade of treating patients as a psychiatrist, she stopped because of financial pressures. She said she wanted to treat her patients in longer visits, offering both psychotherapy and medication management, but that became more difficult. Insurers would rather pay her for only a 15-minute session to manage medications and let a lower-paid therapist handle the therapy.

Dean and Talbot created in 2018 a nonprofit advocacy group called Moral Injury of Healthcare, which promotes public awareness and aims to bring clinicians together to discuss the topic.

Their work is attracting praise from a range of clinicians.

In Cumberland County, Pa., Mary Franco, who is now 65, retired early from her job as a nurse practitioner after a large corporation bought out the small private practice she worked in. She said she saw “a dramatic shift” in the culture there after the change, where “revenue became all-important.” The company cut in half the time for each patient’s annual exam, she said, down to 20 minutes. She spent much of that time clicking through electronic health records, she said, instead of looking the patient in the face. “I felt I short-shrifted them,” she said.

In southern Maine, social worker Jamie Leavitt said moral injury led her to take a mental health break from work last year. She said she loves social work, but “I couldn’t offer the care I wanted to because of time restrictions.” One of her tasks was to connect patients with mental health services, but because of insurance restrictions and a lack of quality care providers, she said, “often my job was impossible to do.”

In Chambersburg, Pa., physician Tate Kauffman left primary care for urgent care because he found himself spending half of each visit doing administrative tasks unrelated to a patient’s ailment — and spending nights and weekends slogging through paperwork required by insurers.

“There was a grieving process, leaving primary care,” he said. “It’s not that I don’t like the job. I don’t like what the job has become today.”

Corl said he was so fed up with the provider-in-triage model of emergency medicine that he moved his ER clinical work to smaller, community hospitals that don’t use that method.

He said many people frame burnout as a character weakness, sending doctors messages like, “Gee, Keith, you’ve just got to try harder and soldier on.” But Corl said the term “moral injury” correctly identifies that the problem lies with the system.

Kaiser Health News is a nonprofit news service covering health issues. It is an editorially independent program of the Kaiser Family Foundation, which is not affiliated with Kaiser Permanente.