"In Mexico it's like we're in a state of war; we're in a humanitarian crisis because of the quantity of women that have disappeared or been killed." 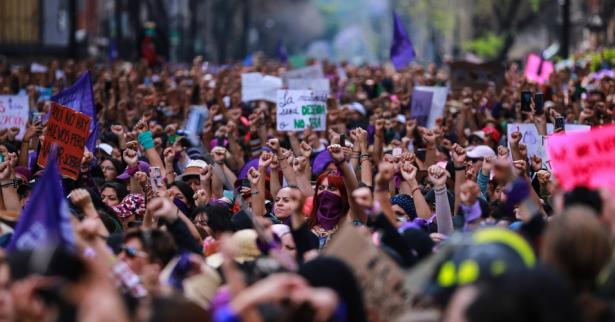 Women raise their fists a protest on the International Women's Day in Mexico City on March 8, 2020., Manuel Velasquez/Anadolu Agency via Getty Images

Millions of women across Mexico took part in Monday's "Un Día Sin Nosotras" or "A Day Without Us" strike, staying home from work and school to protest the country's high rates of femicide and other forms of gender-based violence just a day after an estimated 80,000 people marched in Mexico City to mark International Women's Day.

"In Mexico it's like we're in a state of war; we're in a humanitarian crisis because of the quantity of women that have disappeared or been killed," National Citizen's Observatory of Femicide coordinator María de la Luz Estrada told the Associated Press.

The AP reported that "government data say 3,825 women met violent deaths last year, 7% more than in 2018. That works out to about 10 women slain each day in Mexico. Thousands more have gone missing without a trace in recent years. Authorities seem incapable of preventing or properly investigating the crimes, very few of which result in convictions."

Sandra Reyes, a 33-year-old biologist at the National Cancer Institute, told the Guardian that Monday's strike sent a clear message to Mexican society. "In some ways, it's a taunt: if you do not want us out here in the streets, we'll disappear," she said.

The Mexican business group Concanaco Servytur estimated that the strike could have cost the country's economy up to $1.37 billion.

Despite the cost, some businesses gave women paid leave for the day in solidarity while others shut down entirely. According to the AP:

[The strike] is about "showing, socially... how valuable we women are, our contribution, and what would happen if one day we were not around. In all aspects: as homemakers, as workers, as consumers," said Lluvia Flores Gómez, 40, who was sipping coffee and reading a book on the couch at home in the historic downtown instead of going to work.

Flores shuttered her bakery in observation of the strike, though she said her employees—all women—would be paid for the day. She said the business would take an economic hit, but it was important to call attention to all the ways women are under attack in Mexico—not only murder, disappearance, and rape, but also home and workplace discrimination and lack of equal opportunity.

"The point is for there to really be a loss, that is, for this day to happen without us. ...It had to be something like this, radical and cutting, so that the loss for everyone would be seen," she said, "or rather the absence, the lack of our presence."

Participants and supporters of the nationwide 24-hour work stoppage, also dubbed "A Day Without Women," posted updates on social media with the hashtags #UnDiaSinMujeres, #UnDiaSinNosotras, and #UnDiaSinEllas. They shared photos of closed shops and restaurants as well as empty desks and subway cars.

"Our government urgently needs to take action. We hope the strike opens their eyes," Marisela Villapando, who drives Uber part-time, told VICE. Villapando, who said she knows four women who were murdered or disappeared in the past year, added that "we live in fear."

Elsa Arista González, a 40-year-old a law student and coffee shop employee, echoed that sentiment in comments to the Guardian.

"We used to be able to walk home from school alone, and leave open the door to your house. Not anymore," said González. "We've become used to living in fear."

Mexican President Andrés Manuel López Obrador on Monday delivered conflicting messages about the strike—both claiming that the government is working every day to address gender-based violence and also suggesting that some of the anger directed at his administration over the issue "is conservatism disguised as feminism."

"This movement has various aspects," AMLO, as the president is known, said during a morning news conference. "It's a movement of women who legitimately fight for their rights and against violence, against femicides. But there is another part that is against us, and what they want is for the government to fail."

"The president has been provoking us with his indifference, with his comments," Loaeza said. "He does not grasp that this is about feminism. He misrepresents it, distorts it by saying that it is conservatism."