books The 99 Percent Economy: How Democratic Socialism Can Overcome the Crises of Capitalism

Despite some weaknesses, this books offers a useful addition to the widespread and ongoing conversations about what democratic socialism means today. 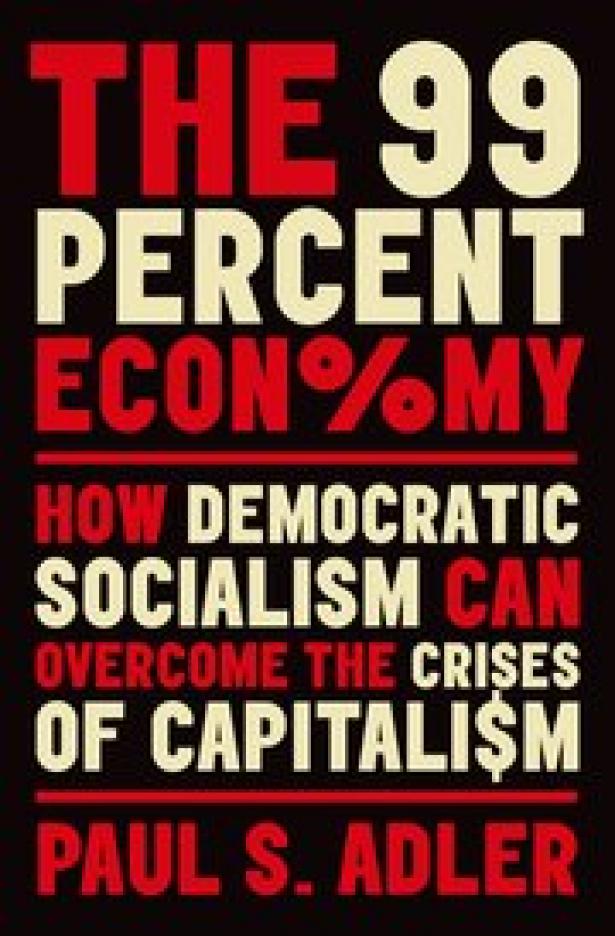 In seven exquisitely written chapters plus an introduction, US business school academic Paul Adler explains three things: (a) why our current economy works well for about 1% of the world population; (b) whilst it barely works for the rest of us 99%; and (c) what we can do to change this. Perhaps ever since David Ricardo and Karl Marx began writing about capitalism, it has always seemed to be in one state of crisis or another. Adler lists the six main crises as (1.) economic irrationality, (2.) workplace disempowerment, (3.) unresponsive government, (4.) social disintegration and (5.) international conflict. Unforeseen by the giants of economic theory during the 19th century, a new kind of crisis has recently been added. The sixth is the crisis of environmental unsustainability, the real prospect of an uninhabitable earth (Wallace-Wells 2017). All of this links to Jameson’s dictum that it is easier to imagine an end to the world than an end to capitalism.

Adler’s book starts with ‘the argument’ in which he highlights that ‘the Walton family [Walmart] alone … has more wealth than 40% of American families combined’ (1). This destroys the ‘rags to riches’ ideology which most Americans have been made to believe in. Adler argues that ‘there is something profoundly offensive about the fact that eight people, six of them in the USA, now own as much in assets as the entire bottom 50% of the world’s population’ (10). It is bad enough when huge numbers of people are either unemployed or grossly underpaid for their labour. But when people go to work and think they are earning a fair or living wage, statistics belie their beliefs. Today, ‘only 45% of employees feel their employers listen to their ideas or concerns’ and only ‘31% feel their employers show concern for employees not just for the financial bottom line’ (13).

In regard to the environment, things do not look much better. ‘By 1970, humanity had already exceeded the carrying capacity of the planet … we are killing off other species at an extraordinary rate … climate change already cost 400,000 lives a year, globally’ (15). Meanwhile, in America ‘money and work [remain] the biggest sources of stress’ (17), resulting, for example, in the fact that ‘men in Harlem live less long than men in Bangladesh’ (18). Meanwhile, US life expectancy is still on the decline. Much of this comes despite – or perhaps because of – the fact that we now have greater corporate social responsibility and business ethics. Yet individual responsibility and social morality have all but disappeared.

At the international level, things do not look much brighter. Our globalized world is moving further and further away from German philosopher Immanuel Kant’s dream of eternal perpetual peace based on a world government. Instead, the USA, for example, has ‘helped to overthrow at least thirty-six governments, interfered in at least eighty-four foreign elections, attempted to assassinate over fifty foreign leaders [with the Iranian general and chief terrorist Qasem Soleimani being the latest] and dropped bombs on people in over thirty countries [while also] provid[ing] aid to three-quarters of the world dictatorships’ (20). Other countries, western democracies, Russia, third world kleptocracies, oligarchies and a variety of failed states do as much or worse according to their proportionate size, wealth and influence. Nobody occupies the moral high ground any longer and the sea levels are rising quickly.

Given all this, Adler argues that ‘[c]rises are a feature of capitalism, not a bug’ (27). The same goes for unemployment. The ‘threat of unemployment always lurks. Unemployment is not an unfortunate accidental outcome, but a permanent feature of capitalism’ (32). There simply is no unemployment without capitalism. The structural asymmetry between labour and capital manifests itself at work as well because ‘the great majority of us negotiates our pay and working conditions at a structural disadvantage, because we need the job more than the employer need any one of us’ (31).

For many employers, labour is not much more than another production cost. Unlike labourers, companies can off-load such costs onto someone else. This is called externality. The environment, for example, is an externality. ‘Capitalism is a system that consumes forests, fish, minerals, soil fertility, and fresh water faster than they can be replenished [Thus] capitalism [as an extreme form of industrialization] encourages environmental plunder … this plunder boosts the bottom line’ (39). Not only that, capitalism also destroys the environment by dumping unwanted waste into the environment.

All this, so Adler argues, leads to a ‘growing tension’ (49). To alleviate this tension or what Harvey has named the seventeen contradictions of capitalism (2014), four avenues of approach are usually proposed. The first is what Adler calls ‘ethical capitalism’ (60) – a version of please, be nice capitalism. This anodyne version is often found in the more enlightenment corners of business schools and economics faculties. In business schools, it is sold as ‘win-win opportunities [that] help … competitiveness’ (61). The next l’idée fixe is that one can make capitalism good by regulating it. It comes under the hallucination that good laws make good capitalism. The third idea is that social democracy will solve problems. British sociologist Giddens made it famous in Third Way (1998). In the subsequent Blair years, poverty rose as corporations thrived and wealth hoovered upwards rather than trickle down. The last delusion is that of technology. Modern technology – the internet of things, battery-driven cars, etc. – will solve our problems. None of these seem to have worked so far.

Since the comprehensive failure of all four models, Adler proposes that our economy needs to be democratically managed. He suggests four ways: (i) collaborative strategizing, i.e., democratic planning through ‘identifying our common goals’ (79); (ii) collaborative innovations. This means that R&D is geared towards human – rather than corporate – needs; (iii) collaborative learning that shifts the current ‘factory’ model of education substantially; (iv) inside companies, our current control and command model needs to move towards ‘collaborative working’ (99). As an expert on workplace relations, Adler suggests four innovative ways (101) in which the latter can be achieved: (a) the articulation of collective goals; (b) on-going, reasoned discussions about how these collective goals relate to everyday work decisions; (c) evaluations and pay systems that reinforce the combination of individualism and collectivism; and (d) the development of distinctive skills.

All this leads Adler to suggest even further that ‘we must replace private enterprise with publicly owned enterprise’ (113). So far so good. While many have suggested this before, Adler also has a chapter on ‘getting there’ (145) in which he develops four scenarios. To build the momentum for the establishment of public rather than state ownership, nor nationalisation, Adler conceives of four spheres: (1) the political sphere, (2) the workplace sphere, (3) schools and universities and (4) our communities (150). Despite the rise of populism around the world from India to Brazil, with great headline stars such as Boris Johnson and Donald Trump, Adler concludes ‘progressives have reason to be optimistic about the prospects for democratic socialism in the twenty-first century [moving towards] the creation of an economy for the 99% – it is urgently needed’ (156).

Paul Adler’s fine, well-argued, exquisite and insightful book is full of astute evaluations and analysis. It makes many sensible suggestions, if – and only if – all this makes much sense in the real world, where forces, people and ideas do not come in neatly set out lists, paradigms and bullet points. The problem remains, why can’t we find ourselves in the place so powerfully described by Adler? It is very well conceivable that Adler is making a mistake many others before him have made. It is possible that there might be a scotoma or ‘blindspot’ (Smythe 1977). In his seminal article entitled ‘Communications: Blindspot of Western Marxism’, Smythe alludes to the role of communication, or better the media, in capitalism. The media remains a powerful institution in capitalism and in democratic societies. We know capitalism, neoliberalism, politics, Donald Trump largely through the media. As such, the media is an important gatekeeper in society linking the individual to society. Smythe’s core argument is that one needs to take the role of the media into consideration when discussing capitalism and society. It is a question that comes whether such an analysis is conducted from the standpoint of ‘Western Marxism’, as in Smythe, or from the standpoint Adler has taken.

Essentially, the argument missing in Adler’s otherwise brilliant book is a tendency to undervalue the role of the media in capitalism. In capitalism, capital not only owns factories that make things like shoes and cars but also includes companies that make news, entertainment, etc., and here it can be said that the media has two functions. It’s role is not just to sell us consumer goods but also creates what Theodor W. Adorno and Max Horkheimer have called mass deception. This function legitimises capitalism largely through camouflaging the aforementioned contradictions of capitalism. This is the case whether it is liberal capitalism, social-democratic capitalism or neoliberal capitalism. Today, we seem to experience a world in which its prime ideology – neoliberalism and more recent hallucinations – are transitioning towards the ‘Age of Populism’ (Ricci 2020). Sadly, our world does not appear to move towards Adler’s ‘prospects for democratic socialism’, but towards right-wing populism (Klikauer 2020).

Norman Simms was born in Brooklyn, NY in 1940, educated at Alfred University and then Washington University in Saint Louis. He has lived and worked in Canada, Israel, France and New Zealand. He is now a retired scholar.