Whoever Wins this Election, All of Guyana Loses

Ten days after the Guyanese election, returns have still not been released; and today the head of Guyana's Supreme Court has ordered a partial recount of votes. Two veteran Guyanese politicians call for the creation of a government of national unity. 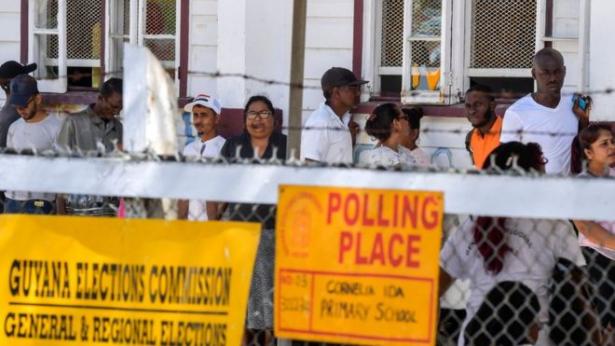 Tensions have been high in the country since the disputed election on March 2nd., Credit: AFP // BBC

A Call for a Government of National Unity

We write as two Guyanese who have come out of the leadership of both major parties, who have lived through the violence of the 1960 and who have been following with deep sadness and alarm the news of the outbreak of conflict following a mainly peaceful electoral campaign and voting process in our beloved country. People’s lives have been disrupted in the past week, and a sense of fear and mistrust is rapidly taking over our communities. History teaches us that mistrust can lead to violence, if it is not nipped in the bud.

As we have already witnessed, it is the most vulnerable among us who will suffer the most. Irresponsible leadership very rarely gets affected by the disputes they consciously sow. A very dangerous situation is fast approaching. We add our voice to statements of concern already made, and ask political leaders to come together and issue a joint statement to all of their supporters and all Guyanese, calling for peace and for an end to violence or the threat of violence and intimidation. Further, we call on the two major political leaders and parties to put the interest of Guyana on the table, to surrender their narrow goals, and to use the division of spoils as the basis of an immediate agreement of a joint government, based on the verified results of the 2020 elections.

We underline the need for everyone involved in the elections machinery to fully abide by the spirit and direction of the Representation of The People’s Act. It is fortunate that the international observers are present. This makes it possible for them to evaluate any claims of evidence of illegality in the elections process and to bring these to light. Illegalities in elections must be condemned by umpires. At the same time, we also condemn all attempts by participants who speak about the rule of law, while they engage in disruptive tactics to enforce their will. All these actions, as well as alleged misconduct by authorized officials, contribute to divisions and chaos in the society.

In such a deeply divided nation, it remains possible for the leaders of the major parties to deescalate the situation by finding a mutually agreeable solution. This can be done irrespective of the outcome in the courts, irrespective of the final declaration of results by GECOM, irrespective of local, regional and international observers finally signing off on a credible election result.

If nothing else, the events of the past week have underlined forcefully that regardless of who wins under this current winner take all system, Guyana as a whole loses. A seat one way or the other, a margin of victory one way or the other, will not solve this dilemma. We simply cannot continue to kick the can down the road for yet another five years. Postponing the problem will not make it disappear. We cannot continue to accept the reluctance of the two main political parties that have brought us to this point, a reluctance that so far seems totally oblivious to the consequences that have played out in such predictable and devastating ways this past week. The security of the supporters of one major party cannot be premised on the insecurity of the supporters of the other. It is a system that guarantees that most Guyanese, starting with those most vulnerable among us, will always be shut out.

Until the system changes, whoever wins, Guyana loses.

To the leaders of APNU-AFC and the PPP, we ask you to hold your heads high and operate with integrity and humility. We ask that you find the grace to enter without delay into talks to establish a national government based on the principle of parity. Such negotiations would necessarily have to be consistent with the constitution, but it is entirely possible to envision a situation, for example, in which the winner of the 2020 elections takes the presidency but asks their prime ministerial candidate to resign so that someone from the other major party can be appointed; and where a collective cabinet can be appointed. Such a compromise would also give greater latitude to MP’s to vote against the government instead of following the herd, offering greater opportunities for accountability against corruption.

This breathing space can be an opportunity to take a collective breath, and importantly provide an opportunity for our political leaders to work together on common issues. We do not anticipate that this will be easy. We call for it because it is precisely under such conditions of extreme political polarisation and mistrust that the hard but urgent and necessary work of healing for nation building is called for.

We do not claim originality in our proposal. The national spirit was evident in the political approach by leaders of both the PNC and PPP in the 1960s, in the face of a threat of lasting ethnic divisions. Following the breakdown of constitutional talks in London in the early 1960s, the leader of the PNC responded to the suggestion proposed by the United Nations anti-colonial committee for a PPP-PNC coalition to resolve the conflict, indicating that he would only agree on the condition of parity. It was a position that was not initially favoured by the PPP but members would later agree, with no less than the leader of the PPP becoming one of the foremost advocates of this position. This window of opportunity did not materialise, and over fifty years later we continue to experience the effects of that failure. No less of a visionary approach is demanded in the current situation, so much more dangerous and threatening to our beloved Guyana.

[From 1957, Moses Bhagwan became active in Guyanese public life and liberation politics through many organizations, including the People’s Progressive Party, the Progressive Youth Organization, The Success Movement, the Indian Political Revolutionary Associates, the Working People’s Alliance and the WPA Overseas Associates.

He served as a Member of Parliament from 1961-1968 and was also actively involved in community renewal, sports and religious affairs. Initially a teacher and civil servant, he became an Attorney at Law, practising in the Courts of Guyana since 1970. Moses Bhagwan now resides in New York He is the author of the book Ancestors of the River.

Eusi Kwayana, formerly Sydney King (born 4 April 1925),[1] is a Guyanese politician. A cabinet minister in the People's Progressive Party (PPP) government of 1953, he was detained by the British Army in 1954. Later he left the PPP to form ASCRIA (African Society for Cultural Relations with Independent Africa), a Pan-Africanist grassroots political group that, after a brief flirtation with the People's National Congress (PNC) of Forbes Burnham, fused into the Working People's Alliance (WPA).

During the 1940s he began to be politically active at the village level. Around 1947 (at that time known as Sydney King), he became a member of a small group of politicians, led by Cheddi Jagan, who formed the People’s Progressive Party.

After the PPP won in Guyana’s first election under universal adult suffrage, Kwayana became Minister of Communication and Works. After the British government suspended the constitution and threw the PPP out of office, in October 1953, Kwayana and others were made political detainees for fear that they would cause civil unrest. He was an executive member of both the PPP and subsequently the (PNC).

He is the author of several books.]