labor “We’re Not Going to Work Through Coronavirus”

The European country hit hardest by coronavirus, Italy has announced a near-total shutdown of shops and public venues, but many nonessential workplaces are still running. Refusing to let bosses risk their safety, workers are now going on strike. 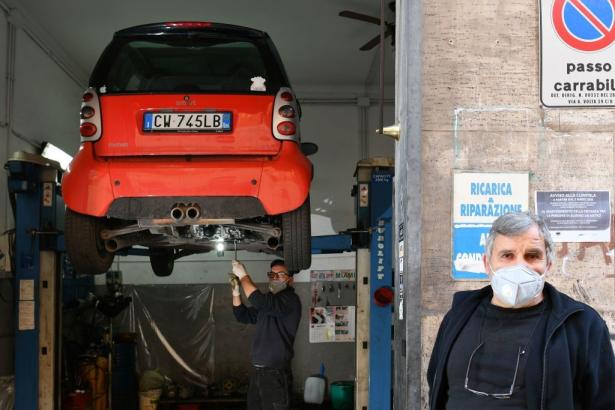 Italian mechanics Giacomo (R) and Alessandro are pictured at their garage on March 12, 2020 in Rome., Alberto Pizzoli / AFP via Getty

We’re not cannon fodder,” headlined La Repubblica, reporting the comments of Italian workers refusing to attend their shifts during the coronavirus. This isn’t the kind of strike where picketers gather at the factory gates. People are afraid — and they want the government to intervene.

Italy is the European country worst affected by coronavirus, closing in on 1,000 deaths at the time of writing. Yet even as it began implementing further travel restrictions over the weekend, the government allowed exemptions for “work reasons,” without making it clear what counted.

Giuseppe Conte’s government has closed many businesses. On Wednesday night, all “nonessential” retailers (leaving only supermarkets and drugstores) were told to shut down, as were public venues like bars, restaurants, and hairdressers. Yet this policy hasn’t been applied to workplaces in general — no matter the size.

Some workers have refused to put themselves at risk. On Tuesday, workers at the Fiat auto plant in Pomigliano, near Naples, were first to hit the headlines by taking strike action. The following day, the FCA group (the result of Fiat’s merger with Chrysler) announced that it was temporarily shutting the site down, along with three other Southern plants, at Melfi, Cassino, and Atessa.

At another FCA plant in Termoli, Molise, workers are on strike until March 14. Their union declared:

the big factories are places that bring people together, from the buses to the assembly lines to the canteen. It defies logic: the state closes everything, starting with the schools, and bans moving around — even issuing criminal sanctions for those who ignore the decrees. But unlike China, the Italian government has not closed the factories; it keeps saying “stay at home” even as the assembly lines continue producing and putting staff and all their families at risk.

And just like at other points in Italian history, the workers at the famous automaker have provided something of an example. This morning, 450 workers went on wildcat strike at clothing brand Corneliani, insisting “there are not Serie A and Serie B citizens [referring to the top two soccer leagues]; health is the same problem for everyone.”

La Repubblica further reported strikes at a steelworks in Terni and the Marghera shipyards in Venice; Il Secolo XIX reported a strike at the port of Genoa by dockers complaining that nothing had been done to clean their equipment. Alongside this kind of demand, workers have demanded an either partial or total shutdown until the crisis eases.

But striking is just part of the answer — not least because, until recently, unions themselves feared that an “over-the-top” reaction could pitch Italy into recession. Economy minister Roberto Gualtieri (of the center-left Democrats) has promised “no one will lose their jobs because of coronavirus,” moreover insisting that measures will also be taken to ensure that freelancers receive some continued payment.

Such moves are desirable, as far as they go, though unions have reported that layoffs have indeed begun. Most important, the need for a shutdown to contain the virus demands that it’s not left up to individual employers to decide whether to force their staff to show up. Brescia CGIL union secretary Francesco Bertoli highlighted that some businesses working to orders would struggle to cope with a shutdown and themselves need aid.

There are also clear signs of profiteering — and not just in the sale of masks. Companies like food delivery firm Deliveroo are taking advantage of the drop-off in restaurant customers — and the fact that more people are stuck at home — even though this means their own workers are more at risk and could even help to spread the virus. Sole traders such as electricians or plumbers have equally been left to decide for themselves.

On March 3, it was announced that there would be a €500 a month payment, for two months, for those on partite IVA (self-employed and freelancers) in the hardest-hit “red zones” unable to work. It has also been announced that there will be up to €1,000 a month for workers laid off during the crisis. Other measures have promised a suspension of mortgage and bill payments — though, decisively, not of rents.

What remains to be seen is whether the €3.3 billion put aside for these payments will be anything close to proportional to the scale of the crisis, expected as it is to cover almost a million workers. There is also the thorny problem of whether workers will have to “compensate” for lost time — Giorgio Gori, mayor of Bergamo (a center of the outbreak) suggested that the usual August holidays could make up for this period.

In a country that has long been forced by Brussels to cut public spending (despite running a primary surplus for two decades), there is annoyance at the lack of European help. La Stampa noted that the European Union’s €7.5 billion fund for coming weeks (part of a total €25 billion package) will do no more than allow governments to use funds they already have, regardless of how affected they are.

Hardest hit among all European countries, Italians are showing real resilience, while also benefiting from a health system that proclaims your right to treatment doesn’t depend on your ability to pay. Yet the economic effects of the crisis are real — forcing workers to take a risk even as tourists are told to stay away. The strikes are about insisting that society, as a whole, shoulders the burden, not those living paycheck to paycheck.

As the workers at FCA Termoli put it:

We’ll withdraw the protest only when the government and the company decide to stop everything and pay our time off. We can’t afford to lose more money for an inalienable right — to make our collective health and safety the top priority.