film Want to Understand How a Pandemic Upends Everyday Life? The Movies Can Tell You

The 1938 Oscar-winning “That Mothers Might Live,” about the groundbreaking work a 19th century hungarian doctor Ignaz Semmelweis, explains how this man of science saved millions of lives, through the simple suggestion: wash your hands! 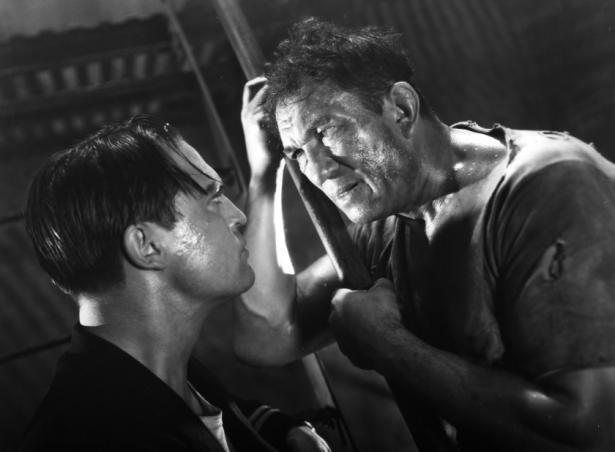 1939 "Pacific Liner:” The film’s central conflict is between two very different men: a doctor who wants to implement drastic quarantining and sanitation measures as soon as the outbreak begins; and a burly tough guy who refuses to believe in science., Turner Classic Movies

Back in 1939, RKO released the movie “Pacific Liner,” about the chaos that ensues when a cholera-infected man stows away on a cruise ship bound for San Francisco. As the disease spreads among the working men in the boiler room, the paying passengers party on as usual on the decks above, kept intentionally unaware of the bacterial time bomb ticking down below.

In times like these — with the world reeling from the COVID-19 pandemic — we’ve all found ourselves flinching every time our phone buzzes or our smart watch dings. Each news alert drags us deeper into the unprecedented, be it the cancellation of major sporting events or the dizzying drops in the stock market.

But as anyone who watches a lot of old movies can tell you, the looming specter of a devastating plague isn’t as novel as some may think. If anything, Hollywood has been preparing us for this moment for over a century.

Again, just look at “Pacific Liner.” The film’s central conflict is between two very different men: a doctor (Chester Morris), who wants to implement drastic quarantining and sanitation measures as soon as the outbreak begins; and a burly tough guy (Victor McLaglen), who refuses to believe that anything he can’t see can hurt him. By the time the doc is proved right, it’s almost too late.

Clearly, pandemics and their aftermath are subjects a lot of us are interested in at the moment. Over the past month, the 2011 thriller “Contagion” has been near the top of the digital streaming bestseller lists, ever since news of the current novel coronavirus strain became impossible for Americans to ignore.

Yet even during the best of times, we’ve had a fascination with stories about the superbugs bent on depopulating our planet. In 1971, audiences turned out for “The Andromeda Strain,” an adaptation of Michael Crichton’s entertainingly wonky science-fiction novel, about the efforts of some brilliant doctors to defend against a microscopic threat from outer space. In 1995, “Outbreak” became a surprise smash with its heavily fictionalized take on the Ebola-themed Richard Preston nonfiction bestseller “The Hot Zone.” We’ve long been fascinated by the big-screen spectacle of sick people spreading their infection.

Movies about pandemics tend to fall into three categories: the kind that, like “Pacific Liner” and “Contagion,” deliver a blow-by-blow description of how a real outbreak might spread; the kind that are more fantastical, and use the spread of disease more as a metaphor — think zombies and aliens; and, finally, the kind that take place in the wake of the catastrophe, and suggest how we might start over.

More than 60 years before “Contagion,” Elia Kazan directed an early example of the first kind of epidemic movie, 1950’s chillingly realistic “Panic in the Streets.” Richard Widmark stars as a New Orleans-based public health official who’s trying to piece together the identity and the history of a disease-ridden corpse. Before long, he finds himself at odds with the gangsters who killed his John Doe. He also riles up the press, the local government and several working-class ethnic communities.

Kazan borrows stylistic elements from neorealism and film noir to put viewers in Widmark’s shoes, letting us experience what it might be like to be the voice of reason in a society that sees no upside to confronting or even acknowledging the threat that could decimate it — be it crime, poverty, political subversion or, yes, plague.

For an even more nightmarish version of this scenario, watch George Romero’s 1973 horror film “The Crazies,” which imagines a medical crisis devolving into a standoff between an irrationally panicked citizenry and the armed government officials who stand ready to use extreme measures to terminate an outbreak at its source. Romero is best known for his zombie classics “Night of the Living Dead” and “Dawn of the Dead” (which, in a way, are pandemic movies too). “The Crazies,” though, may be his most primal howl of despair over humanity’s tendency to self-destruct. It’s a dark but instructive vision of how bad an epidemic can get.

If you prefer your microbial monsters to be more way-out and weird, there are options aplenty beyond Romero’s fanatics and ghouls. For example, American cinema has produced multiple adaptations of novelist Jack Finney’s pulp classic “The Body Snatchers,” which considers what might happen if the world were stealthily invaded by alien seed pods that absorb human personae. It’s also been hard lately not to think about John Carpenter’s 1982 version of “The Thing,” about an extraterrestrial parasite that tricks humans into becoming a host, and is thus all but unstoppable unless people go into complete isolation — radical “social distancing,” as it were.

One of the most unusual of the science-fiction/horror plague stories is 2008’s “Pontypool,” starring Stephen McHattie as an Ontario talk radio host who can’t stop himself from stirring up trouble with his words — even after he discovers that the people in his quarantined small town are being driven mad by language itself. The sickness spreads through conversation. How unsettling is that?

None of these films are about real-world concerns — at least not overtly. They’re more about distrust and paranoia. They’re not meant to show us the nuts and bolts of how we might behave during an actual epidemic; they’re cautionary tales, warning us to be aware of how our deeper flaws could make an awful situation worse.

And where does this all lead? For answers to that, turn to movies like “28 Days Later” and “28 Weeks Later,” which show people racing to reconstruct some kind of functioning society in the midst of a viral contagion. Or watch “The Omega Man” (or any of the other big-screen versions of Richard Matheson’s novel “I Am Legend”), where one of the only survivors of a pandemic struggles to keep himself entertained — mostly by killing the mutated humanoids who’ve overrun the Earth.

Better yet, watch 2006’s “Children of Men,” set 18 years after a plague of infertility reduces humankind to a dwindling species, mired in despair and riven by economic disparity due to a lack of human resources. The movie’s plot is about the world’s frenzied and potentially dangerous reaction to the first new pregnancy in nearly two decades. But what really lingers about “Children of Men” — and “The Omega Man” and the “28 Days” movies as well — is the portrait of how we might spend our days in the possible world to come. If we’re alive, we should do something productive to occupy our time. But what?

The point is that the people who make motion pictures have been thinking about the potential for some kind of global viral disaster — be it natural or supernatural — for a long time. We have lots of movies to consult about this subject, with lots of possibly helpful dos and don’ts.

Not all of them end in a hopeless place, either. “Pacific Liner” has a happy ending. So — in a way — does “Children of Men.”

Then there’s perhaps the cheeriest disease movie of them all: the 1938 Oscar-winning short “That Mothers Might Live,” about the groundbreaking work of the 19th century doctor Ignaz Semmelweis. The film explains how this Hungarian man of science saved countless millions of lives, through the simple suggestion he shared with his colleagues that anyone can follow.

He told people to wash their hands.