"Lawmakers must respond to this pandemic in a way that yanks us back from the abyss and actually prevents future catastrophes." 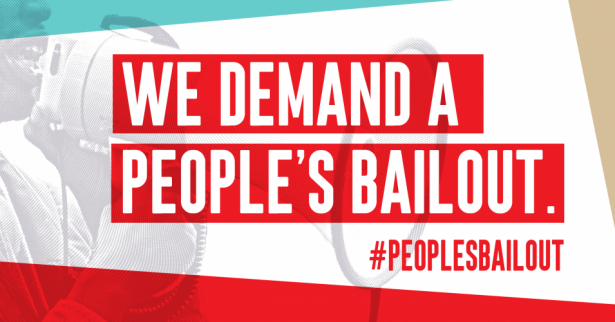 "This is a time to be decisive in saving lives, and bold in charting a path to a genuinely healthier and more equitable future through a just recovery.", People's Bailout

Seven congressional Democrats have joined over 500 progressive groups in demanding that federal lawmakers respond to the ongoing coronavirus pandemic with a "People's Bailout" that prioritizes public health and economic relief for workers over corporations while taking steps to prevent future crises.

"Our people were already struggling, and we refuse to die just to save Wall Street."
—Kaniela Ing, People's Action

The call for a #PeoplesBailout, crafted by a dozen advocacy organizations and now endorsed by hundreds more, urges members of Congress to commit to five principles while putting forth COVID-19 relief and stimulus packages that contribute to a just recovery:

1. Health is the top priority, for all people, with no exceptions.
2. Economic relief must be provided directly to the people.
3. Rescue workers and communities, not corporate executives.
4. Make a downpayment on a regenerative economy while preventing future crises.
5. Protect our democratic process while protecting each other.

Those principles were detailed in a Dear Colleague letter sent out by Sen. Ed Markey (D-Mass.) and Rep. Debbie Dingell (D-Mich.) that said:

As we work to advance further spending packages to ensure immediate relief and long-term recovery, we need to consider the interrelated crises of income and wealth inequality, racism, and ecological decline, which were in place long before COVID-19, and now risk being intensified.

The seven Democratic lawmakers' support for a People's Bailout came as the Senate continued to debate a third coronavirus package pushed by the GOP, which is widely opposed by progressive lawmakers and activists for giving too much to corporations while not enough to workers.

"The COVID-19 pandemic demands swift and unprecedented action from the federal government," declares the People's Bailout website. "This is a time to be decisive in saving lives, and bold in charting a path to a genuinely healthier and more equitable future through a just recovery."

"This is a pivotal moment for Congressional Democrats, and it's a chance to show our party learned something from the 2008 financial crisis," Varshini Prakash, executive director and co-founder of the Sunrise Movement, said in a statement Tuesday. "Gambling trillions of tax dollars on stimulating the stock market can't fix the shortage of hospital beds, or the pollution in our skies."

"We have a choice to make," Prakash continued. "Will we let the Trump administration spend hundreds of billions bailing out just the financial industry and massive corporations, or will we put millions of people to work tackling the dual crises of COVID and climate change?"

Sunrise political director Evan Weber highlighted congressional Republicans' efforts to give President Donald Trump "a $500 billion blank check to bail out any corporation he wants and to spend $3 billion driving up the price of oil for consumers at the pump to protect oil companies' profits."

"Is it so ridiculous," Weber asked, "to suggest that if the government is going to give money to a company right now that we should ensure the money is going to workers not executives and toward preventing the second biggest global crisis: climate change?"

People's Action climate justice campaign director Kaniela Ing also expressed concerns about congressional efforts to use the coronavirus crisis "to jam through massive giveaways to corporations instead of saving the people and communities hurt most by Trump's failure to act."

"Our people were already struggling, and we refuse to die just to save Wall Street," Ing said in a statement. "Lawmakers must respond to this pandemic in a way that yanks us back from the abyss and actually prevents future catastrophes."

Warning that "if we don't act in a forward-thinking way, other crises are just over the horizon," Ing added that "COIVD-19 is only a microcosm of what climate calamity will look like. And this week demonstrated how unprepared we are."

The People's Bailout aligns with demands from other new campaigns along with experts and activists that policymakers worldwide learn from this pandemic and use it as an opportunity to tackle the climate emergency. The public health crisis has provoked fresh calls for Congress to enact a "Green Stimulus" and world leaders to pursue a global Green New Deal.