Calling on city and landlords to provide relief amid coronavirus pandemic: ‘The hammer is going to drop’ 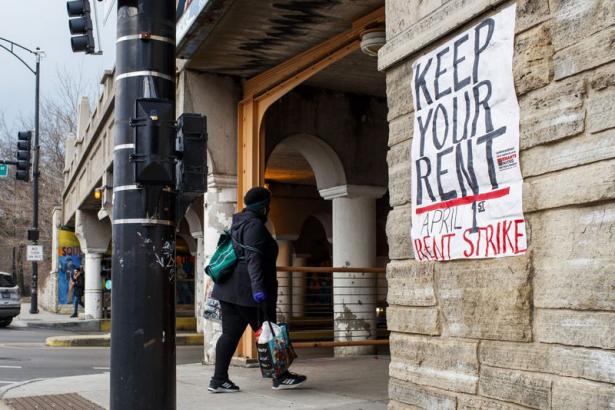 Pedestrians walk by a rent strike sign near a Metra stop in the Hyde Park neighborhood on March 25, 2020, in Chicago., Armando L. Sanchez / Chicago Tribune

Wednesday, April 1, is a looming deadline for many who have found themselves out of work due to the coronavirus pandemic.

Rent will be due for thousands of Chicagoans, the first major test of their finances since Gov. J.B. Pritzker issued a statewide stay-at-home order that left many unable to work, and others forced to choose between making a living and avoiding exposure by staying home.

Theodore Bourget, 23, lost both of his jobs, at a bar and a University of Chicago performance venue, because of the outbreak. Now without any source of income, he and his partner are struggling to afford their Hyde Park apartment.

“It was beyond stressful," Bourget said. “We were just operating at a level where panic wasn’t even an option anymore.”

Chicagoans like Bourget are joining a growing call for a rent strike, both locally and nationwide. From Andersonville to Beverly, from Hyde Park to Humboldt Park, residents are working together to pressure rental companies and landlords into forgoing rent charges or evictions until things return to normal. They’ve posted signs, shared the #rentstrike hashtag and displayed white sheets from windows in a show of solidarity.

Others, including landlords with portfolios big and small, prefer more balanced measures in the hopes of weathering the crisis. And while politicians are searching for a solution, they acknowledge it could take time to work its way through clogged bureaucratic channels.

As of Friday night, an online petition had gathered more than 12,300 signatures calling on Mayor Lori Lightfoot to issue an indefinite freeze on rent, mortgages and utility payments across the city of Chicago. It also asks the Cook County Circuit Court to ban new filings for eviction or foreclosure.

On Friday, Lightfoot announced a city grant program that will give $1,000 payments to 2,000 Chicagoans “who have lost their jobs or otherwise been impacted by the economic fallout from the COVID-19 pandemic.”

The mayor’s office did not respond to questions about her position on a citywide rent freeze, but directed residents to the city’s coronavirus-driven housing resources.

But the city’s grants and the county’s current eviction moratorium — which allows landlords to file court paperwork for eviction but paused court proceedings — aren’t enough, said Jake Marshall, an organizer with Autonomous Tenants Union, the group that launched the online petition.

“As soon as the moratorium is lifted, the hammer is going to drop,” Marshall said. “That puts me in the position of taking the extra risk and going to work” to keep paying rent.

Freezing mortgages and utility payments is also vital because that gives landlords the financial bandwidth to forgive missed payments, he said.

“It doesn’t do anything to not take care of (landlords), because then it’s just the banks that evict the tenants instead,” Marshall said. 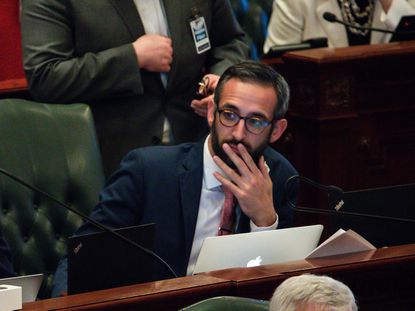 The petition is endorsed by Chicago housing advocacy groups, along with public officials including Alds. Rossana Rodriguez Sanchez, 33rd, and Carlos Ramirez-Rosa, 35th, and state Reps. Will Guzzardi and Delia Ramirez, both D-Chicago.

But as COVID-19′s impact worsens, the government is straining to solve a flood of problems, making it difficult to get every issue addressed in a timely manner.

“We’re trying to elevate these concerns to the governor’s team,” Guzzardi said. “I feel housing hasn’t risen quite to the forefront of their response, because they have so many other aspects of this crisis to focus on.”

But for many, time is almost up. 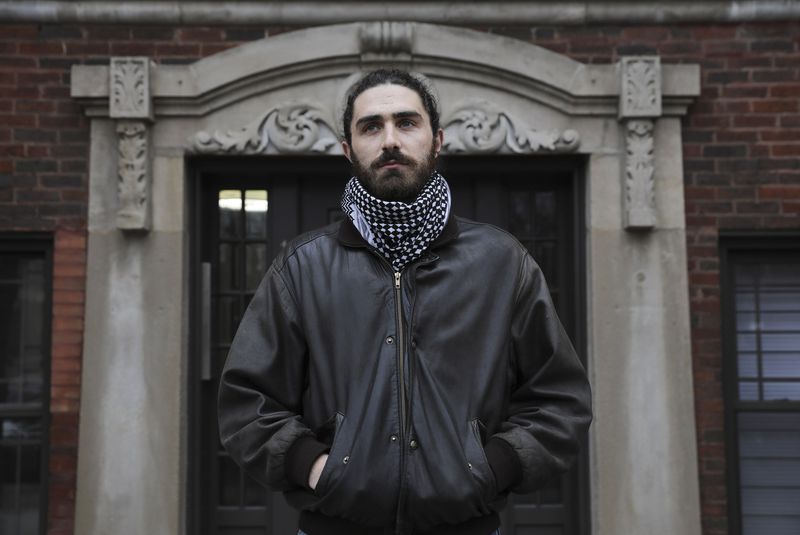 Zak Witus, who is helping to organize a rent strike due to instability created by the coronavirus, stands outside his apartment in Hyde Park on March 26, 2020.(Abel Uribe / Chicago Tribune)

As Bourget and his partner got in touch with fellow tenants of the 100 buildings in Hyde Park owned by Mac Properties, they found others who were frustrated by a lack of response from the company, he said.

“We’ve been receiving sort of radio silence from Mac Properties,” he said. “They said they were talking about what to do, but they never came back to us with a plan. They just sent us our invoices.”

Zak Witus, 26, said it was the company’s “callous response” that prompted talks of a rent strike among its tenants, even those who can afford it. Despite attention from news outlets like the Hyde Park Herald and Block Club Chicago, their concerns went unheeded.

“Tenants were calling to ask for a little bit of compassion in the midst of this crisis,” Witus said. “There are people who could probably get the money together if they had to for April, but (a collective rent strike) would be in solidarity with those who absolutely cannot pay because of a loss of income.”

They sought advice from Tenants United Hyde Park Woodlawn, which launched two years ago to connect South Side renters. The group has become a rallying point for rent strike supporters, and it has heard from renters across the city — and as far as Jerusalem — who want to organize.

Some, like Bourget, are prepared to pay rent Wednesday to avoid retaliation. But come May 1, they may be out of money and out of options.

“Tenants United has made it very clear that anybody who wants to withhold rent needs to be extremely aware of the potential consequences,” he said. “We don’t know what’s going to happen when the eviction ban has been lifted.”

Witus knows refusing to pay rent could lead to his eviction once court proceedings resume, but he feels sure of his decision.

“I’d much rather use the money I have now to support people who are out of work,” he said. “But I should also say I’m scared for myself. I don’t know what unforeseen expenses I’m going to have. I’m currently uninsured, and I’m worried I’m going to have to pay tens of thousands of dollars to cope with COVID-19 should I become infected.”

Over a rapidly shifting two weeks, Mac Properties assessed the situation, waiting to see how government bodies would respond to the pandemic, said Peter Cassel, director of community development.

As the situation became increasingly dire, “we’ve come to an understanding,” he said. “For any of our residents who are under financial pressure because of the pandemic, we encourage them to call us, and we will come together to a solution.”

Cassel said the company has always been willing to set up payment plans or help tenants downsize when they’ve had trouble paying rent.

“That was true long before the pandemic,” he said. “I cannot think of an instance with a resident who was trying to work with us to solve a problem that resulted in an eviction filing.”

To Witus, the offer rings hollow.

To Cassel, although Mac Properties, which spans three cities and has long been accused of contributing to the gentrification of Hyde Park, may seem like an easy target, the rent it collects impacts more than just its own bottom line.

The same goes for landlords who might own just a couple of properties but depend on rent to stay afloat. Arpan Shah owns a condo in suburban Niles and a three-flat in Rogers Park. While he was able to offer one couple a $300 discount for April, his pockets only go so deep.

“If I get some kind of relief, I’m happy to pass it on,” he said. “But if they’re asking it of me, they’ll be straining me in a few months.”

Shah, who also works as a home lending adviser, said he hopes Illinois will work out a deal with major banks like in California, where lenders have agreed to provide mortgage relief. He encouraged fellow landlords to contact lenders and see if payments can be deferred.

“Everybody is trying to change the world, but it starts with you,” he said. “It starts with $300 off. If the bank gives relief on a loan, then give your tenants some of that relief too.”

But the state can’t rely on good-natured landlords to save the day, Guzzardi said.

“We’re not going to solve this problem by banking on the goodwill of individuals,” he said. “We need policy change that’s going to protect everybody.”

It’s a precarious situation for many in Chicago, where half of renters pay more for housing than they can afford.

“It’s a particularly challenging time for people who are housing insecure,” Guzzardi said. Even last-resort housing alternatives like living with a relative or staying in shelters, the congressman noted, are “pretty much nonexistent" during the pandemic.

“This crisis is revealing some of the profundity of these social failures,” he said. “And we need a societal response to a societal crisis.” 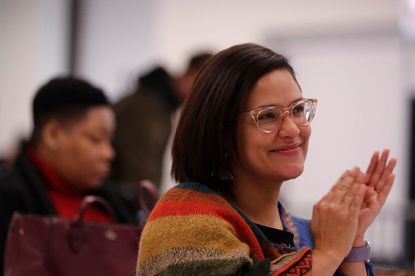 Rodriguez Sanchez, a freshman alderman representing parts of Avondale, Irving Park, Albany Park and Ravenswood Manor, said the city is already grappling with how to help homeless residents find shelter during the pandemic. Evictions would only further the problem, even after the stay-at-home order is lifted, she said.

“We have to make sure we are not putting people at risk of being evicted down the line," she said Friday. “We’re not talking about one or two families; we’re talking about hundreds of people that would end up in the street. It would be a disaster.”

Subsequently, she said, any efforts to help should focus specifically on helping those who need it most.

“The well-being of the working-class people needs to be the main consideration — not mortgage companies, not whether the banks get paid or not,” she said. “We see bailouts for banks because they are ‘too big to fail,’ but if we are going to give money to banks, they need to be responsible for the rest of us.”

Ariel Cheung is a real estate and features editor at the Chicago Tribune. Her work in Chicago has sent her everywhere from the Cubs World Series parade and the city’s finest restaurants to crime scenes and teacher picket lines. Currently, she delves into the city’s housing market, real estate trends and other aspects of the industry. 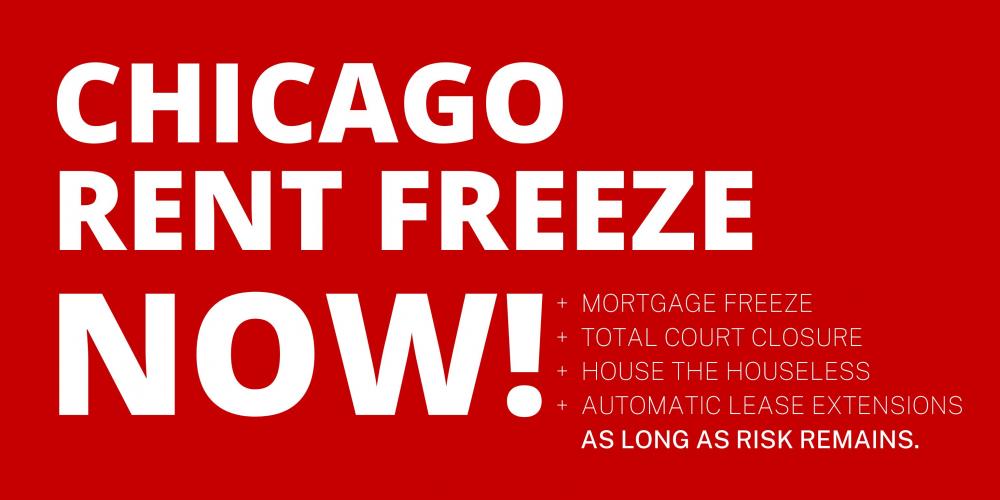 [Portside moderator: View and sign the Chicago Rent Freeze Now petition HERE on the Action Network website.  Action Network is an open platform that empowers individuals and groups to organize for progressive causes.  Click HERE to track coronavirus data in Illinois compiled by David Eads of The Chicago Reporter]