Clinical and design considerations will be published online; goal is to support rapid scale-up of device production to alleviate hospital shortages. 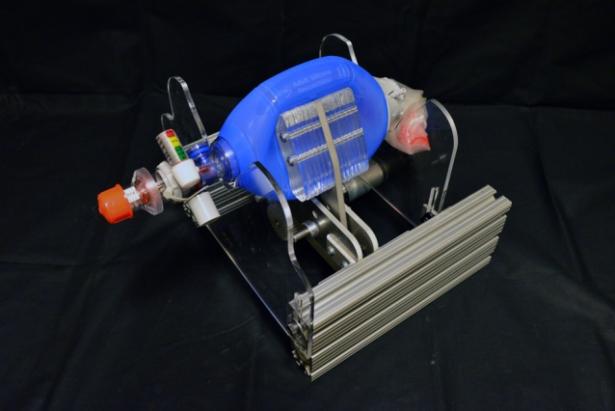 The new device fits around an Ambu bag (blue), which hospitals already have in abundance. Designed to be squeezed by hand, they are squeezed by mechanical paddles (center) driven by a small motor. This directs air through a tube to the patient's airway, MIT E-Vent Unit 002 Setup, Image by MD

One of the most pressing shortages facing hospitals during the Covid-19 emergency is a lack of ventilators. These machines can keep patients breathing when they no longer can on their own, and they can cost around $30,000 each. Now, a rapidly assembled volunteer team of engineers, physicians, computer scientists, and others, centered at MIT, is working to implement a safe, inexpensive alternative for emergency use, which could be built quickly around the world.

The team, called MIT E-Vent (for emergency ventilator), was formed on March 12 in response to the rapid spread of the Covid-19 pandemic. Its members were brought together by the exhortations of doctors, friends, and a sudden flood of mail referencing a project done a decade ago in the MIT class 2.75 (Medical Device Design). Students working in consultation with local physicians designed a simple ventilator device that could be built with about $100 worth of parts. They published a paper detailing their design and testing, but the work ended at that point. Now, with a significant global need looming, a new team, linked to that course, has resumed the project at a highly accelerated pace. 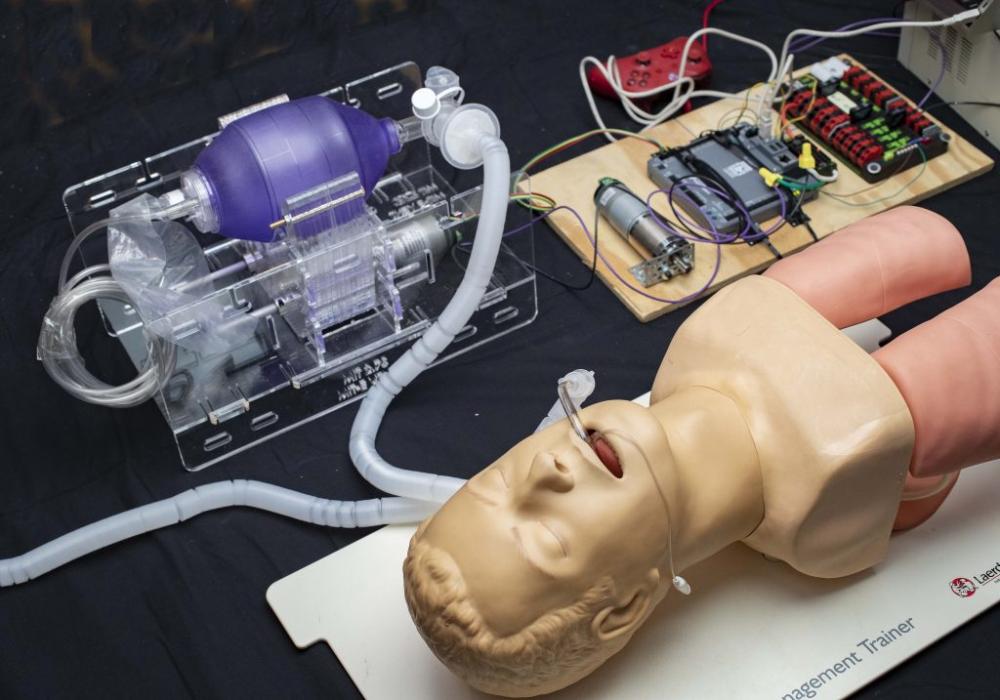 The key to the simple, inexpensive ventilator alternative is a hand-operated plastic pouch called a bag-valve resuscitator, or Ambu bag, which hospitals already have on hand in large quantities. These are designed to be operated by hand, by a medical professional or emergency technician, to provide breaths to a patient in situations like cardiac arrest, until an intervention such as a ventilator becomes available. A tube is inserted into the patient’s airway, as with a hospital ventilator, but then the pumping of air into the lungs is done by squeezing and releasing the flexible pouch. This is a task for skilled personnel, trained in how to evaluate the patient and adjust the timing and pressure of the pumping accordingly.

The innovation begun by the earlier MIT class, and now being rapidly refined and tested by the new team, was to devise a mechanical system to do the squeezing and releasing of the Ambu bag, since this is not something that a person could be expected to do for any extended period. But it is crucial for such a system to not damage the bag and to be controllable, so that the amount of air and pressures being delivered can be tailored to the particular patient. The device must be very reliable, since an unexpected failure of the device could be fatal, but as designed by the MIT team, the bag can be immediately operated manually. 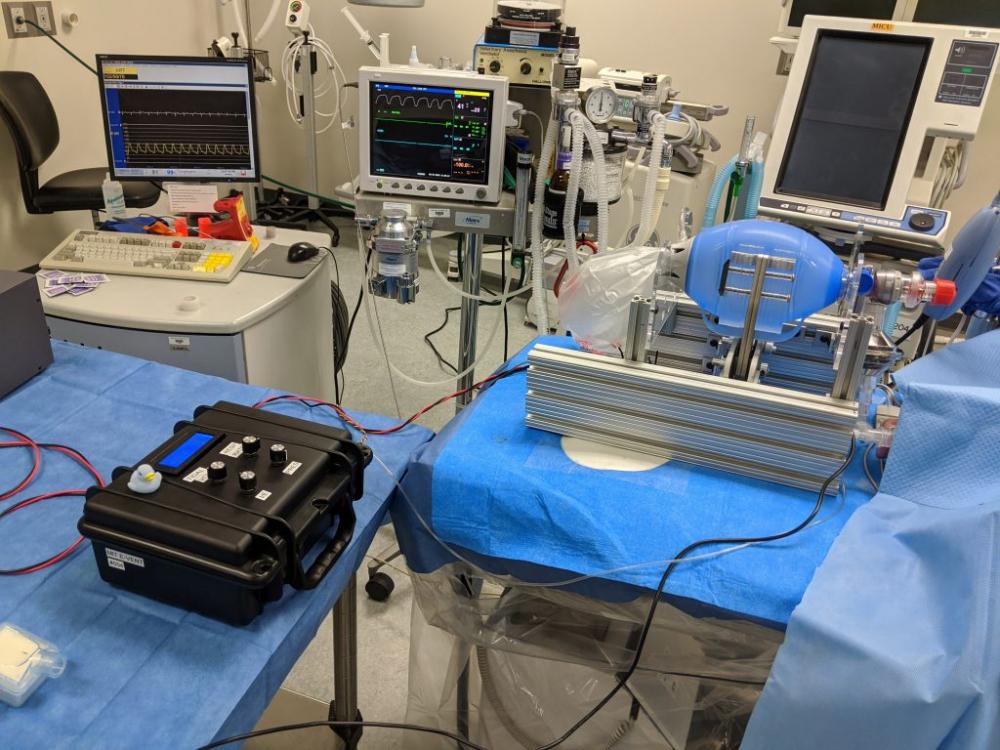 The team is particularly concerned about the potential for well-meaning but inexperienced do-it-yourselfers to try to reproduce such a system without the necessary clinical knowledge or expertise with hardware that can operate for days; around 1 million cycles would be required to support a ventilated patient over a two-week period. Furthermore, it requires code that is fault-tolerant, since ventilators are precision devices that perform a life-critical function. To help curtail the spread of misinformation or poorly-thought-out advice, the team has added to their website verified information resources on the clinical use of ventilators and the requirements for training and monitoring in using such systems. All of this information is freely available at e-vent.mit.edu.

“We are releasing design guidance (clinical, mechanical, electrical/controls, testing) on a rolling basis as it is developed and documented,” one team member says. “We encourage capable clinical-engineering teams to work with their local resources, while following the main specs and safety information, and we welcome any input other teams may have.”

The researchers emphasize that this is not a project for typical do-it-yourselfers to undertake, since it requires specialized understanding of the clinical-technical interface, and the ability to work in consideration of strict U.S. Food and Drug Administration specifications and guidelines.

Such devices “have to be manufactured according to FDA requirements, and should only be utilized under the supervision of a clinician,” a team member said. “The Department of Health and Human Services released a notice stating that all medical interventions related to Covid-19 are no longer subject to liability, but that does not change our burden of care.” he said. “At present, we are awaiting FDA feedback” about the project. “Ultimately, our intent is to seek FDA approval. That process takes time, however.”

The all-volunteer team is working without funding and operating anonymously for now because many of them have already been swamped by inquiries from people wanting more information, and are concerned about being overwhelmed by calls that would interfere with their work on the project. “We would really, really like to just stay focused,” says one team member. “And that’s one of the reasons why the website is so essential, so that we can communicate with anyone who wants to read about what we are doing, and also so that others across the world can communicate with us.”

“The primary consideration is patient safety. So we had to establish what we’re calling minimum clinical functional requirements,” that is, the minimum set of functions that the device would need to perform to be both safe and useful, says one of the team members, who is both an engineer and an MD. He says one of his jobs is to translate between the specialized languages used by the engineers and the medical professionals on the team.

That determination of minimum requirements was made by a team of physicians with broad clinical backgrounds, including anesthesia and critical care, he says. In parallel, the group set to work on designing, building, and testing an updated prototype. Initial tests revealed the high loads that actual use incurs, and some weaknesses that have already been addressed so that, in the words of team co-leads, “Even the professor can kick it across the room.” In other words, early attempts focused on super “makability” were too optimistic.

New versions have already been fabricated and are being prepared for additional functional tests. Already, the team says there is enough detailed information on their website to allow other teams to work in parallel with them, and they have also included links to other teams that are working on similar design efforts.

In under a week the team has gone from empty benches to their first realistic tests of a prototype. One team member says that in the less than a week full they have been working, motivated by reports of doctors already having to ration ventilators, and the intense focus the diverse group has brought to this project, they have already generated “multiple theses worth” of research.

The cross-disciplinary nature of the group has been crucial, one team member says. “The most exciting times and when the team is really moving fast are when we have an a design engineer, sitting next to a controls engineer, sitting next to the fabrication expert, with an anesthesiologist on WebEx, all solid modeling, coding, and spreadsheeting in parallel. We are discussing the details of everything from ways to track patients’ vital signs data to the best sources for small electric motors.”

The intensity of the work, with people putting in very long hours every day, has been tiring but hasn’t dulled their enthusiasm. “We all work together, and ultimately the goal is to help people, because people’s lives understandably hang in the balance,” he said.

If you would like to help support the all-volunteer MIT team, please consider making a donation. Donations to MIT are tax deductible. We are working long hours, spending fast and, because this project was launched in under a week, we are not a funded research project. You may donate directly below. For large donations, contact the team.