This op-ed argues that people swooning over the New York governor's steady hand during the coronavirus crisis should look at his record in office. 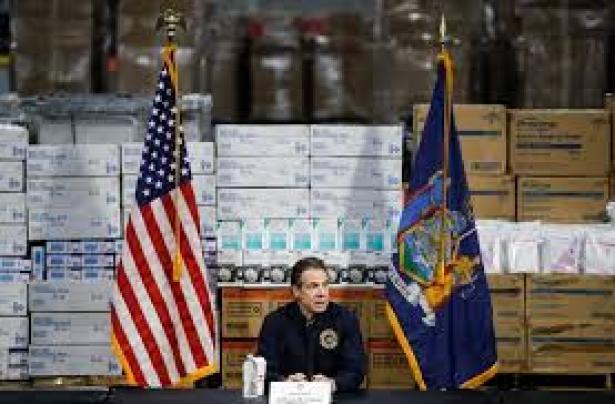 Gov. Andrew Cuomo speaks against a backdrop of medical supplies at the Jacob Javits Center that will house a temporary hospital in response to the coronavirus outbreak., AP Photo/John Minchillo

Everyone wants a quarantine crush. That doesn’t mean you need to settle for Andrew Cuomo.

These days, everywhere you look, people are swooning over New York’s governor. He’s “a keeper,” “my only friend,” and “the closest thing we have to an FDR.”

Yes, the governor is providing an easy contrast to Donald Trump by holding clear, calming press conferences, and offering facts, not falsehoods, to the American people.

But shouldn’t the bar be higher for a corona-inspired crush? In times of panic-induced infatuation, let’s remember that someone can be a better leader than Trump during a crisis and still not deserve our praise. Particularly when the leader in question helped set the stage for many of the devastating challenges we now face as coronavirus sweeps the nation.

As our state and federal governments struggle to provide enough testing, hospital beds, and ventilators to contain coronavirus, we must ask why one of the wealthiest countries in the world is so woefully unprepared for this pandemic. Yes, Trump has tried to defund the Centers for Disease Control and Prevention, told Americans that coronavirus is a hoax, and has generally left reality in the dust. But how did we get here in the first place?
Despite Cuomo’s recent efforts to brand himself as a “progressive,” the governor has led as a corporate-friendly Democrat for years — putting himself and his wealthy donors above the well-being of working New Yorkers. He’s provided inadequate funding for public housing, gone to war with labor unions, and vetoed protections for low-wage workers. While many Democrats in red states brave steep resistance to defend progressive policies, Cuomo has blocked pro-worker policies in solid-blue New York. He put single-payer health care on ice, refused to fully fund public schools, and cut critical housing vouchers for formerly homeless families. The list goes on. (Teen Vogue has reached out to Cuomo’s office for comment).

Cuomo comes from a wing of the Democratic Party that abandoned its New Deal roots to please big donors. These aren’t just Southerners doing what they can to stay in office in a swing state; many of these corporate Democrats hail from cities and states where Republicans aren’t competitive. Cuomo has good company in former Chicago mayor Rahm Emanuel, who laid off hundreds of public school teachers, and former California governor Jerry Brown, who cut over $4 billion in funding from Medi-Cal, welfare-to-work, and disability services to balance a budget. And let’s not forget Cuomo’s boss in the 1990s, Democratic president Bill Clinton, who first proclaimed to the entire country: “The era of big government is over.”

Even now, as he publicly asks the federal government to send more ventilators and beds to New York, Cuomo has governed his state as a corporate Democrat — declining to put working people first. The governor has been trying to cut millions in Medicaid funding to balance the state budget, once again telling low-income New Yorkers that their health care is not a priority. Rather than ask millionaires and billionaires in New York to pay their fair share as our state economy collapses, the governor began pushing for unilateral power to slash government services throughout the year without legislative approval. And with rent due on April 1, Cuomo issued a moratorium on mortgages for homeowners but has so far failed to issue a rent freeze for tenants, leaving countless working-class New Yorkers to fend for themselves in a time of widespread unemployment and income loss.

For decades, Cuomo and corporate Democrats like him have refused to use the power of our government to support and empower working people and the most vulnerable in our society. So it’s hardly a surprise that over the years so many voters have lost faith in the Democratic Party — and stopped believing a strong, well-funded government could make the lives of working people better.

Of course, Trump alone carries the blame for his horrific mismanagement and his immoral lies, which are now compounding the spread of coronavirus. But long before Trump was elected, Democrats spent decades destroying the idea that we are the party that protects working people rather than corporate interests. Before we keep crushing on Cuomo, it’s worth asking how we ended up here.