Huerta’s approach to activism is to take it day by day, victory by victory. Building a movement is the work of a lifetime; it takes time, commitment and hope. 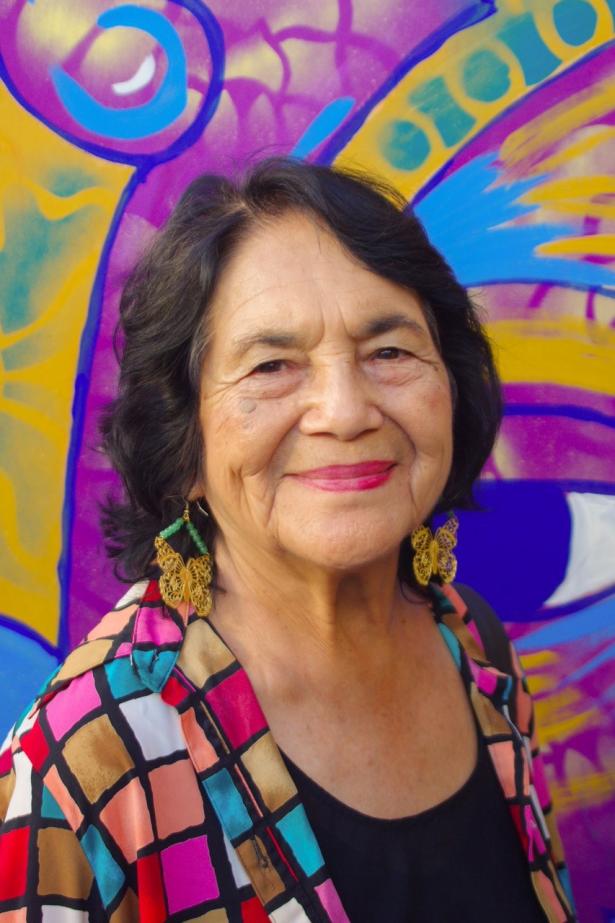 Dolores Huerta turns 90 today and has been engaging in all kinds of activism since 1962. Born in Dawson, a mining town in New Mexico, Huerta was the second child of Juán Fernandez, a farmworker, miner, and first-generation immigrant, and Alicia Chávez, who owned a small hotel. After her parents divorced, Huerta grew up in Stockton, California, where she watched her mother generously give to the community by providing free or affordable housing to low-wage workers and engaging in community affairs. After training to be a teacher, Huerta was drawn to labor activism because she witnessed economic inequality in her elementary school classroom. Huerta believed she could do more for farmworkers by organizing a union to fix income inequality than teaching the farmworkers’ children.

When she co-founded the United Farm Workers Union with César Chávez, Huerta was a pioneer in the field of labor activism in the U.S., being the second woman in a high position in labor unions at the time after Penny Singleton of the American Guild of Variety Artists. Her work with Chávez to bring attention to the inhumane working conditions of farmworkers in California resulted in one of the most successful product boycotts in the history of the United States in 1965. She became the lead negotiator between workers and growers — the first woman to do so in the U.S., and she has been honored for her work on immigration rights, farmworkers’ rights, and women’s rights — always tying together the issues of racial discrimination, labor rights, and immigration.

In 2020, Huerta’s activism exists in arguably one of the most relevant intersections of social justice issues: immigration, workers’ rights, and feminism. Her work with the Dolores Huerta Foundation, a nonprofit she co-founded with her daughter Alicia, provides training in civic engagement for low-income populations, advocacy work for LGBTQ youth, and training and resources for rural populations among many other actions that encourage the weaving of different movements into a “much larger tapestry of justice and universal human rights.” In an interview with ZORA, she spoke of developing a practice of inclusive grassroots organizing at a time when intersectionality was still a budding concept and unions were male-dominated.

“You’re talking about a framework of social justice issues and human rights issues,” Huerta explains. “… It means that working people need to be supported and need to have their equal rights protected, and so do women and so do people of color. … They need to be protected and not be oppressed and humiliated and not mistreated. And I think that’s where they come together.”

“We might not win immediately, but if we just keep our eye on the prize, we will accomplish our goals, and we will win. And the thing is not to give up! And have fun when you’re doing it if you can. Celebrate your victories.”

For Huerta, putting gender, race, and labor together as a political framework is common sense, but since the 2016 election, there is a divide between those who believe race and gender are more important than class and vice versa. Often, detractors on both sides of the argument refuse to acknowledge that these categories are not separable and affect each other in complex ways. This is obviously of little consequence to Huerta. Her extensive work across marginalized communities results in a sharp instinct for what the biggest current social justice issues are; along with gender and race, Huerta sees economic inequality as one of the urgent problems to be tackled at the moment.

“I think that we made a lot of progress in the ’60s, which I call a cultural revolution, but if we look at where we are at in today’s world, where we have a lot of economic discrepancies,” she says, “we have a lot of very, very poor people and very, very wealthy people, and the middle class itself is shrinking because there’s been taxes on labor unions.”

Getting fair wages for farmworkers, women included, was just the beginning of the “gendering” of workers’ rights; sexual harassment has also been an issue Huerta has tackled in the farmworkers union, and beyond Huerta’s legacy, women are projected to be the majority of unions’ membership by 2025. But having a gendered approach to workers’ rights isn’t just good for women; Huerta explains that when tackling sexual harassment through education, progressive unions have expanded their educational thrust into a larger framework of language sensitivity in the workplace with regard to LGBTQ issues as well as gendered violence at work.

“The labor unions themselves have undertaken the job of talking to their members and educating their members about sexual harassment and not only that but also about turning to LGBTQ issues, too, so members will understand how to speak to people, how to use the pronouns of people, how they want to be addressed. So progressive labor unions have taken an additional step in that direction. And accountability, so that if somebody engages in this kind of behavior, they can be held accountable,” she explains.

But it seems like accountability and justice are faraway dreams at the moment; it took 80 women accusing Harvey Weinstein of sexual violence for his victims to see a semblance of justice, and President Donald Trump himself has been accused by dozens of women with impunity. Speaking out in favor of justice is increasingly a risk for activists as the political landscape becomes more and more polarized. In Ferguson, Missouri, six Black Lives Matter activists have died mysteriously while labor activists fighting for better working conditions at Amazon are in danger of being fired and smeared by the corporation. At a time of global neofascism — where we are led by men who have never been held accountable and activist burnout is extremely common — how can we keep the spirits up and keep speaking out?

“We might not win immediately,” Huerta says, “but if we just keep our eye on the prize, we will accomplish our goals and we will win. And the thing is not to give up! And have fun when you’re doing it if you can. Celebrate your victories.”

Huerta’s approach to activism is to take it day by day, victory by victory. Building a movement is the work of a lifetime; it takes time, commitment and hope. One of Huerta’s rallying cries, for example, is “The power is in your person,” which locates power in civic participation of individuals which, collectively, can form a movement.

“You don’t need to have a lot of money or a lot of influence if you can just be there in person, whether it’s for a march, for a protest, school board meeting, city council meeting, for voting,” she explains. “When we combine our person, our body with others, then that really creates a show of force.”

Huerta’s stamina at 90 years old is proof of the power of a single body, moving through communities to make a difference and consistently making meaning out of struggles that have historically been branded as divisive or unimportant on the left and on the right. By following her words, we can only hope to create as much change as she did — all you have to do is show up in your community.

Zora. Unapologetic. Ours. A Medium publication for women of color.