John Deranamie is a 50-year-old Liberian man whose dream led him to a meatpacking plant in South Dakota. He contracted COVID-19 as part of his job. 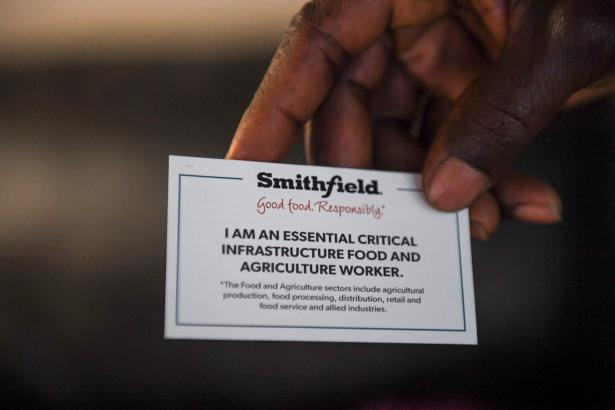 Danger was people dying in front of his eyes during the Liberian civil war nearly 30 years ago, and the hunger that gripped his family as he split a cup of rice between five people for a meal. It was the fear that pushed him to flee his home at 22 years old for a chance at a better life in America.

This time, it's the threat of the coronavirus, which killed at least two of his coworkers at the Smithfield Foods meatpacking plant in Sioux Falls. It’s the worry he felt when his locker mates coughed and bumped into his shoulder in the crowded locker room, and the desperation he felt while praying in his bedroom after learning he tested positive for COVID-19.

Danger is showing up to work in difficult surroundings while the rest of the world stays home. But Deranamie doesn’t have a choice.

He's one of 3,700 workers at the Smithfield Foods pork processing plant in Sioux Falls, where more than 800 employees have contracted the novel virus spreading across the world. But those employees are just a fraction of essential workers across the nation who are feeding America.

Deranamie understands the importance of his role in the food supply and keeping Americans fed. But he’s risking his life every time he steps into his uniform, he said.

Deranamie can smell his workplace from outside his front door.

He lives about two miles southeast of the plant, and when the wind changes just right the stench of dried pigs’ blood permeates Sioux Falls, which is South Dakota's largest city with a population of 180,000.

The smell doesn’t bother him. It’s the scent of his livelihood that lingers on his clothes for the past eight years.

Deranamie was driven to work by his family at the beginning of April – his last day at work and a week before the Virginia-based company announced it would close the Sioux Falls plant because of the coronavirus outbreak.

He opened the vehicle door and turned around to say goodbye to his family. One of his children recoiled at the smell wafting into the vehicle.

“You go to school and you learn,” Deranamie lectured before closing the door. "Then you won’t have to be at this stinky place like me.”

Sioux Falls wasn't Deranamie's first choice to live out his American dream. He moved to Minnesota when he was 26 years old but he struggled to find lasting employment for 18 years. He met his now-wife while he was living in St. Paul, and he was lured to Sioux Falls with the promise of a steady job, strong pay and ample benefits at the meatpacking plant.

“I hardly believed I would be able to get a job, pay my rent and support my babies,” he said. “I came and filled out an application, and I was lucky to get a job.”

Deranamie started out as a package worker, sorting product into boxes for $10 an hour. Now, he makes $18.20 an hour as a night-shift utility worker, filling in for various positions across the plant. The pay increase has helped support his growing family of eight children – six in Sioux Falls and two children from previous relationships. He’s able to support the family he left behind in Liberia as well.

Half of his Smithfield paycheck goes to his mother and siblings in Liberia, and to save money as part of his plan to return home one day to West Africa.

Deranamie rarely sees his children. He works 50 to 60 hours a week on the night-shift production line, coming home exhausted early in the morning.

He’s fast asleep by the time his children buzz through the house getting dressed for school.

The night shift starts at 4 p.m. nearly every day, just before they return from class. Typically, he parks his red 2008 Ford Explorer in a gravel lot across the street from the plant and walks into the building and the crush of the locker room, where he’s greeted by his locker mates as he changes into his uniform.

He changes his clothes, puts on an apron and his safety gear – a pair of glasses and a metal vest that prevents him from accidentally stabbing himself. Then he slips into his sleeves, pulls on his cut glove and slides into his steel-toed work boots. He wraps a beardnet around his ears and a hairnet on his head, and he places a white hardhat on before standing on the production line for the next eight to 10 hours.

Usually, Deranamie works as “drop head,” training the hog’s head in a group of four people as it passes through the production line so a USDA worker can inspect the product. It’s quick, heavy work.

As part of his utility role, he's been filling in as drop head for four years.

“Your shoulder, your back – everything hurts," said Deranamie. "But nobody else wants the job, so I do it. It’s not an easy job, but when you’ve been there for so long, it becomes easy.”

He’s been at Smithfield for so long, some of the tasks come naturally.

“When I go to work, I do the best I can because I’m getting paid, so I have to work accordingly,” he said. “I love working there. If I didn’t like working there, I wouldn’t be there for this long.”

It’s long and tiring work. But he keeps punching in for his shift every day, even once he started worrying for his safety as the coronavirus broke out at the plant.

‘You’re on your own’

Deranamie cried for hours after getting his COVID-19 results.

He’s only 50. He’s strong and healthy. But the week before he fell ill, a 51-year-old mother and teacher in Huron,  died nearly eight hours after presenting symptoms.

He kept going to work until he knew he was sick. He’s an essential worker so he had to show up, he said.

When he woke up on April 7, he felt sore – or more sore than usual. He didn’t show a fever when his temperature was taken before entering the plant, but he insisted he was ill. It wasn’t until he spoke to HR, informing them about his symptoms that they instructed him to go home and get tested.

Since the first case in the plant was announced on March 25, he knew that he’d get sick because of cramped working conditions at the meatpacking plant. It was just a matter of time, he said.

“I got friends that were sneezing and coughing and grabbing their chest at work,” he said. “There was nowhere safe. Even if you avoided the cafeteria, you can’t avoid people on the line.”

He locked himself in the master bedroom of his family's apartment for the next two weeks, surviving off Liberian fufu and spicy soup his wife left outside his door. While his wife and children surrounded the dinner table most evenings, she would call Deranamie on the phone, allowing him to be as much a part of his children’s lives as he could at that moment.

“I’m not so scared of dying, but who is going to take care of my family?” he recalled asking and praying.

His wife slept on the living room couch for the two-week period, and she slept on the couch a few more days after he was cleared by the South Dakota Department of Health. No other family members tested positive for COVID-19, and Deranamie calls that a blessing.

But when his self-quarantine ended, the question of when he’d return to work weighed on his mind. He needed to return. His wife also worked at Smithfield, but her income alone wouldn’t cover their expenses.

But how would Smithfield keep them safe from spreading the coronavirus to their children? He might have tested positive for COVID-19, but he worries that he can catch it again.

Deranamie returned to work on May 4 for a safety meeting, nearly a month after catching the coronavirus inside the facility. He and his coworkers were instructed on new procedures at the plant and how to wear provided face shields and masks.

He saw that Smithfield installed Plexiglas barriers between production-line stations about 6 feet apart in most areas – recommendations set by the Centers for Disease Control and Prevention during the agency’s visit to the plant in mid-April. The locker room will be capped at 50 people, he said, so it won't be as crowded. The temperature tent still stands outside the building's entrance.

Despite the precautions taken, Deranamie is still concerned about returning to the plant.

Deranamie’s wife and children will get tested this week before he officially returns to work. He's scheduled to return to the production line May 11. But he's already requested vacation time starting May 18 to escape the plant and its risks.

He planned to return to Liberia for a month this summer to visit family but now plans to use that vacation to stay at home. He’s teaching his 5-year-old to ride a bicycle and wants to catch up on family time that he has missed.

Ultimately, he'll return to the processing line, like thousands of other essential workers, risking his personal well-being to support the nation’s food supply – and that of his own family.

“I’m doing it because I need to support them,” he said.