Palestinian President Abbas Declares End to Agreements with Israel, US

Faced with the looming threat of Israeli annexation, on Tuesday Palestinian President Mahmoud Abbas declared an end to all Palestinian agreements with Israel and the US. Analysts, however, are skeptical Abbas will follow through on his pledge. 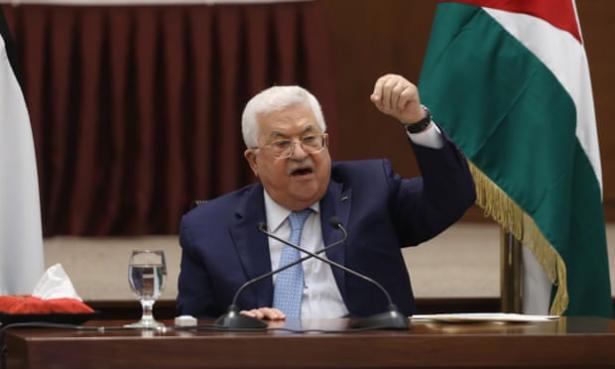 On May 19, Palestinian President Mahmoud Abbas denounced the Trump Administration as “fully responsible for the oppression befalling the Palestinian people.” , Alaa Badarneh/EPA

Palestinian President Mahmoud Abbas declared late Tuesday night an end to “all agreements and understandings” with Israel and the United States, and that his government would be “handing over responsibility of the occupied territories back to Israel.”

In an emergency meeting with Palestinian leadership, Abbas said: “the Palestine Liberation Organization and the State of Palestine are absolved, as of today of all the agreements and understandings with the American and Israeli governments and of all the obligations based on these understandings and agreements, including the security ones.”

He went on to say that as an occupying power, Israel should “shoulder all the responsibilities and obligations” of  “protecting the civilian population and their property” in accordance with international humanitarian law and the Fourth Geneva Convention.

While Abbas’ statements have made the front page of Israeli, Palestinian, and international news websites, one major question remains: will this time be any different?

Tuesday’s declaration comes after years of empty threats by the leader of the Palestinian Authority (PA) to end agreements with Israel in protest of its policies in the occupied territories.

Just last year, Abbas claimed he ended security coordination with Israel over its demolition campaign in Sur Bahir, though no changes to the controversial policy were made in reality following his announcement.

Security coordination with Israel has been a point of contention within Palestinian society for years, mostly due to the role the policy plays in Israel arrest raids inside PA-controlled territory in the West Bank.

But security coordination affects much more than Israeli arrest raids. Even the most mundane things, like movement of Palestinian officials e between Israeli-controlled areas of the West Bank must be coordinated in advance with local authorities.

For example, when Abbas wants to leave his presidential palace in Ramallah to meet foreign diplomats in Bethlehem, his security must coordinate his passage with Israeli authorities in order to travel smoothly through a number of Israeli military checkpoints along the way.

The end of the Palestinian Authority?

Another major question surrounds the status of the Oslo Accords. If, in Abbas’ words, the Oslo agreement has been nullified, in reality, it would mean dissolving the Palestinian Authority and all its institutions, which were born out of the accords.

The likelihood of the PA to willingly break down its government, forfeit its power, and lay off the thousands of people who rely on government jobs, is next to impossible.

“The reaction has largely been the same, whether on the Palestinian street or in diplomatic circles,” Dawoud Yousef, a political analyst formerly based in Ramallah told Mondoweiss. “It’s largely a collective sigh.”

“Not even the most diehard Abbas loyalists can think that this declaration has any consequence 17 years into a 5 year agreement,” Yousef said, referring to the Oslo Accords, which were meant to serve as an interim agreement pending a final solution to the conflict.

At the end of the day, the PA is more concerned with “the maintenance of control than any liberatory pursuit,” Yousef said, adding that “if the suffering and destruction of your own people isn’t enough to end your subservience to the occupier, I am not sure what is.”

Abbas’ words are not only meaningless to most Palestinians and diplomats, Yousef noted, but to Israel as well. When asked if he believe Abbas’ declaration would have any effect on Israel’s annexation plans, Yousef said “Israel has never bent to Palestinian political pressure.”

“One thing should be clear at this juncture: the diplomatic path, which has been the cornerstone of Abbas’ vision and legacy, has been a spectacular failure,” Yousef continued. “How is one to pursue a diplomatic path with an entity whose core strategic goal is the negation of your existence?”

“If the PA really cared about liberation instead of its own privilege, it would have dissolved itself under Arafat. Realistically, one cannot end an agreement that has already expired or been disregarded by one of the parties.”

[Yumna Patel is the Palestine correspondent for Mondoweiss.]

For the Palestinian News & Information Agency's (WAFA) unofficial translation of President Abbas' May 19 speech read President Abbas declares end to agreements with Israel, US; turns over responsibility on occupied lands to Israel.