The End of START and Why The U.S. Can’t “Win” an Arms Race With Russia and China

Trump’s childish nuclear gambling and obsessive jingoism have combined in a strategy that could end arms control as we know it. Trump is seeking to end the Obama-era nuclear arms treaty with Russia, and for election purposes, blame it on the Chinese. 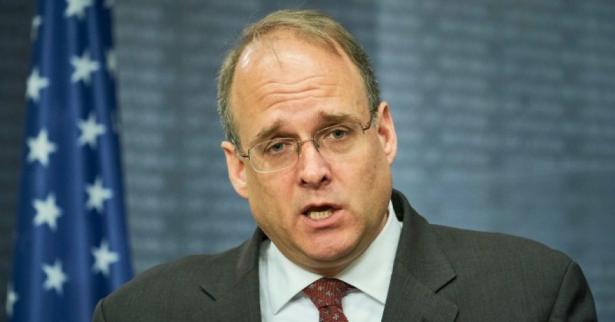 Marshall Billingslea, Trump’s Envoy for Arms Control. In the heart of a horrible pandemic and a huge recession he pledges to spend Russia and China “into oblivion” to win a new nuclear arms race., Valsts Kanceleja/ Latvia State Chancellery

The president who told the American people that “trade wars are good, and easy to win” now appears equally confident about “winning” a nuclear arms race. Last week, Donald Trump made a half-baked, ill-adviseddecision to pull the United States out of its Open Skies Treaty with Russia; now, his administration is signaling plans to blow up the last major security accord standing, the 2010 Strategic Arms Reduction Treaty, or New START, with Russia, and thus open the door to an arms race.

In a streaming Q&A with the Hudson Institute last week, Marshall Billingslea, Trump’s arms-control envoy, conceded that major-power nuclear accords were vital to human security, but he added that if New START fell apart, everything would be fine. “The president’s made clear that we have a tried-and-true practice here,” Billingslea said. “We know how to win these [arms] races. And we know how to spend the adversary into oblivion.”

In a little over seven months, New START is set to expire, and the Trump administration is threatening to disregard the agreement’s five-year extension provision—a no-brainer renewal that would be routinely approved under a normal administration—unless China joins the talks and Russia makes additional concessions. If Washington blocks New START’s extension, then as of February 5, 2021, the nuclear arsenals of the U.S. and Russia will be without legal limits for the first time in decades. In that world, the treaty’s verification measures—the sort that allowed American inspectors to see Russia’s fancy new hypersonic boost-gliding intercontinental ballistic missile warhead up close, for instance—would evaporate.

Russian President Vladimir Putin has already offered to extend the treaty without preconditions, but skeptics in the administration see Putin’s eagerness on the matter as weakness, interpreting it as evidence that their hard-line stance is working to raise anxieties in Moscow. If the U.S. is willing to let New START collapse, the onus remains on Washington to show what will come after it. But just as there was no Trump plan to actually “win” a trade war with China, there isn’t any plan for guaranteeing American security in a new post-treaty arms race.

Billingslea’s casual suggestion that the U.S. knows “how to win” an arms race is wrongheaded but common enough: Despite the Soviet Union’s demise, neither Washington nor Moscow “won” the Cold War–era arms race. Instead, to manage the costs of unconstrained nuclear competition—and to reduce the risks of an undesired nuclear war—the two parties saw fit to discuss mutual limitations and sign multiple treaties. The “victory,” such as it was, actually culminated with New START’s predecessor agreements.

But more troublingly, Billingslea’s assertion that the U.S. “know[s] how to spend the adversary into oblivion” seems slightly deranged in the middle of a once-in-a-century global pandemic that’s caused the highest U.S. unemployment rate since the Great Depression, which lawmakers have tried to slow with $3 trillion in economic relief, with trillions more likely needed.

Of course, Billingslea knows a thing or two about spending into oblivion. After starting his career as a defense adviser to the late Senator Jesse Helms, Billingslea worked in the Pentagon during the George W. Bush administration, helping to spend an estimated $6.4 trillion on post-9/11 overseas wars that have killed 800,000 people worldwide and displaced 21 million. (His arms-control duties for Trump are a consolation prize, granted to him after his nomination to the State Department’s top human rights post stalled out over his role in Bush-era torture of detainees.) If spending without results is what’s being promised, Billingslea might have a case.

Even if the U.S. weren’t facing a second Depression and suffering from epochal deficit expansion following Trump’s 2018 tax cuts, as an unelected presidential envoy, Billingslea simply has no standing to argue that the U.S. will spend lavishly on nuclear weapons “if we have to”—that is, if he fails at his primary job, negotiating. Those fiscal priorities are up to Congress, which has spent heavily on defense in recent years only to pull back from an increasingly contentious Middle East, fight to a stalemate in Afghanistan, and suffer corruption and civil unrest at home. Nuclear arsenal notwithstanding, the U.S. is looking more like the late-stage Soviet Union than an unconstrained hegemon.

There’s a tragic irony in the White House bracing for an arms race to prove it’s serious about getting China to the arms-control table. China, like all nuclear weapons states, should take steps to reduce its counts, but the Beijing nuclear arsenal amounts to about 5 percent of America’s atomic arms stockpile: By one estimate, France holds more nuclear warheads than China. Even if you take at face value the Defense Intelligence Agency assessment that China will look to double its arsenal in the years ahead, its total stockpile of warheads would still be well below half the limits that New START places on Russian and American warheads. (Beijing’s deployed warhead counts would be far lower yet, possibly in the low double-digits; the U.S. can deploy that many warheads on just one or two of its 14 ballistic-missile submarines.)

Nor has China’s essential nuclear posture—relying on a small number of dispersed nuclear weapons for deterrence-by-punishment—changed since the 1960s. Though a debate exists within China on the appropriate size of its own nuclear arsenal, those at the levers of nuclear policy have seen fit to maintain the country’s comparatively modest deterrence posture. As much as American national security culture obsesses over nuclear inferiority, there’s simply not much enthusiasm in Beijing to outpace the U.S. here in any meaningful way.

The Trump administration’s theory of why arms-racing might be desirable remains inchoate at best and delusional at worst. One explanation is that it flows from the basic hegemonic militarism that has defined the White House’s choices on defense policy. In his days as a candidate, Trump moaned that the American “nuclear is old and tired,” while Russia’s was “tippy top, from what I hear.”

In fairness, the administration’s stated focus on multilateralizing arms control with Russia and China isn’t a bad one. At some point, China will have to come to the table. But holding New START hostage to Beijing’s participation—a nonstarter in the short time remaining before the treaty’s lapse—suggests an entire lack of good faith in the White House.

Negotiating in good faith requires seriously hearing out what the other side would want out of an exchange; today, there’s not much to go on, since the U.S. and China haven’t held official talks on “strategic stability” in years. The administration could, of course, propose such exploratory talks with Beijing while moving ahead with New START’s five-year extension to preserve the status quo with Russia. Instead, what we’re left with is bad faith: a desire to show that an attempt was made to bring China in, but Beijing demurred, and so New START had to die.

If you want a more secure, stable world, that’s not a great strategy. But if you’re looking to goose American exceptionalism by whipping citizens into a Sinophobic froth at a time when America looks more and more like other disappointingly dissembling regimes, you could do worse. “If China wants to be a great power, and we know it has that self-image, it needs to behave like one,” Billingslea said, without any hint of irony. This sort of unilateral, I’m-the-grown-up-here dictating of terms hasn’t worked for the U.S. with Iran or North Korea: It certainly won’t work with China or Russia. To be interested in what works, however, the Trump administration would need a certain pragmatism about statecraft that has been absent from day one. What remains is oblivion, and how much treasure this White House is willing to expend in bringing it a little closer.

[Ankit Panda is an adjunct senior fellow at the Federation of American Scientists and a senior editor at The Diplomat. Follow him on Twitter at @nktpnd.]