tv The Half-True Story of Catherine the Great

The Great shares a broadly similar style and subject with The Favorite, though it is neither as dark nor as committed to factual accuracy. The series shows the grotesque royal court life of Empress Catherine II of Russia, aka Catherine the Great. 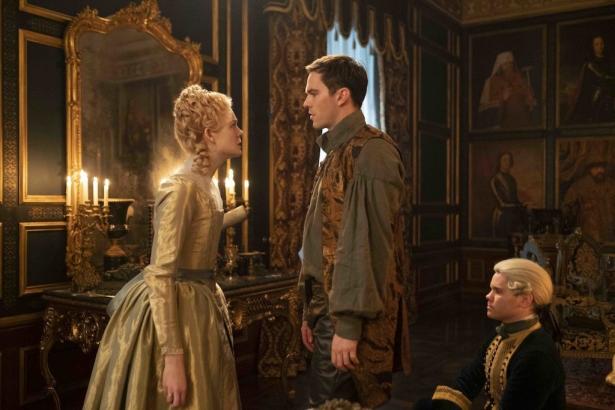 A scene from Hulu's The Great miniseries.,

I love The Great. This new ten-part Hulu series was written by Tony McNamara, the screenwriter who gave us the excellent film The Favorite, directed by Yorgos Lanthimos. A darkly hilarious “period comedy,” The Favorite showed the grotesque eighteenth-century court life of a late-age Queen Anne of England. Ailing and incompetent, she was vulnerable to her ruthlessly ambitious “favorites,” each vying to be the power behind the throne. A surprisingly factual account of the court, The Favorite’s depictions of cruelty, decadence, and vice turned the pious genre of aristocracy-worshipping “heritage films” and TV shows — Downtown Abbey, The Crown, and The Young Victoria — on its head.

The Great shares a broadly similar style and subject with The Favorite, though it is neither as dark nor as committed to factual accuracy. The series shows the grotesque royal court life of Empress Catherine II of Russia, aka Catherine the Great (played by a terrific Elle Fanning), whose marriage to Emperor Peter III is necessarily truncated when she deposes him and takes his throne. Peter is played by Nicholas Hoult (also in The Favorite) who gives a sublime performance, dominating every scene he’s in.

A gorgeous, sunny-looking show dominated by glowing yellows and greens, Catherine’s signature colors as she gathers power, The Great is manifestly McNamara’s work. As in The Favorite, irreverent “chapter titles” announce the major sequences. The Favorite gave us “This Mud Stinks” and “What an Outfit”; The Great features episode titles such as “And You, Sir, Are No Peter the Great,” “War and Vomit,” and “Meatballs at the Dacha.”

Too often, period pieces are characterized by slavish attempts at historical accuracy, which merely distract without being enlightening. In The Great, a riotous interpretive mode brings us into the mad heart of history. McNamara’s wizardry for using fresh anachronisms and fantastical touches convey the bizarre aspects of an unfamiliar historical world.

Often, what you assume is fiction in the show, did in fact happen. For example, in the shockingly topical Episode 7: “A Pox on Hope,” Catherine demonstrates her superior education and judgment in advocating for the experimental use of a vaccine to combat a smallpox outbreak, which she uses herself to demonstrate its efficacy to the horrified and grossed-out court. It turns out Catherine the Great actually did advocate for the vaccine and dosed herself.

And then there’s McNamara’s sophisticated skill in revealing how characters develop and new facets emerge under immense pressure. Just when Peter’s stupid behavior seems absolutely set and irredeemable, for example, we’re hit with his immense charm, or his admirable bravery. There’s a tremendous scene in Episode 8, “Love Hurts,” involving an unexpected attempt to assassinate Peter — by someone other than Catherine. Clamoring to defend the Emperor, seemingly jaded court revelers are suddenly revealed to be ferocious and physically fearless. An emotionally messy menage-a-trois made up of Peter, Peter’s best friend Grigor (Gwilym Lee) and Peter’s best friend’s wife and also Peter’s mistress Georgina (Charity Wakefield) all leap into the fray to murder the would-be assassin, while Catherine stands dumbfounded.

Uneasily contemplating her own assassination plans, Catherine wonders aloud how they’re all so capable of fighting on a moment’s notice while her own reflexes are paralyzed, and the answer is simple: “You’re not Russian.”

And indeed, the real Catherine — originally Prussian — had to work assiduously to make herself seem as Russian as possible in order to gain acceptance in her new role, though she focused on language fluency, religious conversion, and other more conventional approaches. The Great gets certain basic facts right before taking off like a rocket into glorious, insightful invention.

Catherine really was an impoverished Prussian princess of high ideals, eager intellectual pursuits, and lofty Enlightenment ambitions who got married off to the hapless Peter III—though he was actually not handsome, not brave, and not charming in any way. Six months into his disastrous reign, Catherine took his throne from him so efficiently it astonished the world. As Frederick the Great of Prussia sneered, Peter “allowed himself to be dethroned like a child being sent to bed.”

Here’s a funny historical detail that illustrates how McNamara’s uproarious approach to history is a good one: the real Peter III died in mysterious circumstances a few months after the coup, supposedly of “’hemorrhoidal colic’—an ‘absurd diagnosis’ that soon became a popular euphemism for assassination.”

It’s worth noting that the real Catherine had to wait many weary years before her husband’s aunt, Empress Elizabeth III, died, thus allowing Peter III his brief reign. Unlike the fresh young ingenue that is Catherine in The Great, the Empress was actually thirty-three in 1762 when she kicked Peter to the curb and took over, and she’d had a lot of time to size up the situation. The series dispenses with Elizabeth’s reign altogether, transforming her into the lovably daffy court character Aunt Elizabeth (Belinda Bromilow) who trains butterflies as pets and uses “madness” as both a refuge and a ploy to stave off the machinations of court intriguers.

Catherine’s remarkable ability to seize and wield power gave rise to vicious smears about her sexuality as a way of diminishing her achievements and attempting to undermine her authority. The most famous of these concerns her supposedly wild promiscuity, so insatiable that her death was rumored to have been caused by her attempt to have intercourse with a horse. This lurid tale has it that, in mounting her, Catherine’s stallion swain dropped its full weight, crushing her to death. It never happened, of course—Catherine died of a stroke in her royal bed at age sixty-seven, having ruled for thirty-four years.

Tales of Catherine’s wild promiscuity are easily countered with a little research. A surprisingly thorough historical record on the subject tells us she had twelve lovers over the course of a lifetime, most of whom she kept as friends who were generously pensioned off with nice estates.

The series engages in a tamer narrative of Catherine’s promiscuous reputation. In the show, it’s viperish court ladies who start the rumor about Catherine’s equine lover, and until she learns how to command respect, subversive neighs follow her down every grand hallway in court. Plus an adorable note is struck when Peter hears the rumor and doesn’t mind: “That’s fucking, and I approve of fucking!”

Though McNamara deplores the way Catherine’s life and accomplishments have been “reduced to a salacious headline about having sex with a horse,” we must admit, the smear remains well-known because we love it. Imagine the feverish and cowed imaginations that conjured it up! The lies about Catherine’s epic sexuality attest to her daunting power make her live on in people’s imaginations better than any list of her accomplishments could.

The best film portrayals of Catherine show her as a figure of marvelous excess, too much for the room, the palace, the nation, the world!  They feature stars playing Catherine who were known for their glamorous bisexuality and fearless, carnal freedom: Tallulah Bankhead in Ernst Lubitsch and Otto Preminger’s co-directed camp classic A Royal Scandal, (1945) and, best of all, Marlene Dietrich in Josef von Sternberg’s magnificent erotomaniac fever dream, The Scarlet Empress (1934).  In a mink-hatted regimental-themed outfit, Dietrich’s Catherine greets her troops with an arched eyebrow and a familiar “Hello, boys,” suggesting she’s enjoyed sex with every single one of them and rules through sexual dominance.

The Great is milder than those classics because it deals only with young Catherine’s early trials by fire that take her to power. The first two episodes are a little slow-moving because as yet she’s an idealistic Prussian naïf out of her depth in the Russian court, so not yet a worthy opponent for her pretty but hopelessly addled narcissist of a husband, Peter. By the third episode, she is gathering the savvy to take him on and a host of other rivals for power, including the religious freak Archie the Archbishop (Adam Godley) and the gross drunkard General Velementov (Douglas Hodge). All the while, she is building tricky alliances with wary bureaucrat Orlo (Sacha Dhawan) and ex-lady of the court who is now her embittered servant Marial (Phoebe Fox).

The love story with Leo Voronsky (Sebastian de Souza) is my least favorite part of the series. It starts well when Peter, sick of seeing unhappy Catherine casting a pall on everyone else’s raucously good time at court, assigns Leo to be her lover. Leo’s way of handling life in the white heat of proximity to power is to resign himself to fate and try to enjoy every moment. This is great for loosening up Catherine, but as their love become more intense and serious, it has nowhere to go but…well, shall I spoil it for you? I’ll give you a hint — if you haven’t seen any old 1950s movie about a woman with a high-powered career, guess what she has to sacrifice to keep it? Yeah, it’s that plotline. And that’s a shame, because in this area, the real Catherine the Great was tougher and more resourceful, and she managed her romantic life very well, thanks.

But what’s a minor flaw among so much that is glorious? I only wish there could be a ten more great seasons of The Great, which thus far isn’t even confirmed for a second season. Let’s all watch and make it happen!

Our spring issue, “Pandemic Politics,” is out now. It features over 120 pages of beautiful illustrations and quality writing and analysis.

Get a discounted subscription today!