The Fire This Time

These protests are too widespread to go away. There will be no peace without justice on multiple fronts. 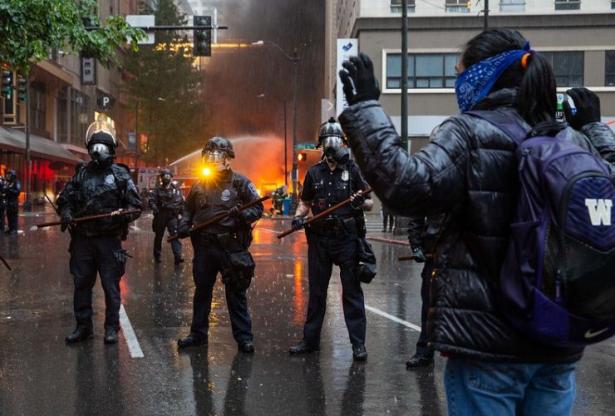 Protesters and police in Seattle, Washington, on May 30, 2020., Flickr / Kelly Kline

At the end of May streets once emptied by COVID-19 have filled with protesters in over 700 U.S. cities and towns. They demand justice in the wake of a new wave of state-sanctioned violence against black people—in particular the brutal murders of George Floyd, Breonna Taylor, Tony McDade, and Ahmaud Arbery—that recall with sickening familiarity the police murders of Eric Garner, Aiyana Stanley-Jones, and so many other black Americans. They were mothers, fathers, daughters and sons, leaving behind grieving friends and family members and a collective sense of outrage. The Trump administration’s ineffectual, race-baiting, and militaristic response to the uprising has only served to heighten the crisis.

Emotions are raw in a nation already mourning a COVID-19 death toll of more than 108,000. The disease has disproportionately taken black and brown lives and pushed low-wage people further into the margins where so many are facing an uncertain economic future. People have taken to the streets to vent their anger and demand systemic change. Black Lives Matter, Justice for George, Say Her Name, and I Can’t Breathe have become global rallying cries as protest has spread to Europe, Africa, and South America.

Racism doesn’t look only like a knee on the neck. The fires burning on U.S. streets are symbolic of fires that have smoldered for some time. The foundation of racial capitalism produces and reproduces vast racial disparities in wealth, income, job opportunities, education, and health care. Indeed the wealth of the United States was built on a long history of looting the land, labor, and lives of racialized peoples. Many of the most prestigious institutions of higher education where we were trained profited from their involvement in the system of slavery and the continued exploitation of black labor in the years after the end of the Civil War.

Black people who were able to gain an economic foothold faced violence and looting. During the Tulsa Race Massacre of 1921, white mobs attacked one of the most prosperous African American communities in the nation. Over several days the vicious attack on this black community—known as the Black Wall Street—left 300 people dead, and businesses looted and destroyed, yet it has been excised from U.S. history. Colonialism and imperialism from Hawaii to Puerto Rico and beyond has generated enormous wealth for the United States, often at the expense of black, indigenous, and other people of color. Immigrant workers, from migrants on farms to employees of meat processing plants toiling in unsafe and exploitative conditions, are criminalized and debased as intruders while simultaneously deemed essential to the U.S. food chain and economy and exploited for their labor. This history of dispossession persists through predatory lending, payday loans, municipal fines and forfeits, and institutionalized disparities in wages and benefits—and it has often been supported by state-sanctioned violence.

Enraged by police executions of unarmed black people—on top of what Ruth Wilson Gilmore calls the “organized abandonment” of black communities—protesters have in some cases engaged in direct action, disruption, and disorder. That said, the majority of protests have been peaceful despite provocation and violence from the police. Much like the civil rights movement, the violence in today’s movement has come largely from the state; over a hundred incidents of police attacks on journalists and countless other episodes of brutality have been recorded since the start of the protests. The police chief in Louisville was fired after officers involved in the fatal shooting of a black business owner had not activated their body cameras, and six officers in Atlanta have been charged after the televised taser attack on two black college students.

In the past, urban rebellions served as important seedbeds for raised consciousness and political organization. Members of the Oakland Black Panthers worked tirelessly to channel anger into organization. Prominent members of organizations like the League of Revolutionary Black workers in Detroit had taken part in the Detroit Uprising in 1967. Welfare rights activists demanding state assistance organized disruptive demonstrations targeting welfare offices. The current protests have targeted businesses and property, not innocent bystanders, unlike the New York City Draft riots of 1863 or the Tulsa Riot of 1921, in which hundreds of black people were murdered.

White supremacist organizations and agent provocateurs have also attempted to sow strife and make the mobilization against police violence seem chaotic and destructive, obscuring the political content that is at the core of the protests. Simultaneously, the “outside agitator” narrative has been weaponized by politicians to fuel harsh and militaristic crackdowns on sincere dissent. The news media’s disproportionate coverage of fires, theft, and vandalism, at the expense of more systematic analysis of the root causes, has opened the door for President Trump to insist that he is the friend to all peaceful protesters, while berating governors nationwide for their weakness, demanding arrests and domination, and threatening to turn the military against citizens and residents. The phrase “law and order” is a racist dog whistle used to appeal to conservatives and liberals who might decry police violence, but who ultimately support “tough” policing and believe current problems can be addressed through piecemeal reforms.

But COVID-19 makes a return to “normal” impossible and presents an opportunity for imagining a new world. Indeed a transformative vision has the potential to erupt from the ashes. Longstanding local organizations and community activists are calling for political accountability, structural transformation, prison abolition, democratic engagement, and social investment. In this moment of crisis people are coming together across difference, building and rebuilding, protecting each other and finding mutual goals. Recently, in Washington, D.C., dozens of protesters found overnight shelter in the home of a stranger who protected them from arrest. While some black women mayors have emerged as keepers of law and order, black women and feminist activists on the ground are exercising a different kind of leadership. Their leadership is horizontal, collaborative, group-centered, decentralized, and does not rely on a singular figure or a centralized authority. The Movement for Black Lives, for example, organized a nationwide call on to forge abolitionist strategy during a week of action as part of the people of color–led Rising Majority coalition.

As the COVID-19 crisis opened a wedge for unprecedented political possibility, the changes it imposed have also pushed longstanding goals of the left into the mainstream. Decarceration has unprecedented traction as jails reduced their detained populations, in humanitarian releases—demonstrating, in effect, that many people in jails did not need to be there in the first place. Domestic violence and homelessness, likewise, gained new visibility as stay-at-home orders highlighted the precarity of those who could not shelter in place safely. Essential workers, the elderly, people without resources, black, indigenous, and other people of color have been COVID-19’s greatest victims, setting in sharp relief the glaring economic disparities in the United States. While they have been forgotten by policy makers, they have gained greater visibility. They have organized work stoppages in Amazon warehouses and hospitals and created mutual aid networks. They have gained support beyond daily 7 p.m. clanging of pots and pans, a sound which has been drowned out by protest and demands for even more far-reaching reforms.

Thousands of people have taken to the streets to reopen the United States in ways that seemed unimaginable just one week ago. And as protests spread globally, it echoes a rich history of both international support for the black liberation movement as well as the black freedom movement’s support for national liberation struggles all over throughout the world.

These protests are too widespread to simply go away. Protesters have made it clear that there will be no peace without justice on a multiple of terrains: from prisons, to voting rights, policing, extreme inequality and corporate greed, excesses of U.S. foreign policy, intimate partner violence, environment, and health care. The uprisings have pushed us further from the notion of a “return to normal.” What are the possibilities for a more just future?