Juneteenth Is a Reminder That Freedom Wasn’t Just Handed Over

I’ve celebrated this holiday all my life. It’s different this year. 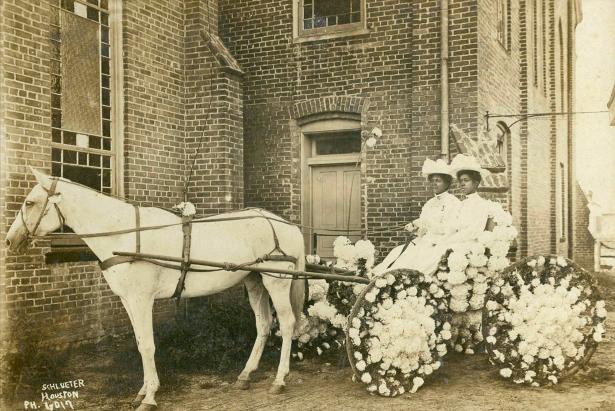 A1908 photograph of two women in Texas sitting in a buggy decorated with flowers for the annual Juneteenth Celebration parked in front of Antioch Baptist Church located in Houston’s Fourth Ward., Houston Public Library, African American Library at the Gregory School.

For me, celebrating Juneteenth was like planning a birthday party or hosting a family reunion. My father organized the first Juneteenth gathering in Grand Prairie, Texas, in 1987 and continued his efforts throughout my childhood, implanting me in the process. Weeks before the holiday, my family and our friends would draft itineraries and search for soul food caterers, trying to create an environment different from the previous year’s, to keep people excited about attending, on a tight budget. Some years there were multiple music performances and expensive activities. Other years there were contests with no monetary prize, but every year, no matter how much funding was provided, two themes remained true: community and Texas pride.

On June 19, 1865, two and a half years after President Abraham Lincoln’s Emancipation Proclamation, Union soldiers arrived in Texas to report that the Confederacy had surrendered two months earlier and that enslaved people were now free. Texas was the last state to receive the news. In celebration of the long overdue ending of slavery, black Texans come together every year to remember our ancestors and the harsh treatment they endured for centuries. In a red state where white-supremacy groups still congregate and Confederate flags fly from the back of trucks, it’s an indication that we are just as Texan as anyone else and our culture has influence in a place that once delayed our emancipation. Juneteenth is a reminder that our freedom was fought for and not just handed over to us. It’s the blueprint for the hundreds of movements that followed to further guarantee that freedom was achieved.

And in 2020, during a national outcry for justice, awareness of Juneteenth seems at an all-time high: An increasing number of companies, including Vox Media, Twitter and Square, will now observe June 19 as a permanent company holiday. The day also feels more timely and relevant than ever, a reminder that freedom is still long overdue.

The morning of Juneteenth always began with a parade. Dance teams, high school bands and church groups would showcase their talents while small businesses and local recreation centers drove floats to show their support for the black community. If I wasn’t marching along with friends, I’d catch a ride on the back of my grandfather’s pickup truck and sit next to my dad. Prince would blast from the speakers while dancing pedestrians followed behind the car. Several people would yell “Thank you” to my father, and I could see that he was proud of his work, and even more proud of the kinship present in his own neighborhood.

The 30-minute route would lead us to the park, where bounce houses, horseback riding, basketball courts and a swimming pool waited for the children. The adults and elders would congregate around the stage or browse through the vendors, debating what makes someone a true Christian and spreading neighborhood gossip. At 2 p.m., lunch was served, led by a grace, carried by guest speakers and concluded with tons of hugs and kisses from people who somehow were related to you. By the evening, parents would trickle off while the older kids would hunt fireflies or listen to the elders tell stories of how much the neighborhood had changed since they were children. And by night, families headed home or to the lake to pop fireworks.

The entire celebration lasted only six hours but had the vitality to keep you feeling warm and loved throughout the summer. It acted as a reminder that there was a community of people who were rooting for you, supported you and wanted to see you succeed. Every time you left a Juneteenth celebration, you took with you new stories, new connections and a new sense of what it meant to be black, but specifically what it meant to be black in Texas.

As I watch predominantly white brands post their Black Lives Matter statements and sift through my emails from editors who finally are interested in my opinion, I remember everything I was told and overheard during Juneteeneth celebrations. “Never shop where you won’t get hired” and “Don’t let anyone tell you that you can’t do something” ring deep in my ears as I navigate embedding myself into this movement. I am reminded of history lessons and uncomfortable conversations regarding systemic racism that I heard not in a classroom but instead from speakers on Juneteenth.

Attending a Juneteenth celebration was freeing: I had the freedom to wear my hair however I wanted without judgment, to dress however I wanted without comments and to express myself without microaggressions. All of these freedoms granted to me as a child have molded me into the proud black woman I am now. It’s the one day each year that I’ve been able to exist, unapologetically and unproblematically, in a space surrounded by people who have my growth in their best interest.

In response to the recent killings of Ahmaud Arbery, Breonna Taylor and George Floyd, protests and advocacy online and on the ground have spread worldwide. From a nationwide plea for justice to the cancellation of “Cops,” and now the observance of a holiday celebrating emancipation, our asks are finally being answered. And the importance of Juneteenth is finally receiving widespread recognition. It’s also likely that this movement will lose its momentum as businesses begin to reopen and “normal life” makes its return. Whatever might come, I know where I’ll be on Friday: celebrating the continued fight that the brave and relentless people before me expect for my generation to carry on.

Brianna Holt is a culture writer and editor in New York City.