The killings during the 12-year period adds to the 4,400 victims from the post-Reconstruction era of 1877 to 1950, bringing the total number of people lynched to 6,500 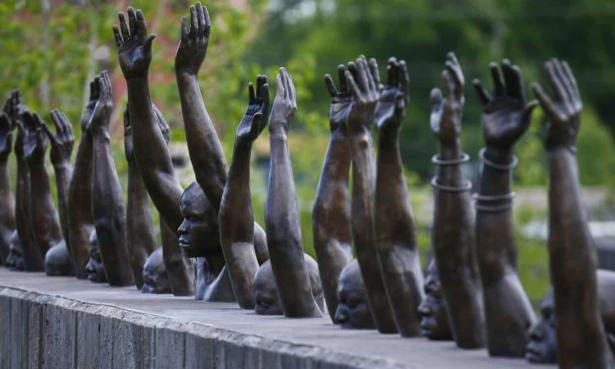 A bronze statue called ‘Raise Up’, part of the display at the National Memorial for Peace and Justice, a memorial to honor thousands of people killed in lynchings, in Montgomery, Alabama, Brynn Anderson/AP

When George King, a black man in South Carolina, was freed from slavery by the 13th amendment to the US constitution in 1865, his former slave owner came to him to clarify how things were going to work from now on.

The true horror of those words, and the blast of racial terrorism such sentiments ignited across the deep south in the immediate aftermath of the civil war, are laid bare in a harrowing new report by the Equal Justice Initiative (EJI).

The report, Reconstruction in America, documents more than 2,000 black victims of racial terror lynchings killed between the end of the civil war in 1865 and the collapse of federal efforts to protect the lives and voting rights of black Americans in 1876. 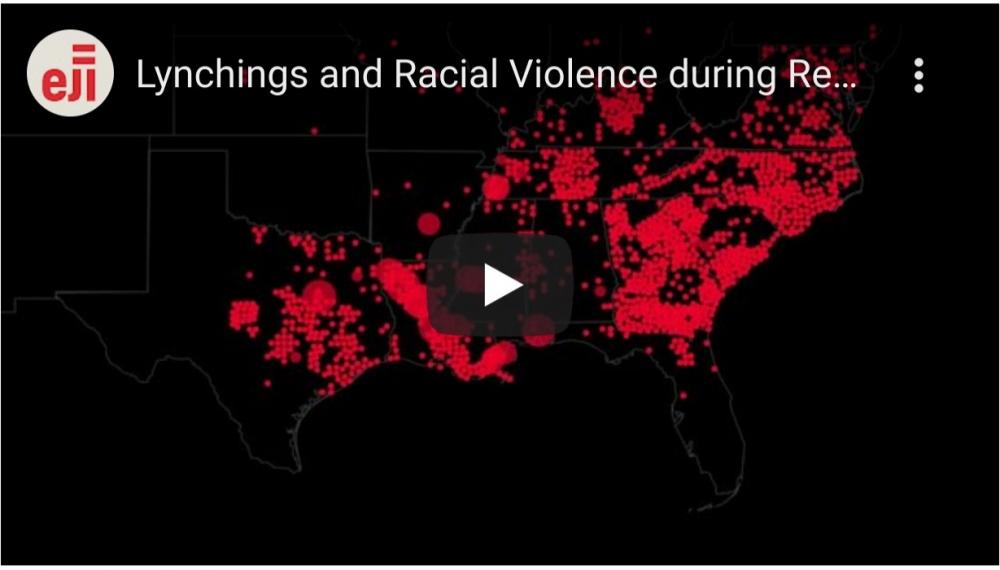 In that brief 12-year period, known as Reconstruction, a reign of terror was unleashed by Confederate veterans and former slave owners in a brazen effort to keep black people enslaved in all but name. Technically freed slaves were lynched at an average rate of almost one every two days – putting paid to the hope that Emancipation offered millions of black people and effectively terrorizing them into submission.

The report is a prequel to EJI’s groundbreaking 2015 research that identified and recorded more than 4,400 black victims of racial terror lynchings from the post-Reconstruction period, 1877 to 1950. The new report allows that grim tally to be further expanded with the addition of the 2,000 documented victims from the Reconstruction era itself – bringing the total number of documented cases of black people who were supposedly free yet were lynched in the most sadistic fashion to a staggering 6,500 men, women and children.

EJI notes that its newly revised toll of racial terror lynchings in America is likely to underestimate the total by hundreds or even thousands given gross underreporting of racial violence and widespread efforts to suppress the truth.

Bryan Stevenson, EJI’s executive director, told the Guardian that the new report highlights the capitulation and complicity of American institutions – from local sheriffs right up to the US supreme court in Washington – in the face of white supremacist violence. “It’s one of the few times in American history where there is an almost complete concession to lawlessness and an abandonment of constitutional protections,” Stevenson said. 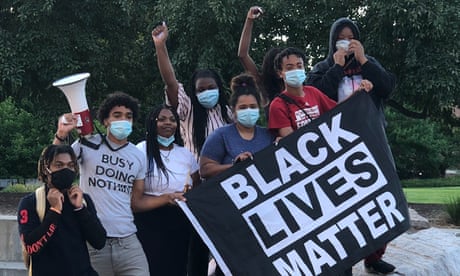 'It was time to take charge': the Black youth leading the George Floyd protests

He added: “That explains much of the moment we are now in – until there is a deep reckoning of this history of violence and racial oppression we cannot repair and remedy, and without that we are not going to be able to create the society we want.”

The light shone by EJI on the brutal events of Reconstruction comes at a critically important time for racial justice in America. The country is in the grip of protests following the police killing of George Floyd in Minneapolis, with demonstrations in more than 750 US cities demanding change.

It also follows the shooting death of Ahmaud Arbery in Georgia which has been called a modern-day lynching.

The report lands just days before Juneteenth, Friday’s annual celebration to mark the day in 1865 when the emancipation proclamation was finally read out by Union soldiers in Texas – the last state in the Confederacy in which slaves were freed. 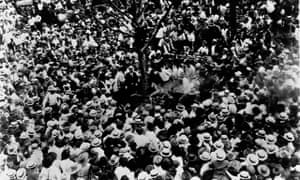 Stevenson said that the outpouring of protest across the nation underlined the need for a historical reckoning. “We have to acknowledge what the damage is, tell the truth about the harm and injury, then we can begin to imagine what repair and remedy looks like. The truth has to come first – and we haven’t done that.”

EJI’s new report depicts the paradox of how quickly the promise of freedom was stolen from freed black Americans. In the first flush of emancipation, more than 3 million black people living overwhelmingly in the south rushed to claim the benefits of citizenship.

A swath of equal rights groups popped up encouraging freed slaves to register to vote. By the summer of 1867, about 80% of eligible black male voters had registered in all but one of the 11 former Confederate states.

Black representation followed, with some 2,000 black men holding elected office during Reconstruction. In 1870 Hiram Revels from Mississippi took a seat in the US Senate, the first African American to serve in Congress.

Such an extraordinary surge of black political participation was matched, however, by an equal and opposite surge of white violence designed to put black people back in the box.

On 24 December 1865, less than three weeks after the 13th amendment was ratified abolishing slavery, six former Confederate leaders came together to form the first chapter of the Ku Klux Klan and began what WEB Du Bois described as “armed guerilla warfare”. Appalling acts of sadistic homicidal terrorism, targeted frequently against nascent black leaders who were at the forefront of the movement to claim the benefits of citizenship, were swift to follow.

It was no coincidence that what motivated the murderers was a desire to suppress black voter turnout in Opelousas in the run-up to the 1868 presidential election. Withholding the vote from the country’s new citizens was seen as a crucial means of reimposing white supremacy in the absence of the physical chains of slavery.

Other acts of mass violence were committed against black people who had the audacity, after slavery was ended, to ask to be paid for their work in the fields. Still others were killed because they tried to leave the cotton plantations where they had been enslaved, or because they set up schools to teach black children how to read.

Most of the violence occurred in the south but the north was not exempt or guiltless.

The report honors the memory of Octavius Catto, an African American veteran of the Union army who worked hard to organize black citizens in Philadelphia. He was killed by a white supremacist in October 1871 as he was on his way back home having voted in a mayoral election.

Stevenson thinks there is a powerful message of hope to emerge from the grim record of racial terrorism under Reconstruction. In 12 short years, the white supremacists managed through a whirlwind of violence to change the entire course of American history – putting the country on the path towards inequality and discrimination under which it still labors today.

“If they could do so much in 12 years, why can’t we? In 12 years we could change the entire direction of the country. If we engage in a vigorous, committed effort of truth telling and repair, we might create a new century where things are very different.”

Ed Pilkington is chief reporter for Guardian US. He is the author of Beyond the Mother Country. Twitter @edpilkington. Click here for Ed's public key