So our message must be clear: Time’s up for Donald Trump! You will get blasted in the popular vote and crushed in the Electoral College. 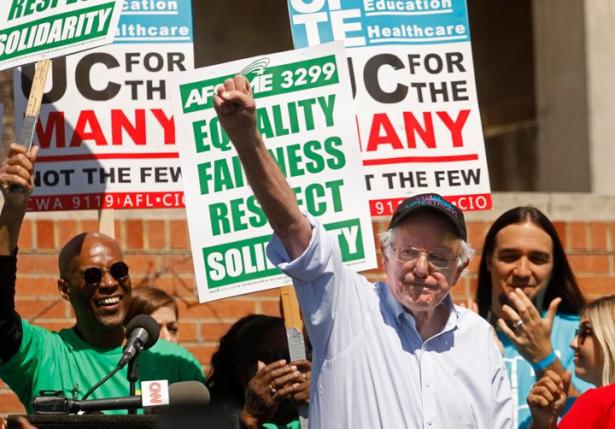 Since the horrible police murder of George Floyd, thousands of Americans of all races have taken to the streets in impressive displays of movement power. The recent Juneteenth actions even featured some dramatic actions by unions across the country and labor’s ideological spectrum. For example, the left-leaning International Longshore and Warehouse Union shut down the West Coast Ports and the more traditionally conservative Boston Building Trades Council organized an 8 minute, 43 second work stoppage.

Now legislative bodies, sports leagues and the U.S. military are racing to make concessions that can calm the roiling waters of mass protest and disgust. And while our November 3 election day may seem a long way off, it will be here before we know it. Between now and then, the street protests must continue and hopefully escalate. However, without a decisive political verdict at the ballot box to remove Donald Trump, our protests will not reach their potential.

LESSONS FROM THE 2018 MID-TERMS

For some of us, this poses some hard choices. Undoubtedly, millions of union members and workers who wholeheartedly supported Bernie Sanders in the 2020 Democratic presidential primaries are now feeling disillusioned and demoralized about the prospects of former Vice President Joe Biden as the Democratic Party’s nominee. As organizers and volunteers for Labor for Bernie, we feel your pain. However, every political decision requires a concrete analysis of the specific conditions in that moment. This is the moment to learn lessons from our recent history.

In 2018, we argued forcefully that the political task of the moment was “Flipping the House.” We called on our sisters and brothers in the labor movement to go “all in” to recapture the House of Representatives. We believed this was of importance for two simple reasons:

Those of us who volunteered in the 2018 mid-term campaign often elected “corporate” Democrats whose politics were far from our progressive values. However, by electing these less than perfect candidates, we flipped the House in stunning fashion. In California alone, seven historically Republican seats flipped to Democrat.

The results were exactly as predicted. The majority Democratic House impeached Trump, exposed his misdeeds, and blocked some of his most regressive legislative measures. The fact that the Democrats controlled the House gave meaningful voice and space to the left – especially to the “Squad” led by Alexandria Ocasio-Cortez. Of course, they were often at odds with Speaker of the House Nancy Pelosi, but they were omnipresent precisely because the Democrats were in the majority. Absent that majority, they would have been obscure backbenchers in a Republican-led house.

A VEHICLE TO STOP TRUMP

We are confronted with a similar dynamic in November 2020. That’s why it is so important for Sanders’ supporters to rise to the occasion and become a powerful force in support of Joe Biden for President.

Biden is a vehicle to stop Trump, preserve our democratic rights, and give the left and labor more breathing space as Leo Panitch argued on Jacobin Radio. This will not be an easy task. The Orange Monster will continue to brilliantly play his game of divide and conquer. He will sow division by playing on racism and threatening a military crackdown because Democratic governors are too soft on anti police violence protesters.

And then there is “sleepy Joe” Biden who, completely tone deaf to the moment, suggests that cops should be trained to fire at people’s legs rather than their hearts. As much as “blundering Biden” discredits himself and makes a parody of the “lesser of two evils,” our responsibility as partisans of the working class and all those facing racial oppression remains clear: We must unite all who can be united in November to Dump Trump – and that can only be done by voting for and working for Joe Biden in every state in the union. Any razor thin margin in the popular or electoral vote could actually encourage Trump to stay on.

As historian Van Gosse recently wrote, “Given the real possibility of Trump winning again via votes suppressed and votes bought, just enough to take the Electoral College, we face a stark necessity. The majority must mass together to defeat Trump and crush Trumpism. We cannot stay where we are, we will move forward or we will move back. Democracy, all that we have fought for and not-yet achieved, is on the line.”

For labor organizers, the recent National Labor Relations Board decision that there cannot be any union discussion between workers on the clock should be a motivation enough. Talk sports, talk politics, talk family, but no union talk.

So our message must be clear: Time’s up for Donald Trump! You will get blasted in the popular vote and crushed in the Electoral College.

A legitimate concern for many of us is that when Biden is inaugurated in January 2021 we will return to the same Obama-era neo-liberal agenda that created much of the suffering and discontent that led to Trump’s election. How do Sanders’ supporters maneuver while campaigning for Biden and entering a popular front with forces that have no interest in our agenda?

Our Revolution – the Sanders-sponsored national network of grassroots groups – has proposed three key ways that we can best function in 2020, recognizing that an historic and crushing defeat for Trump – in which we play an important part – will advance our agenda:

To Our Revolution’s three we would add a fourth goal:

Our collective work to defeat Trump will be an imperfect but necessary alliance inside the Democratic Party — with at best an imperfect program. But to quote a famous German philosopher, “Every step of real movement is more important than a dozen programmes.”

If there ever was a real movement to unite with then it is of course Black Lives Matter and the protests sweeping the country and the world over the murder George Floyd. Much of the participation in these protests, particularly by thousands of young people of all races, has been fueled by veterans of the Sanders’ campaigns and the radicalization of youth in the United States. The protests are impacting culture, sports and politics as usual. When NFL Commissioner Roger Goodell apologizes to Colin Kaepernick, we know there has been a major shift in public opinion.

Trump has already demonstrated his disdain for the protests and has threatened the use of the U.S. military to quell the demonstrations. This could even be a dress rehearsal for the day after the election when he is declared the loser – and contemplates refusing to leave. The street protests that we are seeing now will need to be amplified by millions more people in November – erasing any doubt about attempting to use military power to remain in office.

For Bernie’s supporters, it is not too early to identify down-ballot races, particularly in “Tri-Fecta” states, and make plans for building cross-union solidarity to power a blue wave across the country. The same approach applies to “safe” blue states. Find down ballot races and find union partners across industry and craft to run up the popular vote totals for Joe Biden so that we rid the outcome from any uncertainty and end the Trump nightmare.

The Black Lives Matter mass uprisings for racial justice, the movement for workers’ rights and health care for all in the midst of the pandemic, and the urgency of providing massive public assistance in an emerging economic depression send a message to a President-elect Biden. It puts Biden and Congress on notice that the agenda of a new administration must go beyond platitudes and neo-liberal payoffs to the corporate elites. If we can stop a fascist takeover at the ballot box and in the streets, so too can we transform America.

When there are only two viable electoral choices, the decision to choose a neoliberal over a neofascist does not mean support for the neoliberal cause. Our campaign to Dump Trump is an essential next step to building working class power by combining class-based electoral work with an ongoing effort to expand and transform the labor movement.

This article is being published simultaneously on Organizing Upgrade and The Stansbury Forum.