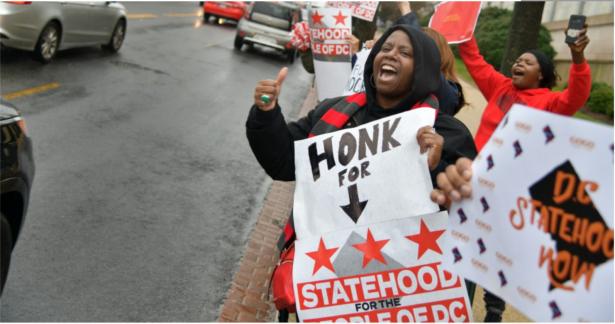 Pro-democracy groups applauded House Democrats on Friday for passing historic legislation that would grant statehood to Washington, D.C. and give equal representation to the more than 700,000 people who live there.

The Washington, D.C. Admission Act (H.R. 51) was introduced by Del. Eleanor Holmes Norton (D-D.C.), the only federal lawmaker representing the District in Congress. As a delegate who is only able to vote on procedural and committee votes, Norton—who has served since 1991—was not permitted to vote for the legislation she sponsored.

Nearly every voting Democrat supported the legislation, with only Rep. Collin Peterson (D-Minn.) joining Republicans to vote against it. The bill passed with a vote of 232-180, 27 years after the issue was last taken up by the House.

"A lot has changed in 27 years," tweeted Norton shortly before the vote.

The legislation was passed amid the ongoing nationwide uprising over racial injustice. A majority of the District's residents are people of color, and 47% of them are black.

The congresswoman spoke on the House floor Friday, saying Congress has "both the moral obligation and the constitutional authority to pass the bill."

The bill would reduce the size of the District to two square miles where many federal buildings are located while the rest of D.C. would be established as a state. The small number of people who live within the federal District would be given the right to vote absentee in their home states. Under the legislation, D.C. would have representation in the U.S. Senate for the first time.

"We applaud the House action today because D.C. statehood is a racial equity issue for everyone—not just the people who live there," said Ben Jealous, president of People for the American Way. "At the global level, denying full citizenship to D.C.'s largely black and brown population sends an appalling message to the world. At the national level, it perpetuates entrenched power in Congress that too often stymies real progress on racial equity. And at the local level, it creates deeply racially unjust outcomes for its residents, including shortchanging the district in recent relief for coronavirus. It's long past time to make D.C. statehood a reality, and it should be a priority for all of us who care about equality and opportunity."

The Trump administration claims the bill is unconstitutional and violates the 23rd Amendment, which gave D.C. residents the right to vote in presidential elections and granted the District three electoral votes. Senate Majority Leader Mitch McConnell has said he has no plans to take up the legislation in the Senate, and the Office of Management and Budget said Wednesday that the president would veto the measure should it pass in Congress.

"Congress has two choices. It can continue to exercise undemocratic, autocratic authority over the 705,000 American citizens who reside in our nation’s capital, treating them, in the words of Frederick Douglass, as 'aliens, not citizens, but subjects.' Or Congress can live up to this nation's promise and ideals and pass H.R. 51."
—Del. Eleanor Holmes Norton (D-D.C.)

With Republicans committed to standing in the way of granting D.C. full participation in the nation's democratic process, advocates acknowledged Friday that more work must follow the landmark vote.

"For far too long, D.C.'s residents, a majority of whom are people of color, have been denied equal representation in Congress and a full voice in the laws that govern them," said Sean Eldridge, founder of Stand Up America. "It's outrageous that Ted Cruz or other right-wing federal lawmakers elected thousands of miles away continue to have control over D.C.’s local laws—from housing policy to protecting reproductive rights to gun control."

"This momentum for D.C. statehood must continue—and it's now time to abolish the legislative filibuster to make D.C. statehood possible with 51 votes in the Senate," he added.

D.C. Mayor Muriel Bowser said Thursday she is prepared to wait until the next Congress commences early next year for the legislation to become law.

As Norton pointed out, "The Constitution does not establish any prerequisites for new states, but Congress generally has considered three factors in admission decisions: resources and population, support for statehood and commitment to democracy."

Washington, D.C. residents pay the most federal taxes per capita in the nation, and the population of the District is greater than that of Wyoming and Vermont. It has a larger budget than 12 states and a higher G.D.P. than any state in the country, and relies on federal funding less than five states. D.C. residents also strongly support statehood, with 86% voting in favor in 2016.

"Congress has two choices," said Norton. "It can continue to exercise undemocratic, autocratic authority over the 705,000 American citizens who reside in our nation’s capital, treating them, in the words of Frederick Douglass, as 'aliens, not citizens, but subjects.' Or Congress can live up to this nation's promise and ideals and pass H.R. 51."