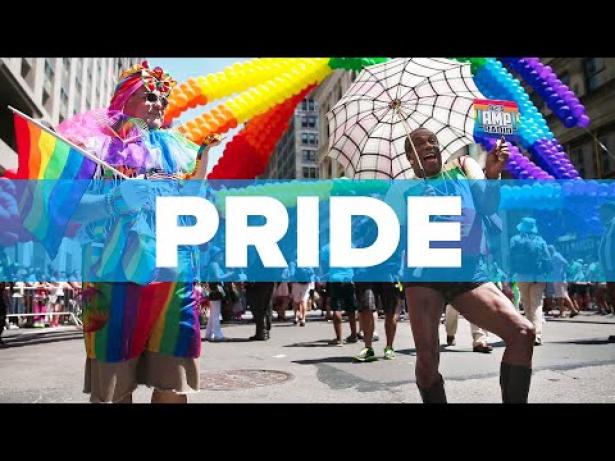 The momentum of civil unrest across the U.S. and beyond demonstrates the strength and effectiveness of decentralized, coalitional movement organizing models. Contemporary racial justice organizing is part of a long legacy of abolitionist, Pan-Africanist, anti-colonial, civil rights, Black liberation struggles. Recent protests embody feminist and queer of color justice, born out of a legacy of LGBTQ activism.

This June, we celebrate LGBT History during Pride month and Juneteenth in the midst of ongoing protests against anti-Black racism and violence. Director of the National Black Justice Coalition, David J. Johns noted that, “Pride month, to be clear, is an extension of Black History Month.”  How can we amplify young Black voices demanding justice for Tony McDade, Iyanna Dior and the many Black queer and trans bodies murdered at the hands of state-violence? They march ahead of a legacy of queer and trans insurrections, from the Compton Cafeteria Riots in 1966 to the Stonewall Riots of 1969. They march with the spirits of trans women of color activists Marsha P. Johnson, Miss Major Griffin-Gracy, and Sylvia Rivera, who demanded justice for trans lives and promoted an intersectional platform that advocated for justice and dignity of all gender and sexual minorities, poor people, sex workers, immigrants and other oppressed groups. Too often protests and insurrections against racial injustice are viewed as separate from LGBT rebellions and struggles against homophobic and transphobic violence. Yet, LGBT people of color are disproportionately victimized by racialized, homophobic, and transphobic violence, often perpetrated by police.

Not surprising then that historically, Black queer and trans communities have been in the vanguard of both LGBTQ and racial justice campaigns. Contemporary movements for the human rights and dignity of Black lives – from the #BlackLivesMatter Global Network to the Movement for Black Lives (#M4BL) coalition – are fundamentally intersectional, conceived by Black queer women and sustained by the labor of LGBTQ communities and our allies. As Angela Davis reminds us, when movements center Black women, both cis and trans, justice for all becomes not only a conceptual option but a reality. For as Davis insists, “when black women win victories, it is a boost for virtually every segment of society.”

In 2014, #BlackLivesMatter (BLM) co-creator Alicia Garza documented the herstory of the movement, calling it, “an ideological and political intervention in a world where Black lives are systematically and intentionally targeted for demise” and “an affirmation of Black folks’ contributions to this society, our humanity, and our resilience in the face of deadly oppression.” She noted how Black queer women’s leadership in imagining and building the movement was largely erased by supposed allies. Garza gives us the language to understand the intersectional imperative of BLM: “Black Lives Matter affirms the lives of Black queer and trans folks, disabled folks, Black- undocumented folks, folks with records, women and all Black lives along the gender spectrum. It centers those that have been marginalized within Black liberation movements. It is a tactic to (re)build the Black liberation movement.”

Many organizations today are working woke. 75 LGBTQ+ organizations signed on a letter of solidarity in support of BLM. GLAAD, a progressive LGBTQ media monitoring organization, put out a list of organizations where individuals can donate support funds. With Black LGBTQ leaders at the helm, many groups and solidarity collectives around the country are calling to amplify the voices of people of color. These include Scholars for Social Justice,  BYP100, The Audre Lorde Project and The Okra Project in New York City, Austin LGBT for Black Lives, All Black Lives Matter in Los Angeles, Black Visions Collective in Minneapolis-St. Paul, BreakOUT! in New Orleans, and D.C.’s Center for Black Equity and the National Black Justice Coalition.

With Pride month occurring during the COVID-19 pandemic, most celebratory events have been cancelled. Pride organizers around the country have recently launched solidarity events in support of BLM protests. These include NYC Pride, the LA Pride Parade and Festival and the BLM Pride rally in Kalamazoo, MI. Estevan Montemayor, president of the board of Christopher Street West (the non-profit organization that produces the LA Pride Parade and Festival) stated that: “Fifty years ago Christopher Street West took to the streets of Hollywood Blvd in order to peacefully protest against police brutality and oppression. It is our moral imperative to honor the legacy of Marsha P. Johnson and Sylvia Rivera, who bravely led the Stonewall uprising, by standing in solidarity with the Black community against systemic racism and joining the fight for meaningful and long-lasting reform.”

These solidarity efforts have been called out as some event organizers failed to include leaders of local Black organizations in the planning. Raquel Willis, a Black transgender activist, writer and former editor at Out magazine, noted the contradictions in LA Pride organizers capitalizing on the names of Johnson and Rivera, “without having any of the Marshas and Sylvias up there today involved with the leadership of their work.” Ashlee Marie Preston, editor-in-chief of Wear Your Voice magazine, pressed for solidarity work to center Black leadership. In a Facebook video, Preston called out the LA Pride organizers for not involving local Black leaders in the organizing of the solidarity march and emphasized the need to trust “Black leadership and following our cues.” She also reminded allies that, “using a Black organization’s name without its permission or consent” both “undermines the work, … dilutes the message… and weakens the overall impact.”

As early as 2014, Alicia Garza presciently cautioned us that state violence not only looks like police repression but also the disposability and fetishizing of Black queer and trans lives. Our bodies are fetishized and erased by mainstream LGBTQ activism, including in the marketing and promotions of annual pride events. In 2015, QTPOC Liberation (Oakland, CA) put out an open letter pressuring mainstream LGBT organizations to take action against anti-black racism and violence to, “guarantee that the safety of Black lives is central to your organization’s work, policy, and practice.” In 2019, the Reclaim Pride Coalition (RPC) was formed as NYC’s alternative pride march, after years battling with the official NYC Pride organizer, Heritage of Pride. RPC renamed the annual event the “Queer Liberation March for Black Lives and Against Police Brutality.” Tlhe exclusion and fetishization of Black LGBT people in mainstream pride events have spawned many alternative Black pride events. Today, Black pride events take place annually across the U.S. These alternative and counterspace actions are more than acts of solidarity, they are a reminder that queer liberation is Black liberation, and justice for Black lives translates into justice for all.

Mako Fitts Ward is a clinical assistant professor and faculty head of African and African American Studies in the School of Social Transformation at Arizona State University.

Marlon M. Bailey is an associate professor of Women and Gender Studies and coordinator of the LGBT Studies Certificate in the School of Social Transformation at Arizona State University.