If federal unemployment benefits are not extended when they expire next month, millions of households will be facing both steep rent and unemployment with no assistance. And that means mass evictions. 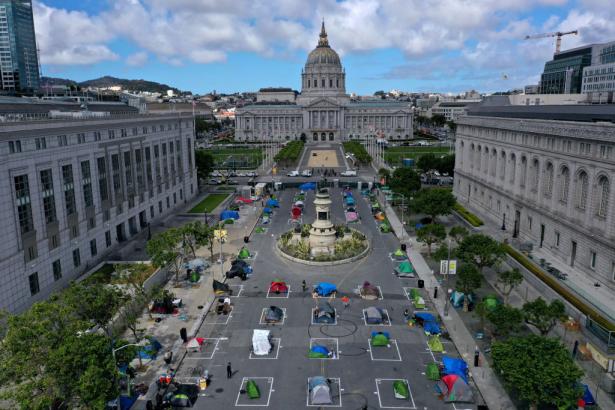 An aerial view of San Francisco's first temporary sanctioned tent encampment for the homeless on May 18, 2020 in San Francisco, California. , Justin Sullivan / Getty

Were it not for the passage of the Coronavirus Aid, Relief, and Economic Security (CARES) Act, which authorized a one-time stimulus check to most Americans and weekly unemployment payments of $600 per week on top of state unemployment benefits, researchers at Columbia University expect that 12 million additional people would have been plunged into poverty.

The CARES Act helped avert that Great Depression–level disaster. A separate study found that poverty rates fell during April and May, due in large part to the fact that the unemployment assistance exceeds what most eligible recipients were earning.

Unfortunately, CARES unemployment assistance is now set to expire on July 31. Among other ugly inevitabilities, this means we’re staring down the barrel of a housing crisis.

While it’s true that businesses are reopening across the country (however irresponsible that is from a public health perspective), it’s also the case that, as Federal Reserve chair Jerome H. Powell said earlier this month, there will be “a significant chunk . . . who don’t get to go back to their old job, and there may not be a job in that industry for them for some time.” The Economic Policy Institute reports that nearly 11 percent of the workforce is out of work and has no reasonable chance of getting called back to a prior job.

No matter how many businesses reopen, the economy is not going to recover by the end of July. Millions of people are going to remain jobless, and if unemployment benefits are not extended, they will not be able to cover their living costs. One of the consequences of this will undoubtedly be a wave of evictions.

Part of the reason these numbers are so high is that rent-burdened households, of which there are roughly 20 million in the United States, are twice as likely to experience job loss in the first place. The same people who can comfortably afford their rent or mortgage are the ones who are able to work remotely or who have a financial cushion in the event of job loss. Meanwhile, those whose jobs are on the chopping block are those who earn less to begin with.

If unemployment benefits are not extended, and no other adequate federal aid materializes, the researchers at UrbanFootprint warn that “the level of displacement would be unparalleled in U.S. history and carries the potential to destabilize communities for years to come.” Thus, they conclude that “the United States is on the precipice of a COVID-induced housing crisis.”

Leading Republicans are arguing that an extension of CARES unemployment benefits will discourage people from going back to work — never mind that the jobs required simply aren’t there. Democrats are split, with more progressive representatives demanding a full extension of the benefits and more conservative representatives agreeing with Republicans that the horror of working-class idleness is simply not worth the cost of sparing potentially millions of households from eviction.

If Republicans and conservative Democrats get their way, their zealous austerity will wreak havoc on millions of people who have no job, no income, and no choice. At least the locksmiths will remain gainfully employed.