China’s leaders believe the only purpose of nuclear weapons is to allay the fear of a nuclear attack. But they are worried. The US has refused to rule out a nuclear first strike, and they’re dealing with a hostile and very impulsive US president. 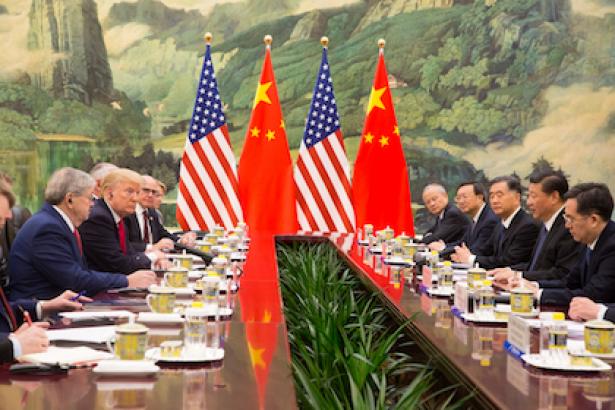 President Trump in a 2017 bilateral meeting with Chinese President Xi Jinping in Beijing. If the US moves forward with plans to waste trillions on modernizing its nuclear arsenal, China is unlikely to follow., Official White House Photo/Shealah Craighead

China has a few hundred nuclear warheads. The United States and Russia each have several thousand. There are questionable reports China may double the size of its nuclear stockpile by the end of this decade. Even if that’s true, China’s arsenal would still be five to six times smaller than the current arsenals of the two nuclear giants.

China has had the fiscal and technical resources to match U.S. and Russian numbers for quite a while. So, why is China’s nuclear arsenal still so small? That’s a question worth asking before publishing alarming and misleading headlines about a Chinese nuclear buildup.

These beliefs are not derived from abstract theories about nuclear deterrence. They are a product of China’s own experience.

In 1950, some Chinese leaders feared the United States would bomb Beijing and Shanghai if they intervened in the Korean War. They warned Mao the atomic bombing of major Chinese cities could destroy their newly established government. Chinese troops sent to defend the border with Korea were scared of the atom bomb. Morale was low and defections were high.

Mao argued the dangers of letting North Korea fall were much greater than the risks of a U.S. nuclear attack. He told his colleagues the United States wouldn’t use atomic bombs to destroy Chinese cities because the political costs were too high. Mao convinced his troops the United States couldn’t use atomic bombs on the battlefield because they were so destructive they would kill the Americans too.

President Truman threatened to use nuclear weapons after Chinese troops crossed the border. He didn’t and Mao felt vindicated. But it was a terrifying experience that pushed Chinese leaders to develop their own nuclear weapons. A second round of U.S. nuclear threats during Taiwan Strait Crisis renewed their determination.

When China successfully exploded its first atomic device in October 1964 it released the only public statement its leaders ever made about why they built the bomb. President Johnson ignored it. So have generations of U.S. journalists, experts, and officials. Chinese military strategists treat it like gospel.

The statement declares China will never use nuclear weapons first or threaten to use them against non-nuclear weapons states. It says China still believes nuclear weapons are a paper tiger, that China does not believe in the “omnipotence” of the atom bomb and that China did not develop it to use it. But there’s one sentence that gets to the heart of Chinese thinking. Referring to the United States, it says,

If the sole purpose of having nuclear weapons to is convince yourself you can safely call the bluff of a nuclear-armed adversary, you don’t need to prepare to strike first. All you need is to be reasonably sure your enemy knows they are vulnerable to retaliation. You don’t need a lot of nuclear weapons to do that, especially if you can protect what you’ve got. That’s why China puts most of its nuclear-capable missiles on trucks that ride around in massive mazes of underground tunnels.

China has been gradually upping its numbers because of the troubling combination of improvements to U.S. precision guided munitions and the expansion of U.S. missile defenses. Chinese strategists worry that a reckless U.S. president might mistakenly believe this combination of new technologies makes the United States invulnerable to Chinese nuclear retaliation.

Modestly bumping up its numbers and modernizing its missiles to carry multiple warheads to better penetrate defenses are understandable Chinese hedges against technological uncertainty. There’s nothing inherently aggressive or alarming about this. It does not necessarily portend a change in Chinese nuclear thinking or a desire for numerical parity with the United States.

Chinese leaders have good cause to worry. The United States has consistently refused Chinese requests to rule out a disarming first strike against Chinese nuclear forces. U.S. officials have never acknowledged, much less accepted, U.S. vulnerability to Chinese nuclear retaliation. And now China’s leaders are dealing with an overtly hostile and impulsive U.S. president who seems incapable of understanding the impact of new technologies on China’s small nuclear arsenal or interested in appointing diplomats who care.

Take Marshall Billingslea, for example, President Trump’s special envoy for arms control. Last week in Vienna, instead of earnestly engaging Chinese officials, he was trolling them on Twitter with a staged photo of Chinese flags next to empty chairs at a meeting China was not scheduled to attend about extending a treaty to which China is not a party. What’s the point of talking to a person who behaves so childishly about such a grave matter?

Billingslea bragged the United States would spend China “into oblivion” to win a new nuclear arms race. But there’s no sign China is going to waste its money on a numbers game. China has held total military spending to approximately two percent of its gross national product every year since 1988. It invests most of that money in conventional weapons the military can use rather than nuclear weapons it cannot.

Chinese decisions on defense spending are premised on the prudent assumption the best way to strengthen the Chinese military is to grow the Chinese economy. Chinese leaders believe that excess military spending, especially on the nuclear arms race with the United States, contributed to the collapse of the Soviet Union.

If the United States moves forward with current plans to waste trillions on modernizing its nuclear arsenal, China is unlikely to follow. Its leaders will spend just enough to convince themselves the United States knows China can still retaliate. Their past experience with US nuclear threats suggests that’s all they need to maintain their dignity and prevent the United States from starting a nuclear war with China.

[Gregory Kulacki is a Senior Analyst and the China Project Manager for the Global Security Program of the Union of Concerned Scientists (UCS). He served as the China Director for the Council on International Educational Exchange, as an Associate Professor of Government at Green Mountain College and as the Director of External Studies at Pitzer College before joining UCS in 2002. He is fluent in Mandarin Chinese and has spent more than twenty years living and working in China. He can be reached @gkucs.]