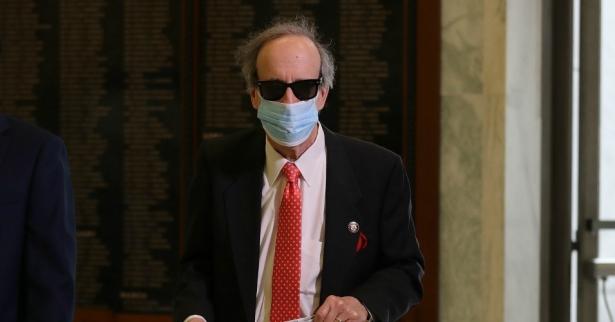 Dozens of progressive groups on Tuesday urged the House's Democratic leadership to select a Foreign Affairs Committee chair who "advances the bold, progressive foreign policy that this country deserves."

The groups made their case in a letter led by Demand Progress and Win Without War and sent to Speaker Nancy Pelosi (Calif.), Majority Leader Steny Hoyer (Md.), and Majority Whip James Clyburn (S.C.). The letter lays out 10 guiding principles to choose a candidate, beginning with lawmaker's expressed commitment to "ending our endless wars."

According to the Washington Post, Rep. Joaquin Castro of Texas is likely to announce this week his intention to compete for the chairmanship. Castro is anticipated to vie for the seat against Reps. Brad Sherman of California and Gregory W. Meeks of New York

Castro's comments to the Post suggest his vision of the House body would broadly align with that laid out in the new letter. "Our foreign affairs committee needs to catch up with where Democrats are in terms of foreign policy," Castro told the outlet. "Over the years, there have been top many voices excluded; I think too often Palestinian voices have been excluded," he said.

In the new letter, the groups address what they see as a misalignment between the party writ large and the committee.

"For years, there has been a disconnect between HFAC and the rest of the House Democratic Caucus regarding the United States' most consequential foreign policy issues, such as the Iraq War, President Obama's diplomatic agreement to limit Iran's nuclear program, and the Trans Pacific Partnership," states the new letter, backed by a total of 70 groups. "We ask that you take this opportunity to support someone for committee chair who has a demonstrated track record of foreign policy leadership reflecting the principles, priorities, and aspirations of both the Democratic Caucus and rank-and-file Democratic voters."

That kind of individual would advance "a vision of restraint and progressive realism in U.S. foreign policy," the letter states. In addition to stopping endless wars, the groups call for a committee chair who's expressed commitment to policies including opposing militarization and surveillance at home;  a diplomacy-first approach to national security; opposing regime change; opposing broad-based sanctions that harm civilians; supporting a just resolution to the Israeli-Palestinian conflict; a global economy that prioritizes people and the planet, not corporate profit; ending the arms sales rubber stamp; a demonstrated record of independence from special interests;  and that refugees are welcome here.

Although Engel isn't named specifically in the letter, a recent op-ed from Win Without War executive director Stephen Miles explains how the candidate his and the other groups are pushing for would mark a total about-face compared to the New York congressman. Miles wrote at Responsible Statecraft earlier this month:

[Engel] was one of only two dozen House Democrats out of 188 who ultimately voted against the Iran deal. Just one year later he would join with an even smaller group of Democrats to give the Republicans a narrow majority and defeat an effort to stop selling Saudi Arabia cluster bombs, bombs they were then dropping on civilians in Yemen. And of course this all followed his enthusiastic support for the Iraq War. Bowman made all of these issues central to his campaign and attacked Engel directly on this record.

As Erica Fein, advocacy director at Win Without War, told The Hill, calls for transformation are getting louder.

"A progressive movement is demanding change on foreign policy; we hope Congressional Democrats are listening," she said.