Patriotic Dissent: How a Working-Class Soldier Turned Against “Forever Wars”

American foreign policy is often relegated to the margins of political consciousness in the US. But some of the most powerful voices against US intervention are those who have come from inside the military — and turned vehemently against it. 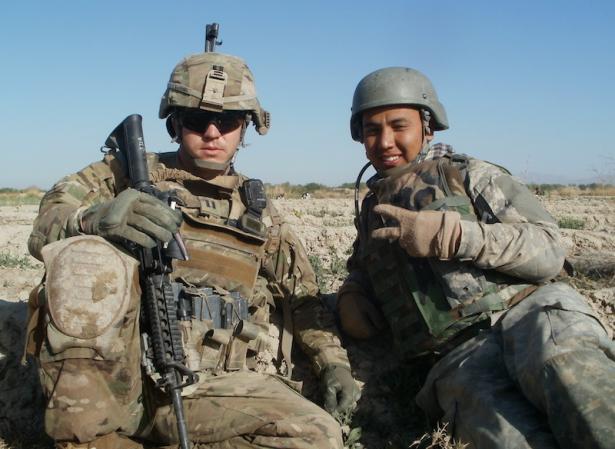 Then-captain Daniel Sjursen (left) pausing during a patrol with his interpreter Ali in Kandahar Province, Afghanistan in 2011.,

When it comes to debate about US military policy, the 2020 presidential election campaign is so far looking very similar to that of 2016. Joe Biden has pledged to ensure that “we have the strongest military in the world,” promising to “make the investments necessary to equip our troops for the challenges of the next century, not the last one.”

In the White House, President Trump is repeating the kind of anti-interventionist head feints that won him votes four years ago against a hawkish Hillary Clinton. In his recent graduation address at the military academy West Point, Trump recycled applause lines from 2016 about “ending an era of endless wars” as well as America’s role as “policeman of the world.”

In reality, since Trump took office, there’s been no reduction in the US military presence abroad, which last year required a Pentagon budget of nearly $740 billion. As military historian and retired career officer Andrew Bacevich notes, “endless wars persist (and in some cases have even intensified); the nation’s various alliances and its empire of overseas bases remain intact; US troops are still present in something like 140 countries; Pentagon and national security state spending continues to increase astronomically.”

When the National Defense Authorization Act for the next fiscal year came before Congress this summer, Senator Bernie Sanders proposed a modest 10 percent reduction in military spending so $70 billion could be redirected to domestic programs. Representative Barbara Lee introduced a House resolution calling for $350 billion worth of Department of Defense cuts. Neither proposal has gained much traction, even among Democrats on Capitol Hill.

Instead, the House Armed Services Committee just voted 56 to 0 to spend $740.5 billion on the Pentagon in the coming year, prefiguring the outcome of upcoming votes by the full House and Senate.

Even if Biden beats Trump in November, efforts to curb US military spending will face further bipartisan resistance. In the never-ending work of building a stronger anti-war movement, Pentagon critics, with military credentials, are invaluable allies. Daniel Sjursen, a thirty-seven-year-old veteran of combat in Iraq and Afghanistan is such a critic.

Inspired, in part, by Bacevich, who he acknowledges as a mentor, Sjursen has just published a new book, Patriotic Dissent: America in the Age of Endless War (Heyday Books). Written in a powerful voice, the book is composed of Sjursen’s political insights and painful personal reflections, rooted in the experience of an eighteen-year military career. It provides a timely reminder of just how costly, wasteful, and disastrous our post 9/11 wars have been.

Patriotic Dissent is a short book with just 141 pages, but it packs the same kind of punch as Howard Zinn’s classic 1967 polemic, Vietnam: The Logic of Withdrawal. Like Zinn, who became a popular historian after his service in World War II, Sjursen skillfully debunks the conventional wisdom of the foreign policy establishment, and the military’s own current generation of “yes men for another war power hungry president.” His appeal to the conscience of fellow soldiers, civilians, and veterans alike deserves the widest possible audience on the Left, and, hopefully, far beyond it.

Sjursen has the distinction of being a graduate of West Point, an institution that produces few political dissenters. He grew up in a working-class firefighter family on Staten Island. Even before enrolling at the Academy at age seventeen, he was no stranger to what he calls “deep-seated toxically masculine patriotism.” As a newly commissioned officer in 2005, he was still a “burgeoning neo-conservative and George W. Bush admirer” and definitely not, he reports, any kind of “defeatist liberal, pacifist, or dissenter.”

Sjursen’s initial experience in combat — vividly described in his first book, Ghost Riders of Baghdad: Soldiers, Civilians, and the Myth of the Surge — “occurred at the statistical height of sectarian strife” in Iraq. “The horror, the futility, the farce of that war was the turning point in my life,” Sjursen writes in Patriotic Dissent.

When he returned, at age twenty-four, from his “brutal, ghastly deployment” as a platoon leader, he “knew that the war was built on lies, ill-advised, illegal, and immoral.” This “unexpected, undesired realization generated profound doubts about the course and nature of the entire American enterprise in the Greater Middle East — what was then unapologetically labeled the Global War on Terrorism (GWOT).”

By the time Sjursen landed in Kandahar Province, Afghanistan, in early 2011, he had been promoted to captain but “no longer believed in anything we were doing.” He was, he confesses, “simply a professional soldier — a mercenary, really — on a mandatory mission I couldn’t avoid. Three more of my soldiers died, thirty-plus were wounded, including a triple amputee, and another over-dosed on pain meds after our return.”

Despite his disillusionment, Sjursen had long dreamed of returning to West Point to teach history. He applied for and won that highly competitive assignment, which meant the Army had to send him to grad school first. He ended up getting credentialed, while living out of uniform, in the “People’s Republic of Lawrence, Kansas, a progressive oasis in an intolerant, militarist sea of Republican red.”

During his studies at the state university, Sjursen found an intellectual framework for his “own doubts about and opposition to US foreign policy.” He completed his first book, Ghost Riders, which combines personal memoir with counterinsurgency critique. Amazingly enough, it was published in 2015, while he was still on active duty, but with “almost no blowback” from superior officers.

Before retiring as a major four years later, Sjursen pushed the envelope further, by writing more than a hundred critical articles for TomDispatch and other civilian publications. He was no longer at West Point, so that body of work triggered “a grueling, stressful, and scary four-month investigation” by the brass at Fort Leavenworth, during which the author was subjected to “a non-publication order.”

At risk were his career, military pension, and benefits. He ended up receiving only a verbal admonishment for violating a Pentagon rule against publishing words “contemptuous of the President of the United States.” His “PTSD and co-occurring diagnoses” helped him qualify for a medical retirement last year.

Sjursen has now traded his “identity as a soldier — the only identity I’ve known in my adult life — for that of an anti-war, anti-imperialist, social justice crusader,” albeit one who did not attend his first protest rally until he was thirty-two years old. With several left-leaning comrades, he started Fortress on a Hill, a lively podcast about military affairs and veterans’ issues.

He’s a frequent, funny, and always well-informed guest on progressive radio and cable TV shows, as well as a contributing editor at Antiwar.com, and a contributor to a host of mainstream liberal publications. This year, the Lannan Foundation made him a cultural freedom fellow.

In Patriotic Dissent, Sjursen not only recounts his own personal trajectory from military service to peace activism. He shows how that intellectual journey has been informed by reading and thinking about US history, the relationship between civil society and military culture, the meaning of patriotism, and the price of dissent.

One historical figure he admires is Marine Corps Major-General Smedley Butler, the recipient of two Medals of Honor for service between 1898 and 1931. Following his retirement, Butler sided with the poor and working-class veterans who marched on Washington to demand World War I bonus payments. And he wrote a best-selling Depression-era memoir, which famously declared that “war is just a racket” and lamented his own past role as “a high-class muscle-man for Big Business, for Wall Street, and for the Bankers.”

Sjursen contrasts Butler’s anti-interventionist whistleblowing nearly a century ago, with the silence of high-ranking veterans today after “nineteen years of ill-advised, remarkably unsuccessful American wars.” Among friends and former West Point classmates, he knows many still serving who “obediently resign themselves to continued combat deployments” because they long ago “stopped asking questions about their own role in perpetuating and enabling a counter-productive, inertia-driven warfare state.”

Sjursen looks instead to small left-leaning groups like Veterans for Peace and About Face: Veterans Against the War (formerly Iraq Veterans Against the War), and Bring Our Troops Home. US, a network of veterans influenced by the libertarian right. Each, in its own way, seeks to “reframe dissent, against empire and endless war, as the truest form of patriotism.” But actually taming the military-industrial complex will require “big-tent, intersectional action from civilian and soldier alike,” on a much larger scale.

One obstacle to that, he believes, is the societal divide between the “vast majority of citizens who have chosen not to serve” in the military and the “one percent of their fellow citizens on active duty,” who then become part of “an increasingly insular, disconnected, and sometimes sententious post-9/11 veteran community.”

Not many on the left favor a return to conscription. But Sjursen makes it clear there’s been a downside to the United States replacing “citizen soldiering” with “a tiny professional warrior caste,” created in response to draft-driven dissent against the Vietnam War, inside and outside the military. As he observes:

Nothing so motivates a young adult to follow foreign policy, to weigh the advisability or morality of an ongoing war as the possibility of having to put “skin in the game.” Without at least the potential requirement to serve in the military and in one of America’s now countless wars, an entire generation — or really two, since President Nixon ended the draft in 1973 — has had the luxury of ignoring the ills of US foreign policy, to distance themselves from its reality.

At a time when the United States “desperately needs a massive, public, empowered anti-war and anti-imperial wave” sweeping over the country, we have instead a “civil-military” gap that, Sjursen believes, has “stifled antiwar and anti-imperial dissent and seemingly will continue to do so.” That’s why his own mission is to find more “socially conscious veterans of these endless, fruitless wars” who are willing to “step up and form a vanguard of sorts for revitalized patriotic dissent.”

Readers of Sjursen’s book, whether new recruits to that vanguard or longtime peace activists, will find Patriotic Dissent to be an invaluable educational tool. It should be required reading in progressive study groups, high school and college history classes, and book clubs across the country. Let’s hope that the author’s willingness to take personal risks, rethink his view of the world, and then work to change it will inspire many others, in uniform and out.