Federal Agents Retreat to Portland Base as Protesters Control Streets 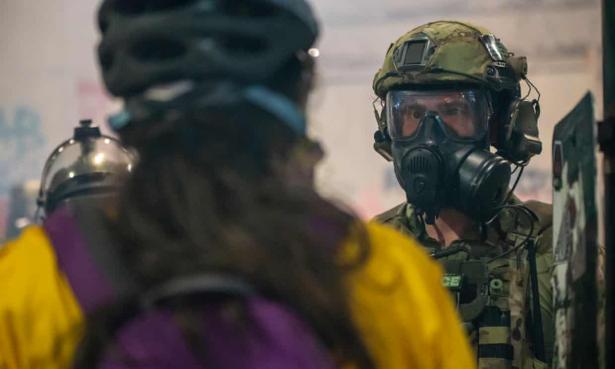 A federal officer stares down a protester in front of the Mark O Hatfield US courthouse on Tuesday in Portland, Oregon. , Photograph: Nathan Howard/Getty Images

Night upon night the chant goes up in front of Portland’s federal courthouse: “Whose streets?”

The answer depends on the hour of the day. After Donald Trump sent federal agents to take control of a city he said had been abandoned by its mayor to anarchists and mob rule, the protesters still turning out in support of Black Lives Matter can make a legitimate claim that these are, as the chant goes, “our streets”.

Department of Homeland Security taskforce agents were again out firing waves of teargas and throwing stun grenades against a hard core of a few hundred demonstrators in the early hours of Wednesday morning. The confrontation centered on the courthouse at the heart of several blocks of downtown Portland that have effectively fallen under the control of the protesters after the city police withdrew.

But after pushing back demonstrators, many of them kitted out in helmets and gas masks, the federal agents retreated into their courthouse citadel to mocking jeers and women who were part of the “Wall of Moms” protest linking arms and chanting: “Our streets.”

This ritual was played out three times on Wednesday morning but the end result was the same as every other night. The DHS officers dispatched by the president to put down the demonstrations have instead become prisoners of the building they are ostensibly there to defend.

“The feds don’t have control of the streets,” said a woman holding a sign, “100% not a terrorist”, who gave her name only as Shannon. “I think they’re more scared than us. They’re hiding in there. They don’t know what they’re doing.”

The view from Portland’s streets tells a different story.

The arrival of the federal officers, drawn from several agencies including the US Marshals Service and the border patrol, fleetingly sent a wave of alarm through the demonstrators after men in camouflage began snatching people off the streets in unmarked vans.

Those detained said they were dragged into the courthouse without being told why they were being arrested or by whom and then suddenly let go without any official record of being held. It smacked of police state tactics. So did some of the violence meted out by federal agents who looked more like an occupying army in a war zone.

But if the intent was to intimidate the protesters into abandoning the few square blocks of downtown Portland under their control, it backfired spectacularly. 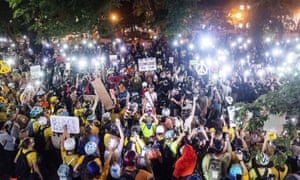 Residents of a city with a long history of radical street protest were outraged at the tactics which suddenly revitalized a protest movement that was waning after more than 50 nights of demonstrations.

It is now the federal agents who appear under siege, reduced to defending the courthouse from attempts to break in or set it on fire. In a visible surrender of ground, the DHS taskforce has even abandoned bothering to re-erect a fence around the federal building torn down on Saturday night.

Meanwhile, the protesters range free over several city blocks where businesses were first shut down by coronavirus and then boarded up after some shops were smashed in the initial protests that swept the country following the death of George Floyd in Minneapolis in May after a police officer knelt on his neck for nearly nine minutes.

The ubiquitous graffiti on stores, the county jail and the courthouse – including portraits of Floyd and violent denunciations of the police – mark out the protesters’ territory.

If Trump’s intent was to calm things down, he has failed. But if, as some suspect, the president wanted to ratchet up confrontation for political gain, then it is not clear that it has been a success either.

“It’s a power play by Trump. He thinks he’s going to get his base all riled up by pitting the forces of law and order against the anarchists,” said Josh O’Brien, who travelled from Seattle to join the protests. “But he’s fucked it up like he fucks everything up. Look who’s here with us. Grandmothers. Doctors. Because like most Americans they don’t think people should be abducted from the streets by the president’s secret police.”

The video of unidentifiable agents bundling Americans into unmarked vans may indeed not play well with some of Trump’s rightwing supporters for whom incidents such as the FBI’s killing of a woman and her teenage son during the 1992 siege at Ruby Ridge have come to represent what they see as an authoritarian federal government.

While the federal agents play out their nightly ritual, the city’s police are visibly absent. Although the Portland police bureau headquarters is in the building next to the federal courthouse, its officers appear to have abandoned any attempt to police the demonstrations after the mayor, who serves as police commissioner, sided with the protesters against the president. On top of that a court order limited the city police’s use of teargas and other means of restraint.

That has, in the eyes of some of the demonstrators, created a “liberated territory” similar to the “autonomous zone” in Seattle until it was cleared earlier this month

The federal court and neighboring county jail are opposite two parks that serve as the demonstrators’ base, and where a food stand has come to symbolize the endurance of the protests. Riot Ribs dispenses sustenance, including a vegetarian option, free to demonstrators. Members of the collective preparing the food have been targeted by federal agents charging out of the courthouse but have returned to cooking after each encounter.

Chris McGreal writes for Guardian US and is a former Guardian correspondent in Washington, Johannesburg and Jerusalem. He is the author of American Overdose, The Opioid Tragedy in Three Acts