Promoters of oil and gas industry extraction in the Arctic Wildlife National Refuge have adopted a new tack, terming all opposition to Artic drilling a “racist” attempt to deny Alaska’s Native communities an essential source of jobs and revenue. 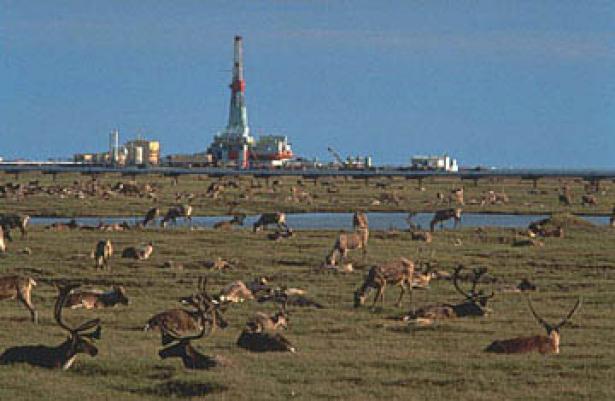 With oilfield facilities in the background, a huge caribou (reindeer) herd rests at Prudhoe Bay, between the National Petroleum Reserve and the Arctic National Wildlife Refuge on Alaska’s North Slope. , Jack Buckwalter

When Alaska's all-white Congressional delegation branded opposition to oil and gas drilling in the Arctic Wildlife National Refuge as a form of discrimination last month, they may have hoped to play into a national dialogue about systemic racism—not necessarily to spark it.

In a letter to the Federal Reserve on June 16, Senators Dan Sullivan and Lisa Murkowsi and Rep. Don Young, all Alaska Republicans, called on federal regulators to investigate whether the refusal of several banks to fund Arctic oil and gas projects discriminated against Alaska Natives, depriving them of social and economic benefits. The politicians had previously called the banks' refusal a discriminatory tactic "against America's energy sector."

But controversy followed quickly. In the weeks following the letter, Native organizers penned op-eds and climate activists posted on social media, blasting the three members of Congress for what they viewed as a hypocritical and misleading narrative.

Oil and gas advocates have for years maintained that opposition to fossil fuel companies equals "green racism," and have portrayed the industry as providing economic aid to marginalized communities by supporting economic development, sponsoring local programs and promising reliable and affordable electricity.

Some in Indigenous communities also argue in favor of fossil fuel development, given the opportunities it promises. But in Alaska and elsewhere, Indigenous activists concerned about the future of their communities and the planet are opposing drilling and spearheading a movement to end investment in fossil fuels.

The situation is complicated. Many Black and Indigenous communities in the United States, including Alaska Natives, lack opportunities for more environmentally sustainable development because of long histories of social, economic and political marginalization. Those histories are central to the current debate, raising the question of whether an embrace of fossil fuels by some members of these communities reflects a free choice, or one made out of necessity, given the circumstances left by centuries of systemic racism.

Among Alaska Natives, one of the organizers of the opposition to fossil fuels is Siqiñiq Maupin, who over a year ago broke from a corporate career in the oil and gas sector and became a vocal opponent of fossil fuel companies' activity, hoping to combat the claim that such opposition equals racism.

Maupin, who is Iñupiaq, wanted to show that, contrary to stereotypes of Alaska Natives as "oil-hungry" and money-seeking, "not all Iñupiat people want drilling." In 2019, Maupin co-founded Sovereign Iñupiat for a Living Arctic, a movement of Iñupiat people which aims to create spiritually, mentally and physically healthy communities in the Arctic.

The split over oil and gas drilling between elected and corporate leaders and Native organizers like Maupin reflects a broader division between prominent officials and the community members they claim to represent.

In a recent example, Rev. Jesse Jackson and National Urban League President Marc Morial backed calls for more racial diversity in the oil and gas workforce, while grassroots Black organizers bucked these calls as a false substitute for divestment from fossil fuels.

Industry advocates are aware that few, if any, comparable economic options are available to Indigenous communities in Alaska's North Slope, as are numerous officials and corporate leaders who have come out in favor of Arctic drilling. Oil and gas projects offer local jobs and generate revenue that funds new schools and infrastructure upgrades, even if they do so at a cost to the environment and public health.

Right-wing organizations like the Heartland Institute, which advocate for the petroleum industry, have helped to promote claims of "green racism" through posts on their website. At the same time, they have worked to demonize environmental activists who seek to shut down the fossil fuel industry, in effect pitting them against the best interests of low-income communities of color, which are disproportionately located in areas near fossil fuel operations.

A similar message has been promoted by the Life:Powered project, launched by the Texas Public Policy Foundation, an Austin-based conservative think tank that has ties to the conservative Koch brothers. In 2018, Life:Powered released a video featuring Navajo Nation members endorsing a local coal-fired power plant, which the video portrayed as under attack by "out-of-state billionaires and environmental extremists."

Jason Isaac, a senior manager and distinguished fellow of Life:Powered said the video sought to illustrate that "economic prosperity and environmental leadership go hand in hand." Isaac suggested that anti-fossil fuel activists may be missing how people's increased wealth can lead to increased concern for the environment. When surviving and providing for their family are people's top priorities, he said, the environment is "the last worry on their mind."

Fossil fuel companies and their proponents are not the only ones who argue that opposing drilling is discriminatory. Some Native Alaskan officials view Arctic drilling as not just a matter of economic opportunity but an expression of sovereignty: Native Alaskans should be free to pursue such development and to accept its potential consequences, they maintain.

Harry K. Brower Jr., Iñupiaq mayor of Alaska's North Slope Borough, for example, has lambasted the idea of faraway climate activists and banks controlling Arctic development. Last January, he wrote that Goldman Sachs' refusal to fund Arctic oil and gas reflected a "subtly racist attitude that too often has been the hallmark of the way Westerners deal with Indigenous people."

Kara Moriarty, president of the Alaska Oil and Gas Association (AOGA), said she believes that Mayor Brower's viewpoint "represents the true majority of people who live on the North Slope." She said that banks divesting from Arctic oil and gas projects in Alaska continue to invest in similar projects elsewhere, potentially with less stringent environmental requirements.

Moriarty said she can't see how "racial justice has anything to do with whether responsibly drilling in the Arctic is a good decision or not," adding that at AOGA, "we don't discriminate in our hiring practices" and calling the economic opportunity offered by the industry unparalleled.

Many climate and Indigenous activists, however, see this as hypocritical, and point out that the same development that proponents claim supports Native communities also degrades the communities' land and health.

At bottom, the different views seem to reflect two competing definitions of racial discrimination, one that focuses on who receives the immediate economic benefits of fossil fuels, and another that focuses on who bears the long-term brunt of the greenhouse gas emissions they produce.

Under either definition, Bernadette Demientieff said, she doesn't think the economic benefits of fossil fuels outweigh their costs. Demientieff, a woman of mixed Alaska Native and Black ancestry, is the executive director of the Gwich'in Steering Committee, a tribal non-profit group, formed by elders and chiefs of the Gwich'in Nation in 1988, which fights to protect the porcupine caribou herd, the Arctic Refuge and the Gwich'in way of life. She called the economic benefits touted by oil advocates "short-term," and said she would "rather have a healthy environment" in the long run.

"Our way of life is not for sale," said Demientieff.

Defining a Free and Fair Choice

Both industry advocates and climate activists cite the historical disempowerment of Native Alaskan communities to back up their arguments.

Terry Anderson, a senior fellow at the Hoover Institution at Stanford University and a pioneer of the term "free market environmentalism," has long advocated for "unlocking the wealth of Indian Nations" by increasing their autonomy over their land and its development.

Many Native American communities "are at the mercy of politics in Washington" because they are restricted by federal Indian law, which inhibits them from exercising the sovereignty needed to develop their "natural wealth," Anderson said, adding that, for that reason, he considers this body of law "the worst [form of] discrimination against Native Americans."

Such discrimination has led to a conception of dirty energy development as the only real path to prosperity for Indigenous communities.

Kyle Whyte, a philosophy and community sustainability professor at Michigan State University and an enrolled member of the Citizen Potawatomi Nation, criticized what he called "surface level accusations" that restrictions on tribal corporations' ability to develop extractive industries were racist. From his point of view, he said, such accusations fall short, "without addressing all the other racism that's happening that makes it harder for tribes to make free choices about what types of economies they choose."

Whyte said such racism includes a long history of U.S. policies meant to create more opportunities for fossil fuel extraction, which may have led some Native communities to feel limited in achieving the more diverse energy portfolios that many of these communities desire.

People who assume that tribes would necessarily extract and develop fossil fuel resources if they faced fewer legal and policy restrictions, Whyte said, often fail to ask, "If tribes could freely pursue any economic options that they wanted, would they necessarily choose that?"

Given a lack of energy alternatives, Whyte questioned whether the embrace by some Indigenous leaders of extractive industries reflected a meaningful expression of Alaska Natives' free will. "To suggest that tribal self-determination only comes down to extract or not extract," he said, "is really to misunderstand what it means to genuinely have freedom" and to erase history.

In Maupin's experience, Alaska Natives who express a desire for clean energy alternatives may also face resistance. Maupin, who uses they/them pronouns, compared raising the issue of renewable energy development on Alaska's North Slope to "talking about communism in the '50s." They were told that renewables like wind and solar were "a waste of time and money" which risked sending Alaska Natives "back to Third World conditions."

With Native American lands holding "$1.5 trillion in untapped coal, oil and other energy resources," their development may have global implications. In the Arctic, which is warming at roughly twice the average rate of the rest of the planet, emissions from oil and gas drilling contribute to climate change, which has a disproportionate impact on poor people of color worldwide.

Maupin doesn't believe Native Alaskans have the right to prioritize local economic development over other people's "basic right to a livable earth." To do so, Maupin said, would betray Iñupiat values.

With a national spotlight on racial justice, Maupin said, they see a greater opportunity to push for a "just transition" from fossil fuels to a clean energy economy, offering hope for a future where Alaska Native communities remain intact.

Otherwise, Maupin said, they fear that continued fossil fuel development will deprive their two young children of developing a "relationship with the land [their] ancestors have been on for thousands of years"—land where they could "practice their traditions"—and for which "there is no replacement."

Moriarity agreed with Maupin on the importance of making "Alaska sustainable for the long term for future generations to come." But she stressed the need to balance "protecting the land that we all live on" with the need for economic opportunity.

Anderson, of the Hoover Institute, said the question of natural resource development in Native communities should arise only if those communities wanted it. But if they did want it, as some do in Alaska, he said, people must ask, "Is it worth putting Alaska Natives in this case in a situation where they aren't able to develop their wealth?"

[Ilana Cohen is an Associate Managing Editor of the Harvard Political Review, for which she has written and edited numerous pieces on climate and environmental issues. As a freelance journalist, Cohen has contributed to The Nation, The Guardian, The New York Daily News, WBUR, and the Gotham Gazette, among others. She can be reached at ilana.cohen@insideclimatenews.org and on Twitter at @ilanabana.]