Living and Working in the Time of the Pandemic in Pakistan

People in Pakistan desperately hope and long for a return to normality, but as the writer Arundhati Roy already noted: nothing could be worse than a return to the normality because that normality was unjust to its core. 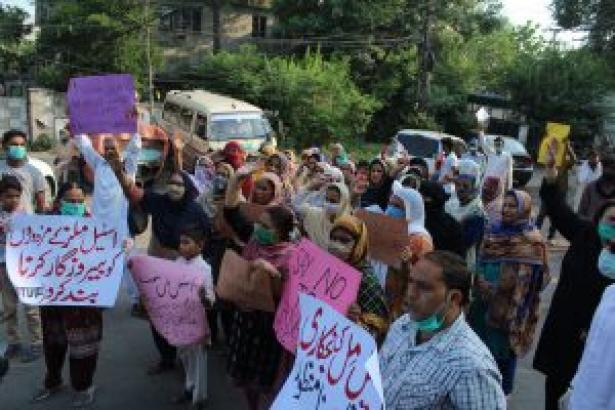 Pandemic, in its essence, might be a global health crisis but its repercussions vary locally. The novel coronavirus has altered our sense of normality and exposed the structural economic and social inequalities of the world in unimaginable yet horrific ways. While some are enjoying the privileges of social distancing, self-isolating and working from home, a majority of us is left to choose between starvation or exposure to the deadly virus.

For a developing country like Pakistan, its economy trampled with foreign debts, an unemployed youth bulge hovering over its head and an already overburdened healthcare, a global pandemic is likely to wreak havoc on its people. By 2019, Pakistan has 24.5% of its 220 million population living below the poverty line. It is feared that the pandemic may push millions more towards extreme poverty soaring the poverty rate to as high as 33.7% in case of low-impact scenario while 58.6% in case of high-impact scenario. Extensive lockdown resulting in closure of industries and businesses have enormously affected the labor as Pakistan witnessed massive layoffs causing job disruptions for around 21 million workers.

Among the non-essential businesses that were shut down as a measure to stem the spread of COVID-19 or coronavirus, the most significant was the textile and garment industry as it employs the 45% of the total industrial workforce in the country. Most of the laborers were fired permanently while some were told that they are temporarily suspended and their wages were withheld.  Layoff was further exacerbated by the disruption in global supply chains with global clothing brands cancelling orders even for the products that had been produced. The real problem, however, remains the government’s failure to enforce labor laws and provide adequate legal protections to workers. According to the National Trade Union Federation (NTUF), 80 percent of the garment factories are not registered. Around 85% workers in these factories are usually hired indirectly through contractors without any written appointment letters which deprive them of their constitutional safeguards as they are not registered with provincial social security institutions. Moreover, on the top of unfair wages, many workers do not get paid sick leave, social security, health insurance or job protection, leaving them particularly vulnerable during any shutdown.

The pandemic-induced economic shutdown also disproportionately affects women workers, especially home-based workers and domestic workers who usually remain invisible within the system: “informal economy”. As soon as the lockdown was announced, the majority of the domestic workers were laid off and asked to leave the household of their employers, often without wages. Many of them were migrant from far off villages who are now forced to plead for charity on the streets to survive. On the other hand, home-based workers are usually kept in the economic loop through a middle-man who provides them with work from the industries. With the shutdown of industries and transportation, this link between home-based women workers and factories broke off as intermediaries cannot reach them. The situation for women factory workers is also not much better. Only four percent are unionized and 93 percent are receiving less than minimum wage. Approximately 26% of them were laid off by the end of April, and many more are likely to lose their livelihood because of the shutdown.

The Pakistani government has sought to strengthen the social security program by creating a labor relief fund to support the daily wagers and unemployed, but these programs remain out of reach for most of the workers. For instance, of the 26% women workers who lost their jobs, more than three-quarter of them (78 percent) weren’t aware if they were registered with any social security organization.

After a seven weeks-long shutdown, the government had allowed many sectors of the economy to reopen e.g. textile, construction, fertilizers, chemical industries and small businesses etc. with the condition that all health and safety SOPs directed by the World Health Organization are met. Labor activists and experts fear that the capitalists are taking advantage of this unfortunate situation by negotiating new terms with the government around the contractual rights and obligations. For instance, as manufacturing resumes, only a small fraction of workers might be hired back since global supply chains have been disrupted, these workers will likely be forced to accept lower wages, longer hours, and without any proper overtime. With 80% of the factories unregistered, there is a huge compromise on safety as it leaves little possibility for the government to monitor health and safety conditions, putting the lives of these wretched of the earth at risk.

Just two weeks after the lockdown was lifted, Pakistan Steel Mills sacked more than nine thousand workers as an attempt to mitigate the financial losses and to privatize in the amidst of the pandemic. Workers staged protests, two of them collapsed and died while protesting in a larger effort to get jobs back. The government appears to pay little attention to the woes of thousands of families who lost their livelihoods.

The agriculture sector, nearly 43% of Pakistan’s total workforce, is also collapsing under the socio-economic impacts of the novel coronavirus. The harvest crisis generated by the pandemic has destroyed many small-scale farmers. Millions of farmers who have already been battling the devastating impacts of climate change and recent locusts attacks, are now left to watch their hard earned produce rot in the fields because of acute labor shortage from the general lockdown.

Finally, restrictions on global trades due to the pandemic will not only affect the major agricultural exports of the country (e.g. rice, wheat, cotton, mangoes etc.) but also put stress on the farmers particularly through excessive hurdles in agricultural imports like seeds, pesticides and fertilizers. It is likely that this industry will exploit the situation by increasing commodity prices. The lack of a well-thought out and clear strategy by the government to minimize the impacts of pandemic on agriculture has rendered millions of farm laborers jobless and pushed the already impoverished small-scale farmers into extreme precarities.

For now, the COVID-19 curve is finally flattening in Pakistan, but a grave concern has emerged as Eid-ul-adha is only a few weeks away. Cattle markets that are annually set around city peripheries could become a potential place for another and more severe outbreak of the virus. So far, no system has been put in place by governing bodies to facilitate the selling and buying of sacrificial animals online. Countless families will suffer financially if the cattle markets are banned, but allowing them could lead to a catastrophic public health disaster.

Struck by massive unemployment amidst a deadly health crisis, people in Pakistan desperately hope and long for a return to normality, but as the writer Arundhati Roy already noted: nothing could be worse than a return to the normality because that normality was unjust to its core, and we so must imagine a new world free of hatred and avarice: a world where universal healthcare, universal income and protection of labor rights don’t sound alien to our ears.

Maria Arshad is a journalist who graduated from Government College University(GCU), Lahore. A grass-root activist, Maria is actively campaigning against the exploitation of students, women and laborers as a class. She co-founded the Progressive Students Collective and the Women’s Collective, and also worked with rights based organizations such as the Shirkat Gah and Digital Rights Foundation.