The Lee statue attracted neo-Confederates, neo-Nazis, white nationalist militias, and other hate groups that converged to defend white supremacy in August 2017 in Charlottesville and is where Heather Heyer lost her life. 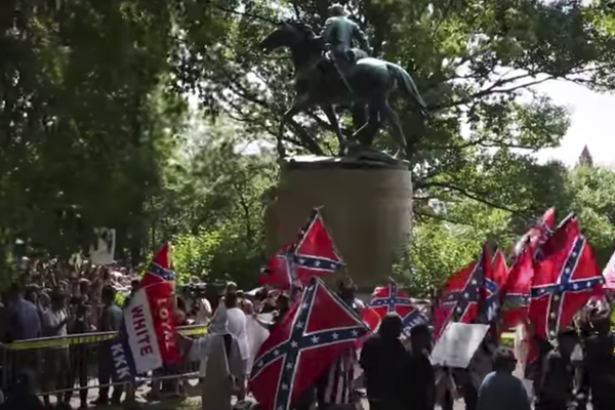 I passed the statue of Robert E. Lee in Charlottesville, Virginia literally hundreds of times, often admiring the handsome appearance of a general who was proud in defeat, leaving the battlefield with honor intact. The bronze Lee sits ramrod straight in the saddle of his warhorse Traveller, hat clutched in his right hand, atop a sturdy gray stone pillar. In all seasons, whether sprinkled with snow or glowing in a fall sunset, it seldom occurred to me—whose ancestors wore blue and gray—that this statue was a symbol of white supremacy. That’s not because the message was hidden. It was because I was unaware of my own white privilege, which permitted me to view it in terms other than as a potent symbol of white over Black.

But white supremacy is exactly the message that the Lee statue embodied. It was the reason it was built in the 1920s. It wasn’t for the general himself, who led tens of thousands of armed rebels against U.S. forces, wounding and killing American soldiers and re-enslaving Black refugees from bondage. Lee had died over five decades earlier, and he didn’t need another statue. By the early twentieth century, Confederate statuary was a growth industry, with Lee at the center. Charlottesville city boosters commissioned it among several such memorials, and it was unveiled in 1924 to the applause of the Sons of Confederate Veterans and other adherents of the Lost Cause. The president of the University of Virginia dedicated it in the presence of members of several Confederate organizations.

Few Black Virginians voted that year, either for Calvin Coolidge or his segregationist Democratic opponent, who won Virginia’s electoral votes. The commonwealth made sure of it, passing the 1924 Racial Integrity Act to harden the state’s color line. The University of Virginia would not admit Black students for another quarter century. State schools, hospitals, and cemeteries were segregated. African American southerners were fleeing to cities like Newark and Philadelphia, where at least there was a hope of upward mobility. But Lee’s likeness gave the violence of Jim Crow a veneer of respectability and a nostalgic atmosphere.

The Lee statue was a quiet sequel to an adjacent statue of Thomas “Stonewall” Jackson, dedicated in 1921 in Charlottesville to the applause of 5,000 pro-Confederate supporters, many uniformed, in sight of a massive Southern Cross, the Confederate battle flag. The Jackson monument was also a bronze equestrian statue depicting the general steeling himself for battle. He was killed in 1863 and never saw the defeat of the Confederacy for which he gave the last full measure of his devotion.

Had the Confederacy won, 4 million Black Americans would have remained enslaved.

Adding injury to insult, the memorial to Jackson and the Lost Cause was built on the grave of a Black neighborhood, McKee Row, which the city seized through eminent domain and demolished, making room for a symbol of white supremacism that was unambiguous to Black residents. The Lee statue stood near Vinegar Hill, a historically Black neighborhood, which the city demolished as part of urban renewal. Vinegar Hill fell so that white city residents could enjoy a downtown mall, pushing its Black residents to the margins, while relying on them to clean the buildings, tend the children, and cook and serve the food that made the living easier for many white residents.

The statues kept that racial order front and center, and it is worth remembering that statues are not history. They are historical interpretations reflecting the values, assumptions, and interpretations of their times. History books of the 1920s generally argued that slavery benefitted Black people and Reconstruction was a Yankee plot to punish the white South, fastening African American rule on a prostrate people who were gracious in defeat. It was a rallying cry against Black equality.

The Lee statue attracted neo-Confederates, neo-Nazis, white nationalist militias, and other hate groups that converged to defend white supremacy in August 2017. It was the same statue that Heather Heyer lost her life over on the city’s downtown mall.

Should such statues come down?

New Orleans mayor Mitch Landrieu perhaps said it best in a 2017 speech arguing for the removal of that city’s Confederate monuments. Landrieu recounted the road he’d traveled to the decision and his talk with an African American father of a daughter through whom he framed the argument.  “Can you look into the eyes of this young girl and convince her that Robert E. Lee is there to encourage her? Do you think that she feels inspired and hopeful by that story? Do these monuments help her see her future with limitless potential?”

Landrieu didn’t have to fill in the blanks. “When you look into this child’s eyes is the moment when the searing truth comes into focus,” he concluded. The statues came down.

The wave of iconoclasm in the United States in 2020 seems to look past the nuance of each statue, viewing any stone or bronze figure with a history of racism to be a fair target. Statues of Christopher Columbus, Junípero Serra, and Juan de Oñate came down based on a history of enslaving, torturing, killing, and expropriating land and sacred spaces of indigenous Americans. Philip Schuyler—who the heck was Philip Schuyler (Alexander Hamilton’s father in law and one of New York’s biggest enslavers)? Civil disobedience is jarring. Disorderly property destruction can be downright frightening.

After a mob hauled down a bronze equestrian statue of King George III in New York City in July, 1776, General George Washington wrote that those who cut off the king’s head and melted the metal for bullets acted with “Zeal in the public cause; yet it has so much the appearance of riot and want of order, in the Army, that [Washington] disapproves the manner, and directs that in future these things shall be avoided by the Soldiery, and left to be executed by proper authority.”

Washington condemned it as the wrong execution of the right idea. And in an irony of history, George Washington himself has become as King George—a target for protest and removal. The Washington that led American forces to victory against the British in defense of “all men are created equal” was also the owner of over 100 enslaved people of African descent, the same leader who signed the 1793 Fugitive Slave Actauthorizing deputized agents to cross state lines and kidnap Black people who had no right to defend themselves in court. The same Washington who pursued his own fugitive bondswoman, Ona Judge, who spent decades evading the Washingtons’ property claims to her body.

But it’s worth noting that over 90 percent of the recent removals were directed by mayors, governors, and other elected officials and assemblies, responding to citizens’ calls for them, and often replacing them with other memorials.

And the tone of the protests or the way in which some statues are defaced brings out another aspect of white privilege. That is, some initially sympathetic observers are uncomfortable with who gets to oversee and control the process. This is not to excuse wanton destruction. The Atlantic’s Adam Serwer tweeted that those who sought to bring down a statue of Ulysses S. Grant “probably just want to break things.” There is that, but where on the social balance sheet do we register the insult of a century and a half of white supremacy set up in America’s town squares and green spaces?

The protests over the murders of Ahmaud Arbery, George Floyd, Breonna Taylor, and so many others are infused with a damning critique of structural racism—which is not so much a set of persistent attitudes as institutional practices. A century and a half after Lee’s defeat on the battlefield, the typical Black family owns 1/10th the wealth of the typical white family, and that wealth gap is widening into a chasm. Black workers’ earnings are diminishing compared to whites fifty years after Civil Rights, and taken as a whole, African Americans have returned to the same income gap versus whites as in 1950, when Harry S. Truman was president, before Brown v. Board of Education, and before the University of Virginia admitted a single Black student. Was that incidental or an intentional part of Robert E. Lee’s legacy, if not Washington’s?  The Covid-19 crisis has put Black and Latinx workers on the front lines as essential workers, delivering healthcare and meals, yet most are underpaid, have little job security, and risk bringing the virus home to children and seniors. Black people account for nearly a third of coronavirus cases and 40 percent of the deaths. How is that sacrifice to be memorialized?

Should the statues remain up, doing the quiet work of reinforcing white supremacy while we get to work dismantling the interlocking components of structural racism? Or are the statues part of a 400-year history of violence against African-descended people that needs urgent attention and rectification? In what direction do the statues and monuments point us?

Calvin Schermerhorn is Professor of History at Arizona State University and will be a 2021 Fulbright Scholar at the University of Nottingham (UK). He is the author of Unrequited Toil: A History of United States Slavery, The Business of Slavery and the Rise of American Capitalism, 1815-1860, and Money over Mastery, Family over Freedom: Slavery in the Antebellum Upper South.