The Department of Homeland Security: The Ideal Authoritarian Tool

The threat to American governance in an election year is dire. There is an authoritarian president in the White House with no respect for the rule of law and toadying and unconfirmed loyalists at the top of the DHS. 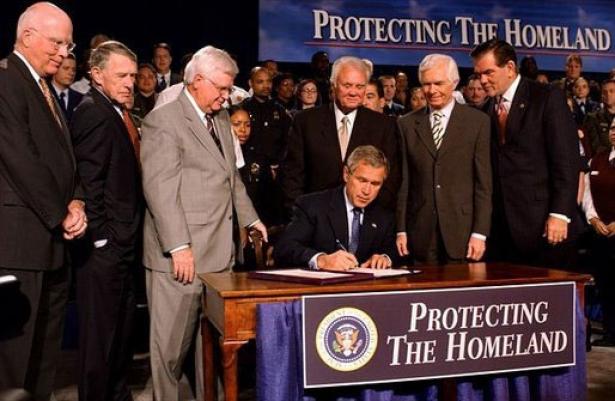 In the wake of 9/11, the Bush administration made a series of blunders that have created havoc in U.S. governance.  The invasion of Iraq in 2003 was the worst of these decisions, but not far behind was the creation of the Department of Homeland Security (DHS).  The DHS has turned out to be the perfect authoritarian tool in the hands of a corrupt administration, and there is ample evidence of the department’s role in degrading public life in America in the past several weeks.  The department has become Trump’s tool for targeting “anti-fascists,” the label that he has broadly applied to all protestors.

The DHS is a bureaucratic monstrosity that includes the Coast Guard, the Federal Emergency Management Agency, the Immigration and Customs Enforcement Agency (ICE), and various unrelated departments.  It has over 240,000 employees, a $50 billion budget, and a reputation for excessive waste and ineffectiveness.  It is the third largest government agency, and its 60,000 law enforcement officers represent half of all federal law enforcement agents in the government.  DHS has too many subdivisions, operates in too many disparate fields, and lacks proper congressional oversight.  The creation of DHS meant that immigration enforcement and border protection were moved from the Departments of Treasury and Justice, respectively, and were then treated as national security issues.  Under Trump, demonstrators, dissidents, and protestors have become national security issues.

It took Hurricane Katrina in 2005 to teach us what a mess had been created at DHS.  Several years later, the office of U.S. Customs and Border Protection acknowledged that it “does open mail to U.S. citizens that originate from foreign countries whenever it’s deemed necessary.”  In 2012, a Senate Homeland Security report concluded that DHS intelligence was “irrelevant, useless, or inappropriate.” In 2017, a border patrol agent was investigated for obtaining confidential travel records of a Washington journalist and using them to press for her sources.

Events in Portland, Oregon have illuminated the DHS threat to governance and civil rights as the Federal Protective Service (FPS) has operated without any consultation, let alone permission, from state or local authorities.  The FPS  deployed its unidentified agents in camouflage uniforms without identifying insignia, used so-called “nonlethal” projectiles and tear gas against American citizens, and forced demonstrators into unmarked rental cars to be held in federal buildings without charges.  DHS agents were involved in the separation of children from their parents at the southern border, and agents from U.S. Immigration and Customs Enforcement and the Customs and Border Protection (CBP) have been labeled as “RoboCops” for their aggressive measures against immigrants.  A CBP drone monitored the protest activities in Minneapolis following the murder of George Floyd.

Over the past week, the DHS Office of Intelligence and Analysis (I&A) disseminated reports to various law enforcement agencies that summarized tweets by a reporter for the New York Times and the editor of the blog Lawfare.  The journalists had posted leaked DHS documents that revealed shortcomings in the department’s aggressive handling of events in Portland. According to the Washington Post, the DHS also tracked the communications of demonstrators, another violation of the First Amendment.  The acting director of DHS, Chad Wolf, immediately acknowledged the threat to the First Amendment, stopped the illegal activities of the office, and removed its director, Brian Murphy, but this was simply an act of damage limitation. Murphy, a former FBI agent, had a reputation for misapplying the authorities of I&A, and ignoring their intelligence assessments. In any event, the overall problems of DHS remain.

The illegal creation of dossiers on journalists is reminiscent of the unconstitutional activities of the intelligence community in the 1960s and 1970s during the Vietnam War.  The congressional investigations of the mid-1970s and the excellent reporting of Seymour Hersh exposed the illegal domestic spying operations of the Central Intelligence Agency, the Federal Bureau of Investigation, and the National Security Agency to disrupt the anti-war movement.  The FBI’s counterintelligence program (COINTELPRO) actively disrupted lawful activities of numerous individuals and organizations, including Martin Luther King Jr.  FBI director J. Edgar Hoover’s designation of the Black Panther Party as the “greatest threat to the internal security of the country” is reminiscent of Trump’s identification of “antifa” as a similar threat. (At least, there was a Black Panther Party; there is no “antifa” party.) The dossiers on political dissidents is reminiscent of DHS’ collection against U.S. journalists.

Just as the FBI’s COINTELPRO and CIA’s Operation Chaos hurt the reputation of these agencies, the actions of DHS on behalf of Donald Trump are drawing criticism from former Republican directors of the agency.  The first director of DHS, Tom Ridge, the former governor of Pennsylvania, stated that it would be a “cold day in hell before I would consent to an uninvited intervention into one of my cities.”  Former director Michael Chertoff pointed out that DHS is much too willing to carry out the president’s support for brutal and aggressive force, “especially in cities…governed by liberal Democratic mayors.”

The threat to American governance in an election year is dire.  There is an authoritarian president in the White House with no respect for the rule of law; a strong advocate for presidential power in William Barr as Attorney General; toadying and unconfirmed loyalists at the top of the Department of Homeland Security; and a Republican-led Senate that will offer no criticism of the outrageous actions of the president.  We know little about Barr’s Operation Legend, which is using agents from the FBI, the U.S. Marshals Service, the Drug Enforcement Administration, and the Bureau of Alcohol, Tobacco, Firearms and Explosives to prevent peaceful demonstrations.

At least, Secretary of Defense Mark Esper and chairman of the Joint Chiefs of Staff Mark Milley expressed regret for being present when federal police officers violently cleared Lafayette Square to enable Trump’s blasphemous display of power at the St. John’s Episcopal Church in June.  Chad Wolf, however, has been a willing tool of the White House, parroting the line about “violent antifa anarchists,” and blocking the Supreme Court’s order to restore protections and benefits to dreamers in the Deferred Action for Childhood Arrivals  (DACA).

Barr and Wolf are enablers of the president’s excesses, and It is long past time for them to acknowledge the misuse of the DoJ and the DHS, respectively, on behalf of Trump’s reelection campaign.  It is also time for the Congress to conduct the kind of  oversight that exposed the illegal and unconstitutional activities of the intelligence community during the Vietnam War.  The city of Portland must not become a petri dish for studying the death of democracy.

Melvin A. Goodman is a senior fellow at the Center for International Policy and a professor of government at Johns Hopkins University.  A former CIA analyst, Goodman is the author of Failure of Intelligence: The Decline and Fall of the CIA and National Insecurity: The Cost of American Militarism. and A Whistleblower at the CIA. His most recent book is “American Carnage: The Wars of Donald Trump” (Opus Publishing), and he is the author of the forthcoming “The Dangerous National Security State” (2020).” Goodman is the national security columnist for counterpunch.org.