Union membership in the UK hit a historic low (23%) a few years ago. The pandemic has reminded many workers that the unions are their protective shield in a situation where employers were ordering them back to work in unsafe circumstances. 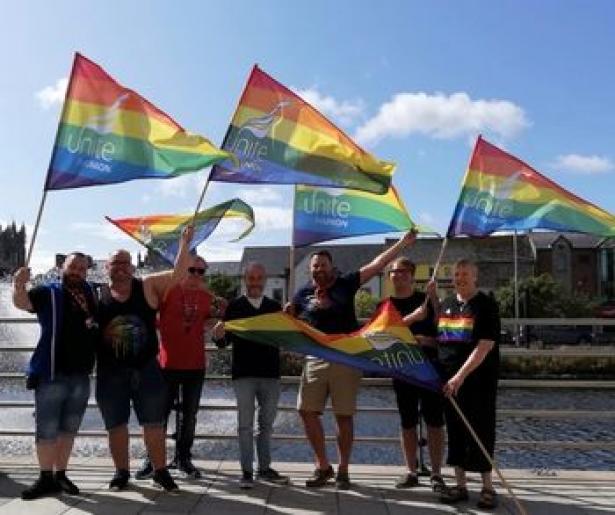 UNITE LGBT+ Committee at the Britisn and Irish Price Parade, 2019,

After the death of my colleague and friend, I became the main trade union representative at my workplace, a small charity helping disabled people in Lambeth (London). As many other union activists across Europe, I am now involved in the struggle of workers to a safe workplace ...

In the UK, charities like mine are essential for disabled people. We help them access social security benefits, exercise and engage in sport, and employ their own support staff for social care. My colleague and friend Sean had been the main union representative and I was the equalities representative, which meant I often assisted him with trade union duties. We were both members of UNITE, the largest trade union in the UK. Now that the union’s equalities side has now been reformed people who sit on one of the equalities committees (Black and Ethnic Minority, Women’s, LGBT+ and Disability) also have a seat with a vote on the industrial committee for the sector in which they work. So having a seat on the union’s regional LGBT+ Committee for the London and Eastern region, I also have a seat on the not-for-profit committee representing those who work in the voluntary sector in the region.

…in at the deep end

Shortly afterwards, Sean died of a heart attack. I was absolutely shocked and we lost both a friend and an experienced and influential trade union representative. I called a meeting of our members in our workplace and agreed to take on the role of representing us. It was clear to me that at some point our employer would ask us to return to the office and that it was essential that I learned as much as I could, and quickly, about health and safety and how to make our workplace safe. In this situation, webinars became an essential way of passing information and discussing topical issues. So at the height of the pandemic I started attending webinars organised by the national Trades Union Congress (TUC) and also by UNITE and reading the health and safety guidelines which the union sent out to all workplaces. All of this was a new area for me. In many workplaces the unions have a health and safety representatives – but not at mine, since it is a very small workplace.

The unions’ webinars meant even more for me than a way to communicate vital information; I also got to know representatives from other unions, in particular from the teachers union and the union for transport workers. Both unions represented workers potentially on the front line, and indeed it later emerged that many transport workers had died from the virus. The teachers’ union was being pushed by the government, supported by the right-wing press, to open schools immediately in May and allow children to return to school. The head teachers had been supporting reopening, whereas the teachers’ union had major concerns about the health and safety of its staff and were keen to find out what their legal rights were. They also reported at the webinar that there had been a large increase in union membership, and this has been the case across many unions.

Union membership in the UK hit a historic low (23%) a few years ago, but the pandemic has had the effect of reminding many workers that the unions are their protective shield in a situation where many employers were not providing their workers with protective equipment or ordering them back to work in unsafe circumstances.

In this difficult situation, I called a meeting of my members at work, and we all agreed that our employer would have to completely comply with health and safety regulations. The full-time union official also attended to explain to us what the union’s view on the virus was. The bottom line, he pointed out, was that the union did not believe that anyone should return to work unless it was absolutely essential. This we all agreed was our position.

At this point the government’s line was that people should work from home where possible and that they should avoid public transport if at all possible. It was clear that the UK government was losing control of the virus as the infection rates climbed and the death rate with it. It became obvious that the UK had the highest death rate in Europe and even higher than in the USAwith the unofficial figures for deaths at 65,000 (British Office for National Statistics, extra deaths above average seasonal deaths) and the official one hovering around 40,000.

Gradually the government from early June began to open up non-essential shops and crucially changed the strapline for the government press briefings from ‘Stay at Home, Stay Safe’ to the really confusing ‘Stay Alert, Stay Safe!’ This was a clear signal that the economic impact of the pandemic was causing major headaches for the government and that there would now be more emphasis on people not staying at home. For me as a person who was in a high risk group and sheltering this would make no difference whatsoever, but it was also a signal to the unions that they might find themselves in more potential conflict situations with employers over return to work.

Safe return to the workplace

Firstly, it was clear that many charities were in very serious financial trouble and that they had wanted to make many staff redundant. However, UNITE had managed to persuade many of them through lobbying and negotiations to keep staff on and be paid by the government’s furlough scheme, which covered the cost of workers employed by organisations no longer in a position to pay them. This scheme, which continued initially until July but was then extended to October was designed to encourage employers to keep staff on until the economic situation had stabilised and they could return to work. However, as the economic impact of the pandemic has worsened it is clear that many of these employees will not have jobs to return to and will be made redundant in October.

However, what also emerged from the meeting was that for some charities, such as mine, which were quite small, making their workplaces Covid-secure would amount to a huge challenge as many of the spaces were old and cramped and very difficult to adapt to social distancing, etc. This has become one of the major issues for me in the negotiations with my employer.

The ‘building’s risk assessment’ would be key as all workers need to access the main reception area, the lift and stairs areas, and finally the rooms on the ground floor. I was aware that the building was already open for a very limited number of hours each day and that the employees of some other organisations were running a limited service from their offices. I made a request to see the draft risk assessment for the building. The understanding was that I would relay my comments to the director who would then incorporate those comments (or not) into the draft document and return it to the company running the building.

When I received the draft I could see that in general terms there was a desire to protect both staff and clients. Still, it was full of holes and some of them alarmed me. There was, for example, no mention of face masks for those visiting the building, safe-distancing was mentioned but there was no definition of what that distance should be. The most concerning for me was a proposal that employees would meet clients in two rooms on the ground floor, neither of which had any ventilation whatsoever. This rang alarm bells for me and I asked that these rooms be ventilated after each visit and thoroughly disinfected. The owner of the building would need to ,make changes to the rooms in question.

The other issue that the union had impressed on me was that although the government had watered down the original social distancing advice to keep 2 metres apart, the new government guidelines were much more vague at 1 metre with face mask if it was impossible to maintain a distance of 2 and the union still held the view that 2 metres was the safe distance.

I am also concerned about the ‘individual risk assessments’ drawn up by the employer and based on a worker’s level of exposure to danger. These will range from health and disabilities that could put the employee at risk to the amount of time which they will have to spend on public transport if they do need to use it. Although using public transport to go to work might not fall within the employer’s remit it is a significant factor in affecting the health of an employee. Apart from myself, belonging to a high risk group as I do, another member is living with an elderly parent who is sheltering and others would have a long commute by the Underground about which many people feel distinctly nervous.

The Johnson government, in an attempt to force people back to work, has just dropped its earlier advice against using public transport and has encouraged people to return to work if possible and to use public transport. Ironically this advice was issued a day after the government’s Chief Scientific Adviser told a parliamentary committee that if possible people should continue to work from home and that he regarded this as the safest alternative. However, for some employers, this change in the government’s position will encourage them to try and force office workers to return to work.

The situation in the UK continues to worsen. The Chief Scientific Adviser is predicting a very difficult winter with waves of the virus. The government’s trace and Covid test system, which has been outsourced to companies close to the Prime Minister’s Chief Advisor, is considered a joke and has been widely criticised by medical experts who warn that thousands of infections are going untraced and untested.

In the middle of this grim period with real fears about how the health system is going to cope and the prospect of millions unemployed by October, I am fighting to protect both the jobs and the health of my trade union members. I remain positive that with sufficient pressure and organisation I can ensure that all of my members in my workplace will return to work safely, but we will only return when that workplace is 100% Covid secure. Many workers now realise that the trade unions are their main shield in this crisis. At a micro level I am contributing to the struggle of trade unions and trade unionists against a system whose only rationale is profit and in which the health and safety of workers comes a poor second. I see myself as one of a legion of union activists across Europe who are involved in this struggle for the rights of workers to a safe workplace. This is the first chapter in a new history of trade union struggle.

Joseph Healy is a member of Left Unity in Britain