food The life-changing magic of cookbooks

Recently, the boundaries of what a cookbook is or should be are changing, including cookbooks as a form of resistance. 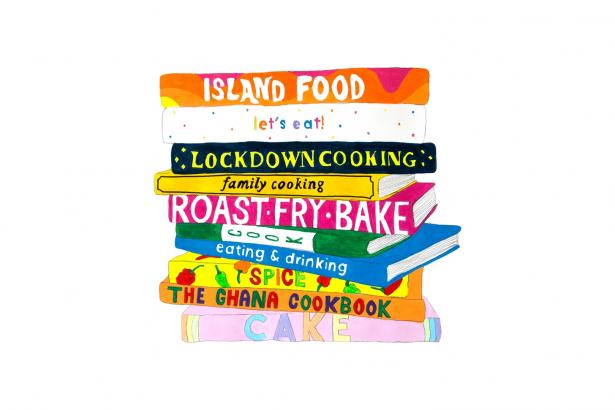 Slowly, I was seduced by my cookbooks into enjoying the act of cooking once again., Tihara Smith

At the beginning of lockdown, I wrote long lists of things I wanted to make: takoyaki, kouign amann, braided challah and hand-pulled noodles. It didn’t take long before the realities of homeschooling collided with cooking, which felt like 290 meals (plus snacks) a week, and my lists looked at me mockingly. “Ha, you thought you would have time for non-essential cooking,” they seemed to say. There were other reasons why the last thing on my mind was cooking. To live in this time as a black person is to live in terror, both of the virus we can’t see that disproportionately affects us, and of the other virus which is all too visible right now: the systemic racism in every sphere of our existence. Yet I knew I was privileged to have food and, unlike some, I do not have to worry about keeping a roof over my head. Slowly, I was seduced by my cookbooks into enjoying the act of cooking once again.

For many people, cookbooks are a way to learn about history and culture, or a person. Sometimes they are a path to armchair travel, or a deep dive into a single subject or cuisine. For some, it is simply a teaching manual, while for others a work of art to be admired or aspired to. I have cookbooks that fit into each of these categories and some that refuse to fit into any. A good cookbook is one that engages me; I don’t have to even cook from it. The mark of a great cookbook is one that I enjoy reading and cooking from.

The food writer Michael Ruhlman once said that the two things that separate humans from other animals are cooking food and telling stories. I remembered this as I read The Art of Escapism Cooking by Mandy Lee, which is the very best example of both. It has weight measurements (yay!) and beautiful prose, and I feel the depths of Mandy’s loneliness as she recounts her self-imposed lockdown following a move to Beijing. I appreciate her rigour in recipe-testing, her obsession and creativity. After I read the book from cover to cover over several days I finally took it into the kitchen. I had decided to make paratha, which I have tried many recipes for, from Serious Eats to Anjum Anand; it is my daughter’s favourite thing to eat. This one is different: it uses hot water dough and I have all the ingredients. My daughter declares it the best paratha I’ve ever made ─ result! My heart feels light for the first time in days and, for that alone, Mandy’s book justified every penny I spent on it.

Like everyone else in the last few months, my friends and relatives have been baking. As the person in my social circle who ‘owns a lot of cookbooks’, I was getting text messages asking for recipes for banana bread, simple loafs, flatbreads. I turned to Dan Lepard’s Short & Sweet to respond to many of these requests. This book has been much used over the years; the recipes are exactly as it says on the cover, uncomplicated and delicious. The only thing I actually made myself during lockdown is soft white baps, to, as he says, give “a sausage a proper home”. I feel connected to my family and friends, even though we are separated, through the recipes I share. This comforts me. My sister and I send dried yeast in the post to our mum. A friend texts to ask which Smitten Kitchen cookbook I would recommend. I rifle through both, reminded of the recipes still bookmarked to try, struggling to choose between them.

On a Monday in June, I learn that a city I used to live in pulled down a statue of a slave trader; some try to defend the statue’s existence. I also learn that the government finished paying for the compensation paid to slave owners in 2015. 2015! I stop doom-scrolling and decide to make an English muffin bread loaf from Shauna Sever’s Midwest Made: Big, Bold Baking from the Heartland, a compilation of baking recipes from the American Midwest.  Baking requires a focus that allows me to lose myself in the actions. No one really needs to bake, so it feels like something just for me; the smell of bread dough is one of my most beloved smells in the world. I have baked more from this book than from any other in the last six months: scone-top blueberry muffins, doughnut loaf, chocolate chip marble bundt cake (the only marble cake I will make forever more). There are many more I would like to try: layered rhubarb cobbler pie, caramel dapple apple cake, white chocolate cream cheese Danish. My only quibble is a lack of non-European recipes, which feels like erasure of Black cooks, but that may be because my current bedtime reading is Jubilee.

Jubilee is a thorough volume by Toni Tipton-Martin with the subtitle “recipes from two centuries of African American cooking”. This cookbook explores African American food by researching almost 400 Black cookbooks from 1827 onwards. Some original recipes are included as well as modern interpretations of the dishes. It is very much a celebration of food, a multifaceted story of what African American food is beyond what has often been flattened as soul food. I am in awe of Ms Tipton-Martin’s scholarship; I learn something new on almost every page. Recipes shouting my name range from gingerbread waffles and cream to salmon croquettes to curried meat pies. There is such promise in cookbooks yet to be used, a palpable excitement to see if they live up to expectation.

In mid June I managed to get hold of some curry leaves, as my son had been pestering me to make curry leaf popcorn chicken from Nik Sharma’s book Season: Big Flavors, Beautiful Food. As I look at the cover, I remember how I scrolled through his blog for hours when I first discovered it. I look at the photographs with his hands now and think how happy I was to see brown hands in a cookbook because it was so rare. I met him once and he was as lovely and gracious as I hoped he would be. I find the brown, fraying menu, from a Honey & Co food talk feast, on the page for turkey hand pies, which I must make again. I often use things like notes and menus as bookmarks so when I open a book I never know what I am going to find; sometimes it is an evocative treasure. I turn to the curry leaf popcorn chicken on today’s menu, I have made it so often I almost know the recipe by rote but my brain is preoccupied with other things and I need it in front of me. We eat greedily, not a single piece is left.

Strangely, another book I have found myself turning to is Nigella Lawson’s Feast. Feasting may seem an odd choice for lockdown meals without those to feast with, but the recipes are easily halved and there is an element of nostalgia and comfort attached to this book. Nigella has been an important part of my culinary education; her recipes were my first successes (pizza and chocolate fudge cake). I love her writing and recipes in equal measure; there are few cookbook authors I can say that about. Feast was the first hardback cookbook I bought, after years of borrowing Nigella’s books from the library as a poor student and spending hours copying the recipes to try. What was missing from these scribblings was Nigella’s head notes, her essays, and without context the recipes lose some of their magic. I am not one of those readers complaining about too much narrative before a recipe. As she says in the introduction to Feast, “Cooking has many functions, and only one of them is about feeding people. How we eat and what we eat lies at the heart of who we are – as individuals, families and communities”. She goes on: “Food isn’t just love, food encompasses everything: it may be only a part of life but in an important way underpins the whole of it”. This is the reminder I need that cooking is an act of love. It helps that Feast contains many favourites of the small humans I live with, like pasta with ham, peas and cream and snow-flecked brownies ─ they hit the spot between sustenance and indulgence.

Recently, the boundaries of what a cookbook is or should be are being stretched by comic cookbooks, Substack newsletters, novel-like cookbooks and cookbooks as a form of resistance. Still there remains so much that isn't represented in writing. I think the key issue is that in many cultures, recipes have been passed on orally. I cook food from the Ghanaian culture I grew up with based only on what I have learnt from watching relatives cook. I have always loved eating but I only started cooking as an adult, and by this time I had moved away from home and my grandmother had passed away. There is so much I feel I could have learnt if there was a written or filmed account of her food and my mum shares this sentiment. It’s not necessarily about having something tangible in my hands but more about traditions and knowledge that get lost as time passes.

Richardson Wright’s The Bed-Book of Eating and Drinking, which I am dipping in and out of, mentions another book: Professed Cookery by Ann Cook. Written in 1760, Mrs Cook, he says, goes for her professional competitor, Mrs Hannah Glasse: “Mrs Cook takes down her hair and simply annihilates Mrs Glasse. She fairly tosses every pot in the kitchen at her.” This makes me want to read this book ─ even in 1760 people were being called out! It also makes me yearn for more written gastronomic history of my culture. The current push for diversity in publishing will hopefully lead to a plethora of voices and new ways of looking at and talking about food.

The question I have been asking myself lately is why do I love cookbooks so much? Why are they important to us? The answer is complicated: what I do know is that I have learnt so much beyond recipes from cookbooks even though the things which have enriched me have rarely been something I actively sought. They are a comfort to me, an escape, and a balm for my soul. Imani Perry, Professor of African American Studies at Princeton said recently: “Living defined by terror is itself destructive of the spirit. Joy was never an evasion of the depths of the wounds, it is literally a sustaining life force”. Anti-blackness is all too real in this time and fighting racism is life-draining. Very little sparks joy in my life, but some cookbooks ignite such a big spark that they practically light a bonfire. Black joy is fleeting; I’ll take mine where I can.

Gemma Croffie is a writer, mum and foodie based in Kent. You can find her on Instagram as @baabalouise and on Twitter as @foodgeekgem. This is her first piece of published food writing.