Labor in the Pandemic South

Like the 1930s, nowhere are the political and economic failures of modern-day American capitalism greater than in the U.S. South, where a monolith of Republican governors and legislatures are completely incapable of dealing with the Covid 19 crisis. 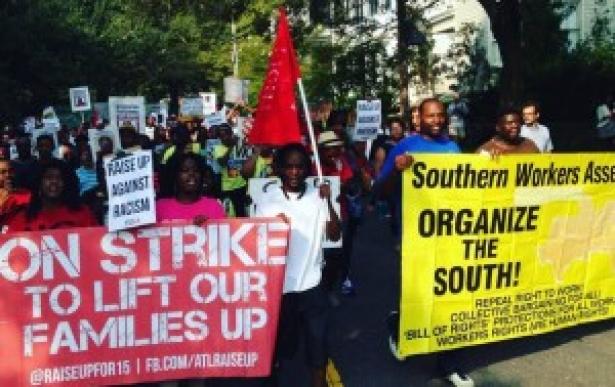 OXFORD, Miss. - Double-digit unemployment, widespread protests in the street, homeless camps spreading across the nation’s cities, governmental ineptitude embodied in Republican intransigence and a compromised Democratic Party, and a clueless president. Such were the early days of the Great Depression, but sadly it’s also reality in America today.

Change came out of all those troubles back in the 1930s. Franklin D. Roosevelt replaced inept Herbert Hoover in the White House would find himself pushed ever farther to the left by the failure of his first New Deal, the rise of populist Huey Long in Louisiana, and the growth of labor unions in what became the greatest social justice movement of that day. FDR came back with a second New Deal in 1935 that created the Works Progress Administration and Social Security. The Wagner Act that same year made unions a guaranteed right.

Much like the situation in the 1930s, nowhere are the political and economic failures of modern-day American capitalism greater than in the U.S. South, where a monolith of Republican governors and legislatures have proven themselves completely incapable of dealing with the Covid-19 pandemic and the accompanying economic collapse. In Mississippi, Republican Gov. Tate Reeves apes his hero, Donald Trump, in insisting on school openings even as coronavirus cases rise exponentially across the state. He even boasted recently of allowing college football to continue despite other college conferences shutting it down.

Back in the 1930s, Southern political leaders, all of them Democrats then, did their best to keep FDR’s social directives at bay when they affected their most prized constituents’ billfolds. They made sure new labor laws asserting union rights didn’t apply to farm workers. They kept civil rights legislation off the books and black Americans the nation’s lowest paid. They worked with textile and other industries to keep the South the nation’s least unionized, and they made sure that the region stayed what Roosevelt called “the nation’s number one economic problem.”

The good news is that signs of a rising labor consciousness in the South are showing up across the region, a topic of discussion at a panel titled “Perspectives on Union Organizing Today” held recently by the United Campus Workers (UCW)/Communications Workers of America (CWA), Local 3565 via Zoom out of Hattiesburg, Mississippi.

I am a member of UCW Local 3565 and served as a panelist, and participants were happy when I told them I was going to tell some good news about labor in the South, something never discussed in history courses, whether in high school or college, and rarely from a political podium.

The UCW itself is part of the “good news” with its work in successfully preventing Tennessee’s Republican governor from privatizing most jobs in the state’s universities in 2017. The union has since seen its membership grow across the region, including not only Mississippi but also Louisiana and Georgia.

Operating under government-sanctioned restrictions on public unions, the UCW is a non-traditional union in that it doesn’t have collective bargaining rights on campuses. However, this allowed it to establish itself without campus-wide elections. “Non-traditional” has been a modus operandi in the growth of labor consciousness across the region.

The Southern Workers Assembly has gained momentum as an activist group working with workers in the meatpacking industry, many of them African American and Latino, and the result has been more than 230 strikes and other job actions in the meatpacking industry in the Carolinas and elsewhere in the six months since the pandemic began.  According to a recent SWA report, “rural communities that have a meatpacking plant have a COVID-19 infection rate that is 5x higher than those without.” The SWA has sponsored a Safe Jobs Save Lives campaign, and it has aligned itself with the Black Lives Matter movement.

Venceremos in Arkansas pushes for the rights of poultry workers

Venceremos in Arkansas is another non-traditional labor organization that champions the rights of the hard-hit workers in northwest Arkansas’ poultry plants. In April Venceremos (“We conquer”), a workers’ justice organization, led a march to the front door of Tyson corporation’s poultry plant in Springdale, Arkansas, to demand better working and safety conditions as well as hazard pay during the pandemic. By June, after getting the Arkansas government’s stamp of approval of its safety conditions, the company reported that 250 of its workers at the plant had tested positive for COVID-19. Soon some 13 percent of the industry’s workers in northwest Arkansas—many of them immigrants from the Marshall Islands--tested positive. The fight is still on with Venceremos leading the charge for workers’ rights.

These organizations bring to mind the successes of older labor rights groups like the Farm Labor Organizing Committee in North Carolina and the Coalition of Immokalee Workers in Florida, both of which forced companies to the bargaining table even though their membership is made up largely of immigrant workers.

Nurses in Asheville, North Carolina, have waged a valiant organizing campaign at HCA Health Care’s Mission Hospital in Asheville, once a proud and locally beloved nonprofit hospital before it was purchased by the nation’s largest hospital corporation in 2019. After many unheard complaints about the decline of service at the facility, four nurses led an effort that now promises to be one of the largest organizing campaigns in the state’s history.

They’ve had to fight $400-per-hour union busters, the courts, and the state’s long anti-union history, but they’re looking strong as an election is underway and ballots to be counted on September 16.
The struggle continues in all of these efforts across the South, but the workers who are part of that struggle put the lie to the old trope that you can’t organize the South. They’re doing it, and they’re gaining ground at a time when the nation as a whole is waking up to the bill of goods its political and business leaders have been selling it for way too long.

Joseph B. Atkins is a veteran writer and professor of journalism at the University of Mississippi. He is the author of Covering for the Bosses: Labor and the Southern Press (University Press of Mississippi, 2008) as well as the novel Casey’s Last Chance (Sartoris Literary Group, 2015). He can be reached at jbatkins3@gmail.com. His blog is http://www.laborsouth.blogspot.com.