"A lack of funding for emergency relief and the complications created by the coronavirus scourge have now pushed some of the world's neediest populations closer to famine conditions." 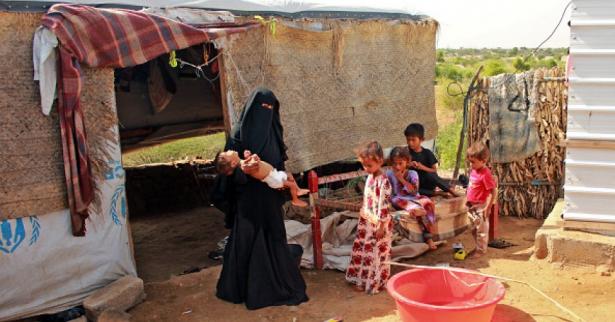 Hashem Mahmoud Atin, a 10-month-old displaced Yemeni child suffering from acute malnutrition and who is unable to reach a hospital for treatment, is held by his mother at a camp in Abs in northern Yemen's Hajjah province on September 3, 2020., (Photo: Essa Ahmed/AFP via Getty Images)

The convergence of socio-environmental "disasters, economic shocks, and public health crises, all compounded by the Covid-19 pandemic," has magnified the risks of famine, "endangering the lives of millions" of people living in Yemen, South Sudan, northeast Nigeria, and the Democratic Republic of the Congo, the United Nations' top humanitarian official warned in a statement obtained by the New York Times over the weekend.

In a letter to members of the U.N. Security Council, Mark Lowcock, under-secretary general for humanitarian affairs and emergency relief coordinator, warned of the looming intensification of malnutrition, starvation, and death in all four areas—encompassing some of the world's most destitute regions, each one further hampered by years of armed conflicts that diminish the ability of humanitarian relief workers to safely distribute aid.

Lowcock's recent letter, which has not yet been made public, fulfills a requirement of a 2018 Security Council resolution to report "the risk of conflict-induced famine and widespread food insecurity"—but in many ways, the impending arrival of what the Times called "the first famines of the coronavirus era" is a catastrophe foretold.

In April, David Beasley, executive director of the U.N. World Food Program (WFP), explained that while the world was confronting the Covid-19 pandemic, "we are also on the brink of a hunger pandemic."

Beasley stressed that "we are not only facing a global health pandemic but also a global humanitarian catastrophe. Millions of civilians living in conflict-scarred nations, including many women and children, face being pushed to the brink of starvation, with the specter of famine a very real and dangerous possibility."

The WFP leader estimated that, due to coronavirus, the number of people on the brink of starvation could nearly double from 135 million to 265 million people by the end of 2020. He warned of a worst-case scenario in which "about three dozen countries" could be contending with famine and pointed out that in 10 countries, there are already "more than one million people per country who are on the verge of starvation."

"There are no famines yet," Beasley said. "But I must warn you that if we don't prepare and act now—to secure access, avoid funding shortfalls and disruptions to trade—we could be facing multiple famines of biblical proportions within a short few months," particularly in countries in Africa as well as the Middle East where many communities were already vulnerable to hunger prior to the pandemic due to a combination of factors such as poverty, armed conflict, and climate change.

Reflecting the conclusions reached in the U.N.'s "Policy Brief on Covid-19 in an Urban World," Ken Crossley, head of cash assistance at the WFP, recommended bolstering cash transfers to support millions of slum-dwellers whose livelihoods were upended by pandemic-induced lockdowns and whose incomes—and with it, capacity to send remittances to family members—have decreased while the risks of acute food insecurity have increased.

The Times characterized the recent letter to the Security Council, wherein Lowcock described how "a lack of funding for emergency relief and the complications created by the coronavirus scourge have now pushed some of the world's neediest populations closer to famine conditions," as an escalation of the WFP warning issued by Beasley in April.

The grim numbers conveyed by U.N. officials and others suggest that not nearly enough has been done between spring and fall to prevent a global humanitarian catastrophe from unfolding.

In Yemen—the poorest country in the Arab region and "ravaged for more than five years by a civil war between Houthi rebels and a Saudi-backed military coalition"—roughly 80% of the country is "dependent on outside aid," the Times reported.

On social media, journalist Sarah Lazare took issue with the Times' omission of U.S. support for Saudi Arabia, which she argued "has been using starvation as a weapon of war."

The International Committee of the Red Cross warned that "two thirds of people in Yemen have almost nothing to eat. That's over 20 million people."

On Twitter, Beasley shared a WFP video explaining why so many Yemenis are reliant on "food assistance to survive," adding that "we cannot let them face this alone."

In the eastern part of the Democratic Republic of Congo, where decades-long conflicts have been exacerbated this year, 21 million people are suffering from "crisis or worse levels of food insecurity," noted the Times. Prisoners in the country are reportedly already dying from hunger.

"More than 10 million people—four of five—now require humanitarian assistance and protection" in northeast Nigeria, the Times added. In his letter to the Security Council, Lowcock said more than 1.2 million in the region "remain largely inaccessible to aid agencies due to conflict and deliberate obstruction by nonstate armed groups."

A recent increase in violence, followed by destructive flash floods, in civil war-torn South Sudan has left more than 1.4 million people to endure "crisis or worse levels of food insecurity," the newspaper continued.

The catastrophic problem is not limited to the areas highlighted in the recent letter. For example, the UN Children's Fund revealed Tuesday that in Burkina Faso, more than 535,000 children under the age of five are contending with acute malnutrition.

Ahead of that revelation, Lazare said Saturday, "I'm really worried about the overlap between countries the U.N. says will be first hit by coronavirus era famines and countries that are already being hit hit hardest by climate crisis."

"The way the U.S. is responding to these impending famines—utter callousness, making things worse, hyper-nationalism—is an indicator," Lazare added, "of how the U.S. will respond to the far greater climate crisis to come, unless things change dramatically."

In April, Beasley argued, "It is critical we come together as one united global community to defeat this disease, and protect the most vulnerable nations and communities from its potentially devastating effects."

He echoed that sentiment in September, saying, "We must act together, or fall together."