Unions must root out the racism within their ranks, then leverage relationships members have in their own communities and focus on transforming the lives of workers, both inside and outside the workplace. 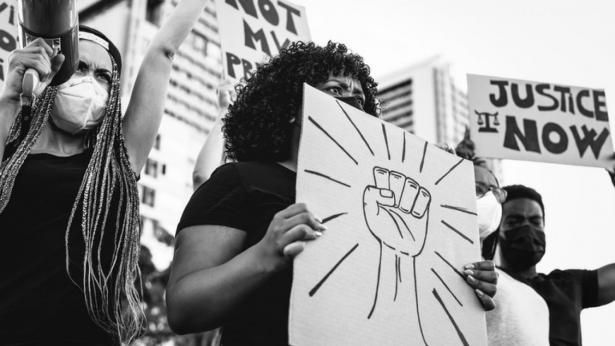 The evils of racism and economic inequality are deeply intertwined in the system of racial capitalism — a fact that has become all the more apparent this spring and summer, with a deadly pandemic, economic catastrophe, and both police and extralegal violence hitting Black communities the hardest. It’s clear that to attack white supremacy, we must also transform the political economy and develop new institutions rooted in core values of anti-racism, economic and gender equity, community, and solidarity.

A militant, bold, and broad-based worker movement can play a key role in ushering in these transformations. Workplaces tend to be more diverse than most social settings in the United States; hence, battles to transform the workplace provide an excellent opportunity for new anti-racist connections and forms of solidarity to be forged. If we can build strong, high-participation organizations in the workplace, we would have a real shot at dismantling racial capitalism.

But the potential power of the labor movement has never been fully realized. And while there are many external factors to blame for the relative weakness of the labor movement, we must also change our own practices if we want to play a transformative role in American political and social life.

Transforming the Labor Movement from Within

Internally, the labor movement must build high-participation organizations capable of carrying out massive actions so that the power of workers lies in the active engagement of the majority instead of the power of public relations campaigns or the personal relationships between union leaders and employers or government ofcials.

As a critical part of this effort, unions must engage in aggressive campaigns to root out racism within their own ranks. We must go beyond symbolic resolutions decrying racism and actually reallocate resources into programs that invest in the leadership of people of color. Unions should focus on bringing members of color into leadership by establishing recruitment and mentorship programs to help would-be leaders thrive. Doing so would send a strong signal to members and communities that the union sees people of color and is invested in their future.

But unions must do more than simply invest in our own members. For the movement to grow and thrive, we need to leverage the relationships members have in their own communities and focus on transforming the lives of workers, both inside and outside the workplace. The traditional union approach of building labor-community alliances with friendly faith leaders or non-prot organizations too often results in shallow transactional relationships where solidarity is eeting. Instead of shallow partnerships, we should focus our campaigns on the communities where union members and their families live — and organize to ght the range of attacks on those communities.

Building effective community/labor campaigns requires an investment of time and resources as well as a range of grassroots tactics, including base building and political education within the membership and the community. Effective community organizing should take place long before any specic employer is targeted, meaning that unions might need to invest in four or ve year campaigns. But the benets of taking risks and investing in developing local talent far outweigh the costs.

The Community Organizing for Real Economics (CORE) initiative of the International Union of Painters and Allied Trades (IUPAT) highlights what is possible when we invest in communities. CORE’s mission to end income inequality, ght environmental degradation and discrimination, advocate for affordable housing, and beat back the underground construction economy demonstrates the possibility of growing the union, building local political power, and improving the communities in which members live.

We live in a pivotal time. The economic and political order of the past few decades has shifted ever greater amounts of wealth into the pockets of the economic elite, exacerbating existing racial and gender differences, suspicions, and hatreds. At this juncture, a section of this elite is building a road to right-wing authoritarianism based on white nationalism. Another section is trying to maintain its power through some allegiance to democratic norms and a partial acceptance of the demographically diverse population of the United States.

We need a third path. It doesn’t matter whether we call it a Third Reconstruction or a New, New Deal, or whether we name our beliefs socialism or abolition. What is important is the content of this transformation: the eradication of racial capitalism and the establishment of a new order based on a erce commitment to anti-racism and economic justice. The labor movement can be an important part of this transformative process — if we commit to change at a fundamental level.

Tanya Wallace-Gobern is the Executive Director of the National Black Worker Center. Prior to assuming this position in 2016 Tanya spent over 20 years in various positions in the labor movement.

Steven Pitts is a co-founder and Board Chair of the National Black Worker Center. Steven recently retired from the UC Berkeley Labor Center where for 19 years he worked on a variety of projects centered on Black worker organizing.