labor U.S. Unions Warn Trump: Don’t Even Think About It

The AFL-CIO “categorically rejects all threats to the peaceful transition of power” said Richard Trumka, “The labor movement,” he said, “simply will not allow any breach of the U.S. Constitution or other effort to deny the will of the people." 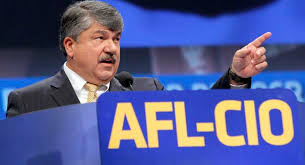 A few days ago, the president of the AFL-CIO (the US’s national trade union centre) issued a powerful statement.

The federation “categorically rejects all threats to the peaceful transition of power” said Richard Trumka, a former leader of the mine workers union. “The labor movement,” he said, “simply will not allow any breach of the U.S. Constitution or other effort to deny the will of the people.”

Trumka’s comments came in response to increasingly threatening noises being made by Donald Trump in which he threatened that regardless of the results of the election on 3 November, he would not be ceding power to his opponent Joe Biden, ever.

Like most observers, Trumka is convinced the Biden is likely to win the election, and concluded with these extraordinary words:
“America’s workers will continue to be steadfast in defense of our democracy in the face of President Trump’s antics, and we stand ready to do our part to ensure his defeat in this election is followed by his removal from office.”

What he meant by union members doing their part to ensure his “removal from office” was not made clear.

There has never been an American election in which a defeated candidate – an incumbent, no less – refused to accept the results. This is truly uncharted territory – and unions are having say things and do things that they’ve never had to do before.

Trumka’s remarks came as unions have increased their commitment to a Democratic victory, both in the presidential race and in the races for seats in Congress.

According to a report earlier this month in The Hill, unions believe that they are “backing a better candidate in a better climate against a better target” than was the case in 2016, when most of them supported Hillary Clinton.

Union leaders are counting on Biden winning more support from their members than Clinton did. In 2016, Clinton beat Trump in union households by just 51% to 42%. She did far worse than Obama did among union members – and in Ohio, she didn’t even win a majority of union votes. Trump’s support among union members was unusually high.

This time around, union leaders believe that Trump’s appeal to working class voters in general, and to union members in particular, has gone down, due to both the economic crisis and the pandemic.

Some union leaders are convinced that Biden will do better than Clinton among their members because, as The Hill put it, he “is seen as more of a working class kind of guy.” Biden is also helped by the fact that a majority of union members in the U.S. are women or people of colour, two groups that are expected to vote overwhelmingly against Trump.

Biden’s campaign to win union support is not, however, helped by his long-standing support (shared with Hillary Clinton) for trade deals such as NAFTA that were seen as detrimental to workers.

For the moment, Trump’s support in the labor movement seems limited to unions of law enforcement officials – police and border patrol, with the occasional local union endorsement.

Union support for minor party candidates, and in particular the Green Party, is non-existent. The website for Green candidate Howie Hawkins, who is a lifelong trade unionist and socialist, shows just seven endorsements – including the “Legal Marijuana Now Party of Minnesota” – but none from a union.

Trump’s threats to remain in power regardless of the election result have served to sharpen the focus for American trade unionists. Their goals, as stated by Richard Trumka, could not be clearer: first defeat Trump – and then ensure that he actually leaves office.

This article appears in the current issue of Solidarity.