The Fate of Our Rights Won’t Be Determined By Amy Coney Barrett, But By Popular Struggle

Reject the lie...that judges are impartial and the courts are apolitical. Shaping the law of the land is within the grasp of ordinary people, and it’s time for us to close that hand into a fist. 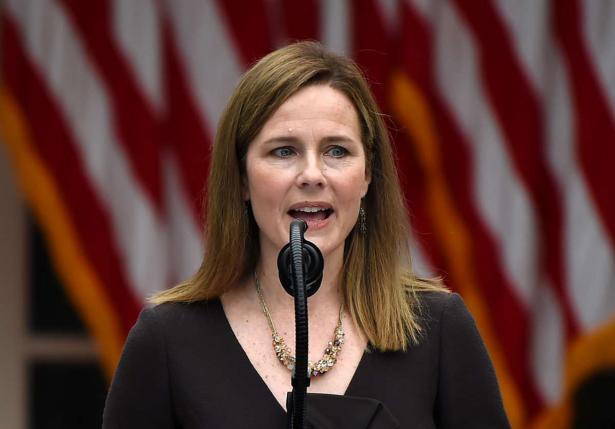 Judge Amy Coney Barrett speaks after being nominated to the Supreme Court by President Donald Trump in the Rose Garden of the White House in Washington, D.C. on September 26, 2020. , OLIVIER DOULIERY/AFP via Getty Images

After Mohsin Yafai became a naturalized U.S. citizen in 2001, his wife, Zahoor Ahmed, a Yemeni citizen, applied for visas for herself and their children. A consular officer at the Department of Homeland Security denied her visa application, claiming that they tried to “smuggle two children” into the U.S. Ahmed and Yafai provided documentation explaining that the names belonged to two of their children, who had tragically passed while waiting for their visas. However, the government denied the visas again by simply citing the same statute, and Ahmed and Yafai filed a lawsuit. The Seventh Circuit Court of Appeals dismissed their challenge last year in Yafai v. Pompeo. The judge who wrote the decision had been appointed by President Donald Trump in 2017 — Amy Coney Barrett.

Barrett, who is now Trump’s nominee to replace the late Ruth Bader Ginsburg, is a darling of the religious right. She joined other right-wing and religious academics to criticize the Obama administration’s contraception mandate under the Affordable Care Act as an “assault on religious liberty.” She is a member of the conservative Federalist Society, and speaks regularly for them and other organizations like the Alliance Defending Freedom (which opposes the freedom of transgender kids to use the bathroom corresponding to their gender identity). In addition to Yafai, Barrett’s three years as a judge included dissenting in favor of upholding the Trump administration’s expanded “public-charge” immigration restriction, dismissing a lawsuit for violation of debt collection laws and denying an appeal of an asylum denial. In the coming weeks, she will use her skills as an academic and lawyer to dodge and give non-answers to questions from the Senate about her beliefs, using remarks such as these, which she delivered after Trump’s announcement on Saturday: “A judge must apply the law as written. Judges are not policymakers, and they must be resolute in setting aside any policy views they might hold.”

Barrett will use this idea of “judicial impartiality” as a shield from scrutiny. Rather than speculating about her religious ties, asking about an article she wrote as a law student, or making weird accusations that “the dogma lives loudly” in her, we should focus on breaking that shield. It won’t be easy — but for the same reason, it’s necessary, as it could convince ordinary people that the courts are immune to political pressure and protest. This idea is not just used by scores of right-wing judges — including Barrett’s “mentor,” Antonin Scalia — to fend off criticism. It has persuasive strength because it is upheld by both Democrats and Republicans, the legal bar, and of course, all members of the Supreme Court.

Barrett will defend Yafai along these same lines. Her opinion said the court would not even ask the government for more details on its boilerplate visa denial, under a doctrine called “consular nonreviewability.” The Supreme Court created this doctrine when it upheld the Chinese Exclusion Act and clarified it for the modern era when it upheld the Nixon administration’s denial of a visa to Ernest Mandel, a famous Belgian Marxist, who was invited to speak at various conferences in the U.S. The Court refused to review whether this denial violated the First Amendment because the administration gave the “facially legitimate and bona fide reason” that, on a previous visa, Mandel had appeared at events not approved by the government. The Seventh Circuit refused to review Ahmed’s visa denial, even though she provided evidence to refute the smuggling accusation, because Barrett and a fellow judge found that the repeated citation to the statute was “facially legitimate and bona fide.” Ahmed had no legal recourse even though the government apparently refused to consider her documentation of her own children.

Was Barrett simply following her previous refrain that she would apply Supreme Court precedent as a circuit judge? Not according to the dissent, which said Mandel was not blanket approval for immigration officials to “mak[e] visa decisions in a purely arbitrary way that affects the basic rights of American citizens.” Moreover, Barrett openly went outside precedent to justify her decision. In both of her opinions in the case (the second denying Ahmed’s petition for a rehearing), Barrett cites a concurring, nonbinding opinion by Justice Anthony Kennedy to argue that “statutory citation alone suffices.” That’s endorsement of an argument, not acceptance of precedent.

Take another example — Barrett’s dissent in Cook County v. Wolf, where the Seventh Circuit upheld a preliminary injunction against Trump’s expanded “public-charge” immigration restriction. The restriction would have denied admission or a green card to many immigrants who the government believed would receive public benefits. The majority said the restriction violated federal laws, such as those protecting disabled people. Barrett disagreed, arguing that while “critics of the ‘public charge’ definition characterize it as too harsh … the same can be said” of the underlying immigration and welfare statutes which supposedly justified it. She concludes: “At bottom, the plaintiffs’ objections reflect disagreement with this policy choice and even the statutory exclusion itself. Litigation is not the vehicle for resolving policy disputes.”

Sound familiar? At first blush, it sounds reasonable — do we really want unelected judges, instead of our elected representatives, deciding national policy? The problem is that those representatives are hardly “ours” or even fairly “elected.” Wealthy people like Barrett may feel well-represented in the halls of Congress, but most people do not. An “impartial” judge who fails to see that distinction will deny judicial remedies for disenfranchised and oppressed people, putting them in a double bind. That’s why this idea, this shield that Barrett will try to use, must be broken.

Whether as a lie (when used cynically) or fanaticism (when truly believed), the idea of judicial impartiality persists despite centuries of the courts, stacked with rich, white men, upholding slavery, Jim Crow, mass incarceration and police violence, the execution of kids, internment of Japanese-American citizens, treatment of women as property, sterilization of intellectually disabled people, and every other atrocity imaginable. It’s why organizations like the ACLU will likely not take a formal position on Barrett’s nomination and why liberal advocates regularly bite their tongues at oral arguments and call Brett Kavanaugh “Justice.” Beyond misguided decorum, the real danger of the lie of judicial impartiality is that many people may simply watch the Barrett confirmation hearings and hope that Democrats or “moderate” Republicans will do something meaningful for once, and that if Barrett is confirmed, they may then resign themselves to the rightward drift of the Supreme Court.

History shows that mass resignation is not inevitable. Roe v. Wade is the law of the land because of the women’s liberation movement, which was racking up victories in states across the country throughout the 60’s and 70’s. The movement’s influence was so great that of the four justices appointed by Nixon to the Supreme Court, one of them wrote Roe itself, and two of them joined the majority!

That’s not to say we should expect the same of Barrett and her ilk. Our situation may end up being closer to a different historical episode, when the Supreme Court, facing the greatest strike wave in U.S. history and an unprecedented threat to “pack the court” from the most popular president in U.S. history, threw out decades of judicial doctrine and upheld federal labor rights legislation during the Great Depression.

People will have to figure out the tactics and strategies that fit the unique dynamics today. But to begin that process, we first have to reject the lie — not just from Barrett, but across the legal establishment — that judges are impartial and the courts are apolitical. Shaping the law of the land is within the grasp of ordinary people, and it’s time for us to close that hand into a fist.

Mukund Rathi is a radical lawyer and technologist. You can reach him on Twitter @heylockthatdoor.