Covid-19 "has demonstrated that not only is the U.S. violating workers' rights, but those violations are resulting in people dying." 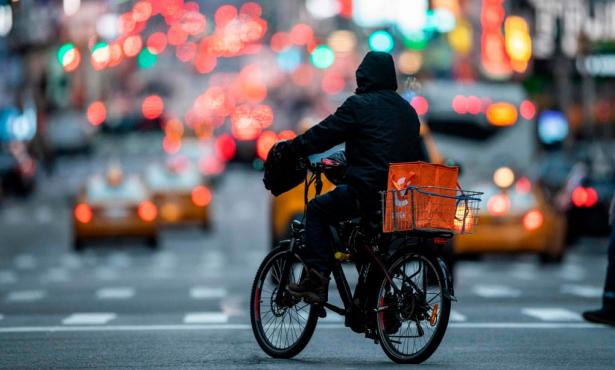 Food delivery workers became essential in New York after the city closed restaurants and bars to the public in March. , Photograph: Johannes Eisele/AFP via Getty Images

United States labor leaders representing workers in several trade unions on Wednesday filed a complaint with the United Nations' labor agency, making the case that under the Trump administration, the U.S. has violated numerous international labor laws during the coronavirus pandemic.

The AFL-CIO and the Service Employees International Union (SEIU) filed the complaint in Geneva, home of the International Labor Organization (ILO), a U.N. institution dedicated to protecting workers' rights related to workplace safeguards and collective bargaining.

The complaint, which documents how the White House has undermined the quality and enforcement of labor laws and occupational health and safety measures, provides yet more evidence of the multiple ways that President Donald Trump has failed workers and puts the U.S. "in the realm of potential wrongdoing typically occupied by less-developed and less-democratic countries," according to Washington Post economics reporter Eli Rosenberg.

Rosenberg explained that the union complaint accused the U.S. of "violating workers' rights in terms not typically associated with well-off countries, at one point saying the bind many essential workers have been placed in during the pandemic—forced to risk infection or lose their jobs and potentially unemployment benefits—amounts to a system of forced labor."

"Covid has laid bare what we already knew," Richard Trumka, the president of the AFL-CIO told the Post. "It has demonstrated that not only is the U.S. violating workers' rights, but those violations are resulting in people dying. It became so outrageous that we wanted to file a complaint."

According to Rosenberg, the complaint attributed the failure of U.S. labor law and policy to protect workers to two main causes. First, by excluding farmers, contractors, gig workers, and other types of more precarious employees, the 1935 National Labor Relations Act, commonly referred to as the Wagner Act, has left workers in these categories unprotected. And second, the Trump administration's yearslong assault on occupational health and safety, which has continued during the pandemic, has magnified the hazards that workers face on the job.

The Post explained that under Trump, the Occupational Safety and Health Administration (OSHA) "failed to issue a safety standard businesses would be required to adhere to for coronavirus safety."

Earlier on Wednesday, journalist David Sirota—drawing from a new study on OSHA complaints and Covid-19 deaths—described in the Daily Poster "the tragic story of workers crying out to OSHA for help, then being ignored, then dying."

Some of the most egregious violations of workers' rights during the pandemic have occurred at meatpacking plants, which Trump in April declared essential, requiring them to remain open despite the growing threat of coronavirus outbreaks.

The Post reported that the complaint—signed by Henry and Trumka—characterized Trump's executive action as giving "a green light for employers to force workers to report for work and risk their lives or lose their jobs," which "is tantamount to forced labor."

According to Rosenberg, the labor leaders also argued that "the executive order was inherently discriminatory because the vast majority of meatpacking workers who contracted the coronavirus were Black or Hispanic."

The complaint highlighted additional ways that Trump's Labor Department has hurt workers, such as when the National Labor Relations Board (NLRB) in March suspended union elections and notified employers that they "could avoid bargaining about proposed layoffs because of the pandemic," Rosenberg explained.

Moreover, Rosenberg wrote, "in two cases in August, the NLRB said companies were in the clear for dismissing workers who expressed concern about safety issues during the pandemic," even though the Wagner Act is supposed to prevent employers from firing workers for raising workplace safety concerns.

The complaint argued that these NLRB decisions "have a cascading effect that will undermine workers' rights in weeks and months ahead as the pandemic continues to ravage American workplaces."

According to Joseph McCartin, a labor historian at Georgetown University, "the complaint that unions have placed before the ILO is damning in its detailed litany of failures and abuses."

McCartin told the Post that this "type of complaint was not very typical of prosperous, democratic countries."

Countries that were investigated by the ILO in 2019 include Burundi, China, France, Myanmar, and Pakistan. While the U.N.'s labor agency lacks enforcement power, McCartin told the Post that "a finding against the U.S. after an investigation could have serious ramifications for the country's reputation."

"It would strengthen politically the argument that our laws are inadequate," McCartin said. "It could help to bring some political pressure to bear on those agencies if in the eyes of the world... the U.S. is found to be failing to ensure basic human rights."

Paul Prescod, a high school social studies teacher and labor organizer, wrote in Jacobin earlier this year that "the political will for occupational safety and health needs to become a priority again today for unions and progressive forces."

"And the pandemic provides no better impetus for this to happen," he added.