Totally Under Control takes viewers back to a time when the pandemic could still have been contained. 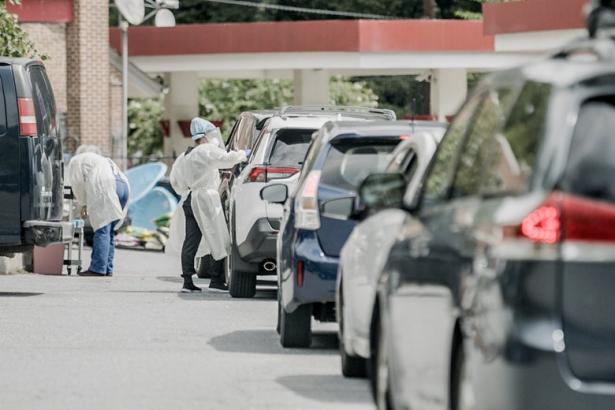 A scene from Totally Under Control, which is available on demand on Oct. 13 and on Hulu Oct. 20. , Courtesy Neon

Releasing a documentary about the COVID-19 pandemic in October of 2020 feels a little bit like putting out one of those “Hey! Remember the ’90s?” shows in 1995. The first two—Ai Weiwei’s Coronation, which was released by Alamo Drafthouse in late August, and 76 Days, which debuted at the Toronto International Film Festival in September—had the benefit, at least for American viewers, of focusing on an environment we’d only seen in passing on the news: the city of Wuhan. But Totally Under Control, which devotes the bulk of its two-hour running time to the first two months of the pandemic in the U.S., risks a worst-case scenario for an investigative documentary, revisiting history that’s too recent to be forgotten without the insight that comes from the passage of time.

What Totally Under Control ends up doing, though, is allowing us passage to a foreign country—not China, but the U.S. before the storm, or at least when it was only raining and not pouring. The movie, which was directed by Alex Gibney, Suzanne Hillinger, and Ophelia Harutyunyan, begins just after the new year, when word of an aggressive, fast-moving virus first began to reach U.S. health officials. The director of the Centers for Disease Control and Prevention, Robert Redfield, spoke with his Chinese counterpart on Jan. 3, and for a while, things seem to have progressed as they should. The right alarms were sounded, the right wheels began to turn. We know what happened after that—what is still happening, to the extent that the movie ends with a caption informing us that it was completed the day before Donald Trump announced that he had tested positive for COVID. But after seven months adjusting to the idea that the disease is now part of our everyday lives, it’s instructive to return to a time when it didn’t have to be that way. This isn’t the story of an inevitable tragedy. It’s the story of a disaster that everyone saw coming and let happen anyway.

Interviewing scientists, journalists, and whistleblowers—no current members of the Trump administration, the CDC, or the Food and Drug Administration agreed or were allowed to speak—the movie assembles a meticulous, inch-by-inch timeline of the first two months of the U.S. response, or lack of response. Rick Bright, the former head of the branch of the Department of Health and Human Services specifically tasked with handling pandemics, sent an email in mid-January stressing the need to urgently formulate a plan, and he was told in response that it didn’t seem like “a time sensitive urgency.” Alex Greninger, a clinical virologist at the University of Washington, marvels at how quickly the CDC was able to start manufacturing testing kits, just 10 days after Chinese scientists posted the virus’s genetic code online. The playbook for dealing with a potential pandemic, Alex Azar explained in January, “is relatively simple and multitiered,” and up until the first week in February, journalist Caroline Chen says, “according to the playbook, everything was going perfect.”

No one in Totally Under Control can explain why the CDC’s test kits included a component that tested for the presence of any coronavirus, and not specifically COVID-19, but the result was an immediate standstill, followed by an excruciating weekslong standstill that the New York Times described as “the lost month.” Without insights from inside the administration, the movie is helpless to explain why a White House that has taken pride in running roughshod over government regulation let bureaucratic bottlenecks slow testing to a trickle: fewer than 100 on an average day, while smaller countries were testing 100 times that or more. “The mystery,” Gibney says in voice-over, “is why those in charge of the bureaucracy didn’t press for a solution.” And the movie essentially leaves it at that, gesturing toward a black box that no one else has been able to open either.

Both Coronation and 76 Days took their cameras into the field and made use of crowdsourced footage on top of that, so to an extent they abandon perspective in favor of immediacy. (Ai at least shifts locations enough to give you a broader sense of how the Chinese government’s lockdown protocols can be both a public health measure and an instrument of authoritarian repression.) But Totally Under Control stays inside its COVID-safe box. The movie opens by giving us a glimpse of its pandemic shooting protocols, which largely involved dropping off cameras that the subjects could use themselves while taking questions from their remote directors. (If you notice an upgrade in aesthetics for South Korean subjects, it’s because the country has controlled the outbreak to the extent that the production could employ a 10-person crew.) The moments of greatest emotion in Totally Under Control are when lifelong institutionalists like Bright confront the failure of the systems they’ve invested so much faith in; he comes near tears recalling how he ended his political career by blowing the whistle on the fast-tracked approval of hydroxychloroquine. It’s frustrating to feel as if you’re stuck in that box with them, but that’s something Americans have had to learn to live with, having our human interactions parceled out in rectangular doses with unvarying views. Even our documentaries feel like they’re still in lockdown.