For three decades the Nigerian government has repeatedly vowed to reform a police force mired in corruption and brutality, only for the problems to persist. Now, even with a global spotlight on the country, many are doubtful real change will come. 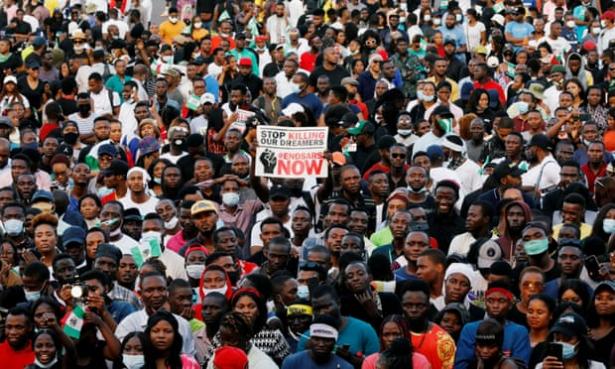 Protesters, mostly young, demand an end to extrajudicial killings, torture, and extortion in Nigeria. According to Amnesty International, at least 56 people have been killed and hundreds injured since the protests began, Oct. 8th., Temilade Adelaja/Reuters

Earlier this month, in the face of swelling protests in Lagos and worldwide, the Nigerian police announced the dissolution of the police unit known as SARS, which has been linked to torture, unlawful imprisonment, extortion and murder. Protests have dwindled in Lagos after the army allegedly shot dead at least a dozen peaceful protesters on Oct. 20, but have continued worldwide.

In a press conference, Nigerian president Muhammadu Buhari pledged that the end of SARS was only the beginning: “The disbandment of SARS is only the first step in our commitment to extensive police reform,” he said.

Many protesters have heard similar promises before and remain skeptical. Over the past three decades, the Nigerian government has repeatedly vowed to reform the habits of a police force that observers say is mired in corruption and brutality, only for the problems to persist or exacerbate. Now, even with a global spotlight on the country, many are still doubtful that real change will be brought about. Here’s a brief timeline of the history of SARS and the many times it was supposed to improve—and what experts think will happen now.

By 1992, when SARS was founded, the precedent of controlling Nigerian people through excessive force had long been the norm: British colonizers had arrived in the 19th century and treated the land and its people as resources to be controlled and plundered. Their colonial enterprise had left behind a culture of violence and corruption so that even after Nigeria won independence in 1960, military coups became the norm. The army held power in Nigeria for much of three decades until 1999, including when SARS, the Special Anti-Robbery Squad, was created.

At the time, armed robbery was rampant in cities like Lagos. In 1992, the Superintendent of Police, Simeon Danladi Midenda, was tasked with forming a unit that would operate independently and surreptitiously in order to ambush robbers. (A separate but similar anti-robbery force had been created in 1984.) “The secret behind the successes of the original SARS was its facelessness and its mode of operation,” Midenda told the Vanguard, a Lagos-based newspaper, in 2017. “We operated in plain clothes and used plain vehicles that could not be associated with security or any government agency.”

Midenda says that SARS did have some early successes in capturing armed bandits. But reports of success were soon accompanied by reports of abuse of power. In 1993, Ayotunde Adesola, a graduate in computer science from the University of Lagos, was picked off the street by SARS and accused of being in a local gang. In an attempt to make him confess, officers poured irritant powder on his face while beating him, the Lagos-based Civil Liberties Organization reported. During this era, General Sani Abacha ruled the country with an iron first, crushing protests and opposition activists; he was accused of many violations and abuses by global human rights organizations.

A pattern soon emerged of SARS extorting civilians or detaining and torturing them into giving confessions. In 1995, two university students, Bola Afilaka and Ayodele Adejuyibe, were shot and killed after Afilaka refused to stop his car at a checkpoint. In 1999, a man died in SARS custody after days of interrogation and abuse from officers who accused him of stealing a car, according to the Civil Liberties Organization. Journalists were frequently targeted, with their homes raided and families harassed in the middle of the night.

While Abacha died in 1998, SARS only grew in aggression and power. In the early 2000s, as cybercrime became more common in Nigeria, SARS devoted its energy to finding the perpetrators—but, rather than investigating crimes digitally, SARS officers began profiling people on the street, openly harassing and extorting those they deemed suspicious, says Seun Bakare, program manager at Amnesty International Nigeria.

“There was the belief that everyone who is carrying a laptop may be using it for internet fraud,” Bakare says. Young people—particularly men with nice clothes, watches or dreadlocks—were accused of being “Yahoo boys” (a local term for internet scammers), shaken down, detained and tortured.

These actions caught the attention of concerned parties both inside and outside Nigeria. In 2007, the U.N. Special Rapporteur on torture and other cruel, inhuman and degrading treatment or punishment wrote that “torture is an intrinsic part of how the police operate within the country,” and that a significant portion of the violations were carried out at the SARS detention center in Abuja. The following year, a presidential committee was formed to propose reforms for the Nigeria Police Force, but the proposals were not implemented in any significant way. The year after that, the government formed the National Committee Against Torture, but that organization received no funding or ability to carry out its work. “Maybe people do not even know about its existence,” Amnesty International wrote in 2014.

In 2010—the same year that the Open Society Juice Initiative alleged the Nigerian police operated with “pervasive corruption,” “destruction of evidence” and “routine extortion”—President Goodluck Jonathan pledged his commitment to police reform by earmarking 71 billion naira ($186 million) to the cause.

But little changed, and two years later, the newly appointed Inspector General of Police Mohammed Dikko Abubakar savaged SARS in an interview, describing the operation as “killer teams engaging in deals for land speculators and debt collection.” He promised to “purge the system of corruption, which cripples and frustrates every honest effort at reforming the police.”

Jide Babalola, a journalist who currently works as a legislative aide for the office of the Deputy Senate President, says there’s a reason why every promise of reform has ended in disappointment: officials have lacked the funding and organizational structure to see the changes through, and rampant corruption often leaves local precincts and individual officers severely underfunded and underpaid. “Only a tiny fraction of what is budgeted for the Nigerian police force ever gets to them,” he says. “How are they going to do anything serious?”

Another Attempt to #EndSARS

In 2016, the World Internal Security and Police Index ranked Nigeria’s police as the world’s worst in a global survey of 127 countries, with an overwhelming 81% of respondents saying they had paid a bribe to a cop in the past year. Many of these bribes happened at makeshift roadblocks set up by SARS officers in order to extort drivers and passengers. The same year, Amnesty International found that SARS “perpetrate[s] acts of torture and other cruel, inhuman or degrading treatment or punishment against detainees in their custody on a regular basis.”

As organizations continued to speak out, so did Nigeria’s citizens, who began mobilizing on social media. In 2017, #EndSARS began trending, with hundreds of people sharing stories of abuse, and assault. That December, the inspector general of the Nigeria Police Force bowed to the pressure, announcing plans to reorganize the team, prosecute cases of human rights abuses and spearhead a better training program for recruits.

The same month, President Buhari signed into law the Anti-Torture Act, which criminalized torture. But Bakare, of Amnesty International, says that not a single police officer has been charged under that act. “Absolutely it has not had any impact,” he says.

In 2018, Nigerian vice president Yemi Osinbajo demanded that Inspector General of Police Ibrahim Idris restructure SARS once again, ban stop-and-search raids, and require officers to wear uniforms with full identification. A federal human-rights desk was also created to address violations. Following the announcement, police spokesperson Moshood Jimoh told The Nation that the police had “fully complied with the directives for the overhaul and reformation of SARS.”

But between January 2017 and May 2020, at least 82 cases of torture, ill-treatment and extrajudicial executions by SARS officers have been documented by Amnesty International.

In October, a video that appeared to show an unprovoked killing by a SARS officer went viral, kicking off a new wave of social media protests and live demonstrations. On Oct. 20, soldiers fired on crowds of protesters at the Lekki toll gate in Lagos, killing at least 12 people, according to Amnesty International. The organization says that at least 56 people have died since the protests began, many at the hands of police and other security forces using excessive force. The army has denied responsibility for the Lekki shooting; President Buhari has blamed the violence on “hooliganism.” The physical protests in Lagos have quieted recently as protest leaders have asked people to stay home—but marches have continued in other Nigerian states as well as abroad, including in Helsinki.

Among the protesters’ five core demands is to “increase police salary so that they are adequately compensated for protecting lives and property of citizens. But during this period of economic stagnancy, many Nigerians worry that their government will again be unwilling to actually change the fabric of the police force. “Unfortunately, I do not have hope,” Bakare says. “If past promises to reform yielded nothing, there’s nothing concrete that shows this time around the government will do what it should do.”

Tajudeen Yusuf, a member of Nigeria’s House of Representatives and of the Peoples Democratic Party, fears the looting and vandalism that have grabbed headlines in recent days are threatening the effectiveness of the movement. But despite the many forces working against the protesters, Yusuf says it is vital for activists not to become discouraged. “It takes youth being consistent in their agitation to create norms that make civil rule unique and for a people,” he says. “Struggle is what produces freedom: Nothing comes without a fight.”

Meanwhile, a new police unit, SWAT (Special Weapons and Tactics), has been created. Some Nigerians, including David Aworawo, a history professor at the University of Lagos, are cautiously optimistic about the enterprise: “Given the recent consciousness regarding police brutality, I think it will be difficult for [SWAT] to operate with the viciousness and impunity that characterized the operations of SARS,” he says. “Police brutality will not end with the current efforts, but it will likely reduce drastically.”

But many others think that SWAT is no different from SARS, and just the continuation of a long history of obfuscation and inaction. “It’s nothing more than a change of name and acronym,” Gimba Kakanda, a writer and political analyst, wrote for TIME. “It’s just like an old wine in a new bottle.”

[Andrew Chow, with reporting by Suyin Haynes/London. Andrew R. Chow is a reporter for Time Magazine. He has previously written for the New York Times, Pitchfork and NBC News.]

On October 27, US Representative Alexander Green (D-TX) condemned the killings of unarmed protesters by the Nigerian military in letters to US Secretary of State Mike Pompeo and UN Secretary General Antonio Guterres. As reported by SaharaReporters, Green wrote, “My congressional district includes parts of Houston, Texas, which has the second largest Nigerian population in the United States. This is not just a Nigerian problem. This is a matter of international concern as Black lives matter not only in the United States but also wherever they may be.”