Can Trump Actually Stage a Coup and Stay in Office for a Second Term?

Despite all of Trump’s machinations, it is extremely unlikely he can find a way to stay in power or stage a coup. Here’s an explanation of why. 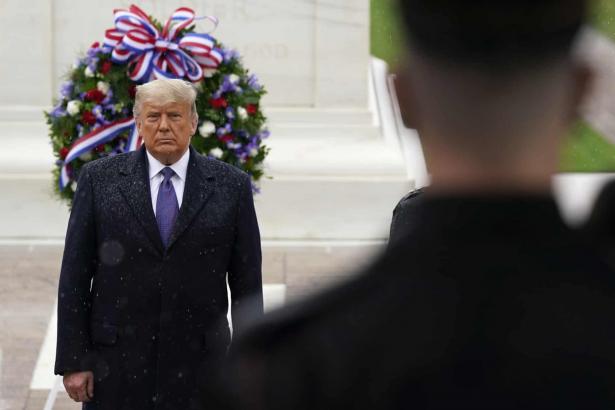 Trump refuses to acknowledge Biden’s win, but experts say there isn’t a constitutional path forward for him to remain president

Joe Biden won the presidential election, a fact that Donald Trump and other Republicans refuse to acknowledge.

There are worries the president and other Republicans will make every effort to stay in power. “There will be a smooth transition to a second Trump administration,” Mike Pompeo, the secretary of state, said on Tuesday. William Barr, the attorney general, has also authorized federal prosecutors to begin to investigate election irregularities, a move that prompted the head of the justice department’s election crimes unit to step down from his position and move to another role.

Despite all of Trump’s machinations, it is extremely unlikely he can find a way to stay in power or stage a coup. Here’s an explanation of why:

Donald Trump refuses to accept that Joe Biden won the presidential election. Is there a constitutional path for him to stage a coup and stay in office for another term?

Not really. The electoral college meets on 14 December to cast its vote for president and nearly every state uses the statewide popular vote to allocate its electors. Biden is projected to win far more than the 270 electoral votes he needs to become president. His victory doesn’t hinge on one state and he has likely insurmountable leads in Michigan, Nevada, Wisconsin, Pennsylvania and Arizona.

There is a long-shot legal theory, floated by Republicans before the election, that Republican-friendly legislatures in places such as Michigan, Wisconsin, and Pennsylvania could ignore the popular vote in their states and appoint their own electors. Federal law allows legislatures to do this if states have “failed to make a choice” by the day the electoral college meets. But there is no evidence of systemic fraud of wrongdoing in any state and Biden’s commanding margins in these places make it clear that the states have in fact made a choice.

“If the country continues to follow the rule of law, I see no plausible constitutional path forward for Trump to remain as president barring new evidence of some massive failure of the election system in multiple states,” Richard Hasen, a law professor at the University of California, Irvine, who specializes in elections, wrote in an email. “It would be a naked, antidemocratic power grab to try to use state legislatures to get around the voters’ choice and I don’t expect it to happen.”

For lawmakers in a single state to choose to override the clear will of its voters this way would be extraordinary and probably cause a huge outcry. For Trump to win the electoral college, several states would have to take this extraordinary step, a move that would cause extreme backlash and a real crisis of democracy throughout the country.

“There’s a strange fascination with various imagined dark scenarios, perhaps involving renegade state legislatures, but this is more dystopian fiction than anything likely to happen,” said Richard Pildes, a law professor at New York University. “The irony, or tragedy, is that we managed to conduct an extremely smooth election, with record turnout, under exceptionally difficult circumstances – and yet, a significant portion of the president’s supporters are now convinced that the process was flawed.” 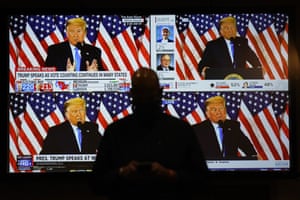 A live broadcast of Donald Trump speaking from the White House is shown on screens at an election night party in Las Vegas on 3 November. Photograph: John Locher/AP

Is there any indication Republicans in these important states are going to go along with this?

Shortly after election day, Jake Corman, the top Republican in the Pennsylvania state senate, indicated his party would “follow the law” in Pennsylvania, which requires awarding electors to the winner of the popular vote. In an October op-ed, Corman said the state legislature “does not have and will not have a hand in choosing the state’s presidential electors or in deciding the outcome of the presidential election”.

But on Tuesday, Republicans in the Pennsylvania legislature said they wanted to investigate allegations of voter fraud. There’s no evidence of widespread malfeasance in the state, but the move is alarming because it could be the beginning of an effort to undermine the popular vote results in the state. The Republican-led legislature in Michigan is also investigating the election, as are Republicans in Wisconsin. There’s no evidence of widespread wrongdoing in either place.

Is this related in any way to the lawsuits Trump is filing?

Trump’s campaign has filed a slew of legally dubious suits since election day. The purpose of these suits appears not to be to actually overturn the election results, but to try and create uncertainty and draw out the counting process.

Each state has its own deadlines for certifying election results that are then used to allocate its electoral college votes. In at least two states, Pennsylvania and Michigan, Trump’s campaign is seeking to block officials from certifying results.

That certification timeline is important because federal law says that as long as election results are finalized by 8 December this year, the result is “conclusive”. That provides a safeguard against Congress, which is responsible for counting the electoral college votes, from second-guessing election results. By dragging out the process, the Trump campaign may be seeking to blow past that deadline and create more wiggle room to second-guess the results.

Even if that is the Trump campaign’s hope, courts are unlikely to step in, Pildes said.

“States are going to start certifying their vote totals beginning in less than 10 days, and there is no basis in the claims made thus far for the courts to stop that process,” he said.

Say the worst-case scenario comes to fruition and Republican-led legislatures override the will of the people in several states. Is there any safeguard to stop Trump?

Yes. Michigan, Wisconsin, Pennsylvania and Nevada all have Democratic governors who would refuse to approve a set of Trump electors with the popular vote clearly showing Biden winning their state. Instead, they would submit the electors Biden is entitled to as the winner of the popular vote.

It would then fall to Congress, which is charged with counting the votes from the electoral college, to decide what to do. The law that outlines the process for how Congress should handle a dispute in electors from a state is extremely confusing, but experts believe the slate backed by a state’s governor is the legally sound one. There is a rival theory that the president of the Senate, Mike Pence, could have control over the process. A dispute over electors between the US House and Senate is a worst-case scenario and the US supreme court would probably be asked to step in.

Regardless of however long a dispute is, the constitution does set one final deadline. Even if counting is ongoing, the president and vice-president’s terms both end at noon on January20. At that point if there isn’t a final result in the race, the speaker of the House – probably Nancy Pelosi – would become the acting president.