"The president seeks an unconstitutional 'restriction on the right to vote'... He is violating his duty to defend the Constitution." 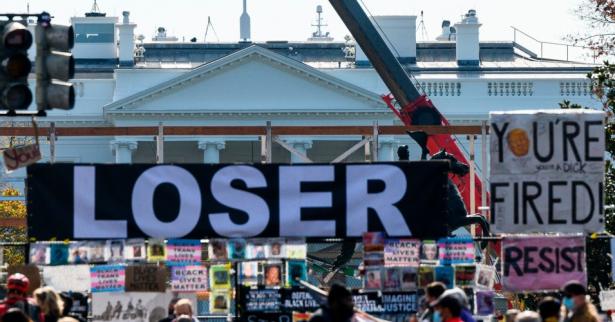 Supporters of U.S. president Donald Trump gather in front of the White House near counter protesters in Washington, D.C. on November 13, 2020, Andrew Caballero-Reynolds/AFP via Getty Images

A coalition of 1,000 legal experts and scholars Friday denounced as unconstitutional President Donald Trump's ongoing refusal to accept the election results and called on his legal team to meet their "ethical obligations" by ending their support for the his false claims and assertions.

An open letter signed by retired federal and state judges, former state attorneys general who served under Republican and Democratic governors, and law professors condemned Trump's claims of fraud as being presented "without evidence and false," singling out Republican officials who have publicly supported the president's efforts to have thousands of ballots thrown out.

"There has never been a more important time for America's lawyers to acknowledge the importance of these solemn commitments, and to demand accountability for those lawyers and federal officials who do not live up to their oaths and ethical obligations."
—1,000 legal experts

"The President of the United States has directed the filing of court cases seeking to stop ballots from being counted on the ground that there has been widespread ballot fraud," the legal experts wrote. "His sons have sharply criticized Republicans who are not backing their father’s claims. Following these comments, Senators Ted Cruz and Lindsey Graham, both attorneys, and House Minority Leader Kevin McCarthy participated in interviews where they echoed the president's allegations of fraud."

By urging the justice system to disqualify ballots cast by eligible voters, the experts wrote, "the president seeks an unconstitutional 'restriction on the right to vote' under Reynolds v. Sims. He is violating his duty to defend the Constitution."

Major news outlets Thursday night projected that Biden officially won Arizona, leading the president by more than 11,000 votes, and announced early Friday afternoon that he was also the winner in Georgia. Biden leads the president by about 14,000 votes in Georgia, where a recount has begun. According to most tallies, Biden now holds 306 electoral votes versus Trump's 232. In the popular vote, more than five million voters supported the Democratic former vice president over Trump.

The president has filed lawsuits in Pennsylvania, Arizona, Michigan, Georgia, and Nevada—despite the fact that he would need to convince courts that tens of thousands of votes in each state were fraudulent.

Earlier this week a lawyer for Trump admitted in a Pennsylvania court that more than 500 votes the Trump campaign deemed questionable were not actually fraudulent. The president's team also drew stunned reactions from political observers on Thursday when it produced 238 pages of poll watchers' affidavits in Michigan, alleging that rude facial expressions from election workers and loud noises in a ballot counting center amounted to election tampering.

"Lawyers who represent the president, or his campaign, in challenges to this election—like all lawyers who appear in court—have an ethical obligation of candor to the court," the legal experts wrote. "There has never been a more important time for America's lawyers to acknowledge the importance of these solemn commitments, and to demand accountability for those lawyers and federal officials who do not live up to their oaths and ethical obligations."

Former Justice Department official Stuart Gerson, who worked under the George H.W. Bush and Bill Clinton administrations, told USA Today that he signed the letter because "it is an abuse of the rule of law to file charges that lack an objective evidentiary basis."

"It is a violation of attorney ethics to represent a party that files such charges purely for political purposes," Gerson added.

The letter also includes a condemnation of Attorney General William Barr, who the experts say added to his own "shameful legacy" when he authorized investigations of election fraud in the days after the election.

"This unprecedented moment transcends partisanship," said the experts. "The country and the world are watching to see how America responds to the president’s shameful attack on the legitimacy of America's voting process."