Democrats Can’t Win Without the Left

For several reasons, the left is an indispensable component of the Democratic coalition. For one thing, contrary to centrists’ claims, progressive policies like free health insurance, green energy, and a $15 minimum wage are broadly popular. 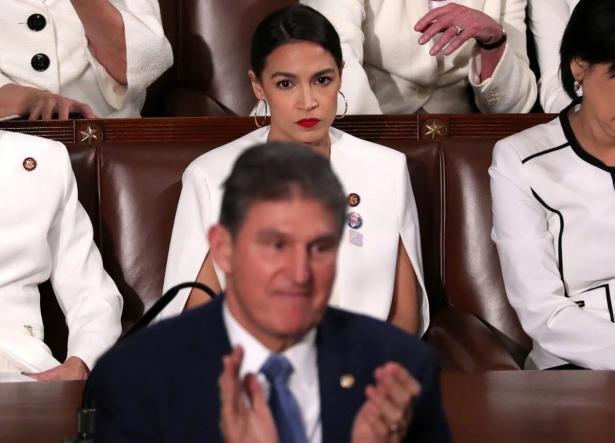 ON NOVEMBER 4TH, Democrats in the US House of Representatives assembled for a conference call after a disappointing Election Day. In the emotional meeting, Rep. Abigail Spanberger, who had just been narrowly re-elected in Virginia’s 7th district, claimed that too much talk of “socialism” and “defunding the police” had nearly lost her the race. To avoid defeat in 2022, she argued, the party must back away from left-wing rhetoric or it would be “torn apart.” House Majority Whip Rep. James Clyburn agreed. If the party is “going to run on Medicare for All, defund the police, socialized medicine,” he said, “we’re not going to win.”

Even as they celebrate Biden’s victory—and try to fight off President Donald Trump’s attempts to discredit the election results—many Democrats are grappling now with how and why their efforts at an electoral sweep fell short. Pre-election polls had primed Democrats to expect a landslide; instead, they managed a tight electoral college win (despite a large lead in the popular vote), a likely failure to capture the Senate (pending two long-shot Georgia runoffs), and the unanticipated loss of a dozen House seats. Centrists in the party have responded to this disappointment by blaming the left for their woes—a time-honored tradition. In 2000, many blamed Ralph Nader’s third-party candidacy, and not the baldly undemocratic ruling by the Supreme Court, for George W. Bush’s defeat of Al Gore. In 2016, likewise, many Democrats complained that left-wing voters had cost Hillary Clinton the election by staying home or voting for the Green Party’s Jill Stein. This year, with record turnout across the country and marginal Green Party support, they have pointed their fingers not at left-wing voters but at left-wing policies and messaging. They do so at their own peril: Without the left’s intellectual energy, organizing strategy, and activist base, the Democratic Party cannot survive.

For several reasons, the left is an indispensable component of the Democratic coalition. For one thing, contrary to centrists’ claims, progressive policies like free health insurance, green energy, and a $15 minimum wage are broadly popular. Fox News’s Election Day polls, for instance, found that a plurality of voters supported a government-run health care plan. An overwhelming majority also supported upholding Roe v. Wade and investing in renewable energy. And support for progressive policies isn’t just evident in polling. In Florida, 61% of voters approved a referendum for a minimum wage of $15 an hour—in a state where Trump beat Biden by more than 3% and incumbent Democrats were tossed from their House seats. According to an analysis by Earther, of the 93 co-sponsors of the Green New Deal up for re-election, all but one won their bids, and four won easily in swing districts. All 112 cosponsors of Medicare for All on the ballot won re-election.

Centrist Democrats have also claimed that this summer’s wave of protests, and their often uncompromising demands for a radically transformed criminal justice system, hurt their party’s chances; they have directed particular ire at activists’ calls to “defund the police.” Yet such claims are similarly unfounded. Polling in June showed that while a majority of Americans still oppose the idea of defunding the police, the prospect is popular among a majority of Black voters and Democrats. (A plurality of all voters were willing to support proposals framed as moving investments in policing to other social services.) In fact, the protests led to a major surge in Democratic voter registration this past June, and brought Democratic voters to the voting booth in November. According to Associated Press exit polling, 53% of the 90% of Americans who cited the Black Lives Matter protests as key in determining their vote chose Biden, while 46% who said the same chose Trump—numbers that suggest the protests animated Democratic turnout more than they stoked a much-feared conservative backlash. Strong turnout among Black voters in Georgia, Michigan, and Pennsylvania was a key factor in Biden’s victory.

Along with a vision for public policy, the Democratic Party’s left flank has the organizing skills that turn out voters. When the Biden campaign decided to eschew in-person campaigning because of Covid-19, it was left-wing organizers who devised and implemented strategies to fill the gap. In Arizona, for example, an aggressive door-knocking campaign by the group Living United for Change helped deliver the state for Biden even as Trump gained support among Latinx voters elsewhere in the country. In Detroit and Minneapolis, respectively, volunteers for Reps. Rashida Tlaib and Ilhan Omar knocked thousands of doors for Biden; in Philadelphia, union organizers did the same. While it’s too soon to know in detail how these efforts impacted the vote, it’s clear that outspoken leftist congresswomen did not depress turnout or hurt Biden’s candidacy—they likely did the opposite, by shoring up support for the president-elect among voters of color in crucial battleground states.

Then, of course, there is the left’s digital savvy—a competency that most mainstream Democrats don’t even come close to matching. In a rebuke to Spanberger and Clyburn, New York Rep. Alexandria Ocasio-Cortez tweeted that Democrats should not pin their losses on leftist messaging and should instead look at their campaign infrastructure. In many of the districts where Democrats lost, she noted, they were not running fully functioning digital campaigns. In a follow-up interview with The New York Times, Ocasio-Cortez said that she had offered her services to various candidates in swing districts—and that all but five declined. (The five campaigns she did assist won, she added.) Beto O’Rourke, a recent candidate for the Democratic presidential nomination, made a similar argument in an email to supporters reflecting on catastrophic Democratic losses in Texas: “We have to be far more effective on digital and social media. The anecdotal takeaway from those I’ve listened to, especially in border communities, is that Trump/GOP had a ferocious game . . . and we had none.”

This strategic weakness is not new. The Democratic Party has long paid only “sporadic and superficial attention to the mechanics of voter engagement and organizational investment,” political scientists Daniel J. Galvin, Daniel Schlozman, and Sam Rosenfeld wrote this week in The Washington Post. “In consequence, the party has become hollow—top-heavy at the national level, weak at the state and local levels, and lacking a rooted tangible presence in the lives of voters and engaged activists alike.” And so, in the absence of effective party apparatuses to sustain momentum and organizing, the task has fallen to the same left-wing activists that many party operatives deride.

Even when Democrats have managed to build grassroots consensus around mainstream liberal priorities, they have not proven up to the task of sustained organizing. After the Obama campaign built the staggeringly successful Organizing for America volunteer network to support the president’s win, the president and his advisors let the campaign infrastructure atrophy and then disbanded it. Its remains were incorporated into the Democratic National Committee—turning off independents who had been part of the network. Abandoning the movement that had brought him into power, Obama embraced the politics of back-door compromise championed by White House Chief of Staff Rahm Emanuel, rather than a strategy of energizing the grassroots base to exert popular pressure on recalcitrant lawmakers.

The ground that the Democratic Party has neglected has proven fertile for left-wing organizing, especially at the state and municipal level. In New York, Democratic Socialists of America (DSA) candidates sent five socialists to the State Assembly this year and, in 2018, left groups helped remove Democratic politicians who caucused with Republicans from the state senate. In Chicago, DSA elected a six-member socialist caucus to the City Council last year. And across the country last week, voters elected 20 candidates and passed eight ballot measures endorsed by DSA’s national chapter. All of the candidates in partisan races ran as Democrats—because most leftists invested in electoral politics recognize that, in the absence of viable electoral avenues outside the two-party system, they will need to work with liberals and centrists to achieve their goals. This is why, as dissatisfying as those on the left found Joe Biden, many worked to get him elected: registering voters, knocking on doors, and phone-banking. But for too long, centrist Democrats have resisted a reciprocal recognition and taken the left’s support for granted. That needs to change if the Democrats want to have any hope of avoiding future electoral college close calls and down-ballot disappointments.

As the Democrats struggle to chart a new path forward, Republicans, too, are debating the party’s post-2020 agenda. As Nicholas Lemann wrote early this month in The New Yorker, the Trump years marked a break with what had long been the Republicans’ “fusionist” paradigm, its unwieldy coalition of Christian evangelicals, hardline nativists, and wealthy free-market fundamentalists. Though Trump largely let conventional corporate Republican administrators shape his administration’s policies, his populist, anti-globalization messaging has, for some, pointed the way toward a new direction for the party. Fox News host Tucker Carlson, who regularly decries the excesses of capitalism, is considered a formidable potential successor to Trump. Even Senator Marco Rubio, once a Tea Party favorite, is now talking about how markets have failed to serve people equitably. This should be a warning to the Democrats: If they retreat to bloodless, centrist messaging and allow Republicans to take up the mantle of economic fairness, they could suffer even further losses among working-class and middle-class voters across racial demographics.

In campaigning, Republicans have proved adept at catering to their base. As repugnant as many Republican lawmakers found Trump, when they realized their constituents were behind him, they followed. That has proven disastrous for the country, and it is why many Republicans continue to humor the Trump administration’s attempts to stymie the transition of power. But it is also politically pragmatic: Republicans recognize that they can’t win the Senate runoffs in Georgia if they alienate their Trump-supporting base. While Republicans’ anti-democratic spectacle is nothing to emulate, Democrats might benefit from paying similar attention to what their most reliable voters actually think.

As much as the party might dismiss them, most left-wing voters are unlikely to abandon the Democrats entirely at this juncture. The real threats of Trumpism mobilized left-wing organizers to campaign for Biden this year despite his continuous attacks on the left, and this is likely to be the case in future elections as long as Republicans remain the obviously “greater evil.” But elections are won at the margins; small differences in enthusiasm, turnout, and organizing make a big difference. The fact that increased numbers of Black and Latino men appear to have turned to Trump this year underlines the risks of taking any voters for granted.

This year, thanks in part to local and national organizers, youth turnout was the highest it has been in more than 100 years. Young Black and Latinx voters backed Biden by overwhelming margins in swing states like Pennsylvania, Michigan, Georgia, and Arizona. Across the country, Biden won young voters by a margin five points greater than Clinton did in 2016, according to CNN exit polling. If these newly energized voters—the same young people that take to the streets to call for defunding the police—feel the party doesn’t represent their interests, not all of them will stick around. And if union organizers and progressive activists feel that knocking doors for national elections yields little gain compared to their other valuable work, they will stop doing it.

Whether they like or not, Democrats need the left to win. To keep the left, they need to start earning its support.

Mari Cohen is an assistant editor at Jewish Currents.

Responsa is an editorial column written by members of the Jewish Currents staff and reflects a collective discussion.