Say No to Austerity for Workers: McConnell and the GOP Are About to Pull the “We Have No Money” Scam

Austerity in response to these circumstances can only make conditions worse. Cuts in government spending at the same time as unemployment and threats of eviction hang over many heads is a recipe for deep recession. 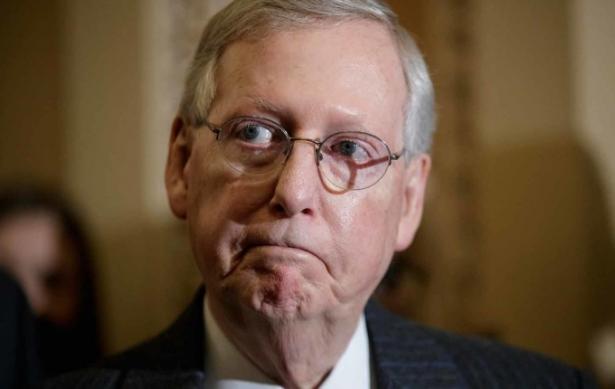 Southwest Harbor, Maine (Special to Informed Comment) – Not surprisingly the national debt is a subject of concern. Liberal and Left economists, most of whom supported the CARES relief package, knew and predicted that once the Trump tax reduction for the rich had become law—despite the massive increases in government debt it entailed– debt would be used as an excuse to trim future expenditures for public goods and more generally to attack the welfare state.

As is the case with most issues today, the early terms of the debate are set by Mitch McConnell. He declares willingness to provide a relief package to state and local government but insists it must be limited. There isn’t much money left in the piggy bank. And he does not wish to encourage the profligacy of local governments, whose generous funding of its workers is blamed for fiscal crises at all levels.

A closer look at those generous pensions suggests something other than profligate spending. Pensions were generous, but often only in compensation for salaries and benefits that trailed most private sector salaries and benefits. More serious was exploding health care costs brought on by the world’s most inefficient health insurance system. Add to that persistent underfunding of pensions justified by utterly unrealistic assumptions about the continuing productivity of the modern market economy.

Pension obligations have been victims of the volatility of the deregulated financial markets, not the cause. The Covid recessions, like the global financial crisis and the Eurozone’s even deeper recession, has caused substantial decreases in government revenues and increase in expenditures on safety net obligations. The result is deficit spending and growth in the debt to GNP ratio. With unemployment growing and households needing to tighten their own belts debt becomes a likely target.

Austerity in response to these circumstances can only make conditions worse. Cuts in government spending at the same time as unemployment and threats of eviction hang over many heads is a recipe for deep recession. Demand must come from somewhere for a modern market economy to work.

Unfortunately austerity has working for it narratives and metaphors deeply etched in western liberal culture. John Maynard Keynes nicely captured this dimension. “The completeness of the [the notion that government can do nothing] is something of a curiosity and a mystery. It must have been due to a complex of suitabilities in the doctrine to the environment into which it was projected. That it reached conclusions quite different from what the ordinary uninstructed person would expect, added, I suppose, to its intellectual prestige. That its teaching, translated into practice, was austere and often unpalatable, lent it virtue. That it was adapted to carry a vast and consistent logical superstructure, gave it beauty.

That it could explain much social injustice and apparent cruelty as an inevitable incident in the scheme of progress, and the attempt to change such things as likely on the whole to do more harm than good, commended it to authority. That it afforded a measure of justification to the free activities of the individual capitalist, attracted to it the support of the dominant social force behind authority.”

As for the empty piggy bank, progressives should emphasize how well the piggy bank has accommodated trillions in tax cuts without even the slightest sign of panic in capital markets. Beyond making this defensive point progressives need narratives and pictures of the great capital projects, financed by deficit spending, that transformed this nation.

Unfortunately, rather than take historically low interest rates as an invitation to spend big on green, some neoliberal economists and political leaders hope to use deficit worries, recessions and public sector and public-sector worker aversions both to privatize Social Security and take away the few generous (defined benefit) pensions still enjoyed by some public sector workers. Such an agenda not only further squeezes the working class it also implants one further element of instability into an already fragile political economy.

“Far from just supporting retirees, defined-benefit pensions contribute to economic recovery by providing a long-term, stable source of counter-cyclical spending—spending that continues even during economic downturns. To the extent that pension funds use dividend income from investments to pay benefits, they also redistribute income that would normally go to high-income investors, making income more equal across the economy. .. Finally, .., defined-benefit funds have a responsibility to actively invest their capital in order to produce long-term returns… As a result, they are a critical source of the long-term, patient investment and venture capital needed for sustainable growth and job creation”,

Sciacchitano is a former labor lawyer and organizer and a professor at the National Labor College and a freelance labor educator.

Far better not only to resist austerity now but also to extend to all workers benefits that were once widely enjoyed by private as well as public sector workers. Rejecting deficit mania and promoting constructive alternatives can build alliances and enhance social justice.

John Buell has a PhD in political science, taught for 10 years at College of the Atlantic, and was an Associate Editor of The Progressive for ten years. He lives in Southwest Harbor, Maine and writes on labor and environmental issues. His most recent book, published by Palgrave in August 2011, is "Politics, Religion, and Culture in an Anxious Age." He may be reached at jbuell@acadia.net