Health care workers of color are twice as likely as their white co-workers to catch COVID-19. Unions could be the answer to addressing these disparities. 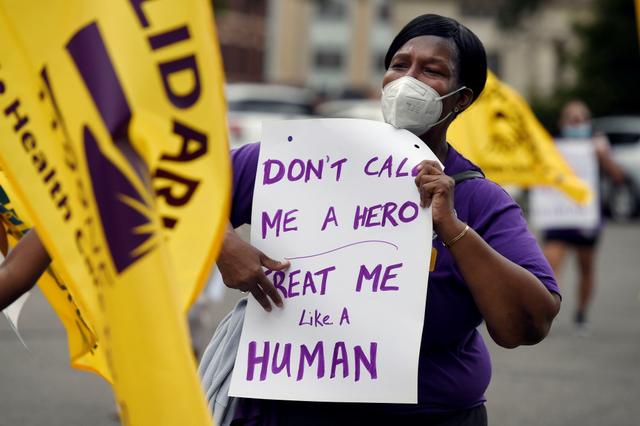 Like many nursing homes across the country, the Genesis HealthCare center in Greenville, Rhode Island, primarily houses white residents and employs people of color. Adelina Ramos, who’s Cape Verdean, works at the center as a certified nursing assistant and faces a number of challenges common to the caregiving profession. Each day, she cares for 11 dementia patients on her own, with that number sometimes rising to 18 if a co-worker can’t come in. The job comes with long hours on her feet and the occasional risk of physical harm when dealing with aggressive patients. Ramos knows and accepts these risks, as she finds purpose in her work—but these challenges have grown far worse since the onset of COVID-19.

Not only have the residents become fearful, as they’re no longer able to recognize their caregivers’ masked faces. Ramos also says she went a week without receiving new personal protective equipment (PPE), though boxes of equipment were stored in the administrator’s office. It wasn’t long into the pandemic before her co-workers started showing symptoms of COVID-19 and began testing positive. Soon, the National Guard stepped in to provide more testing. Though asymptomatic, Ramos tested positive. She likely would have never known her status had it not been for the help of her union.

The Service Employees International Union 1199 New England district had demanded that Genesis provide testing to its employees, which is what led to the National Guard’s intervention. 1199NE also secured additional PPE and won a more extensive sick leave policy in its contracts.

Systemic racism plagues many parts of the health care industry, and the lack of commitment from supervisors to ensuring the safety of employees represents one crucial piece of this complex issue. Both directly and indirectly, this is a problem that unions can help address.

According to a study published in the American Journal of Political Science, white workers who belong to unions harbor less racial resentment than workers who aren’t union members. Unions, the study found, promote greater collaboration and understanding between workers of differing races. Indeed, the variable of union membership plays as significant a role in racial resentment as such factors as education levels or gender, and a larger role than the factor of age.

“Right now, it’s really hard to organize workers to be able to bargain with management to get things like PPE,” the study’s co-author, Jacob Grumbach, a political science professor at the University of Washington, told the Prospect. “But unions empower workers who could be exploited based on some dimension of identity.” Grumbach and co-author Paul Frymer, who teaches political science at Princeton, say unions play a critical role in uniting workers across different backgrounds and can help redefine the image of the working class beyond one of whiteness. They pointed to union-led efforts, such as the 1968 minimum-wage increase, as examples of how the collective-bargaining force of workers can combat the racial wealth gap.

More immediately, union bargaining power has enabled members to secure more safety equipment than their non-union counterparts. “This moment is really showing us what the labor movement can and is doing to protect people at work,” Frymer said.

Adanjesus Marin, lead organizer for SEIU 1199NE, understands just how important unions are in securing these safety measures. Marin oversaw a strike at the Bannister Center for Rehabilitation and Nursing in Providence, Rhode Island. Unlike the Genesis center, Bannister primarily houses residents of color. Its workforce earns some of the lowest wages in Rhode Island, just 50 cents above minimum wage. It also has one of the lowest staffing averages in the state, with 12 being on the low end of the number of residents one staff member may care for. Because of the low wages and short-staffing, many Bannister employees also work at other nursing facilities. The back-and-forth travel, combined with a lack of PPE, led dozens of employees to contract COVID-19. One worker died. With that, the Bannister workers decided to strike.

For three days, with near-unanimous participation, Bannister workers picketed outside the center, waving yellow flags reading, “1199NE Solidarity.” Though Bannister management had told Marin they would “never agree” to staffing language in the new contract, after three days, the Bannister caregivers won wage increases and elevated staffing levels. Marin calls this a victory for the residents as much as it was for the workers. “When nursing home residents contract COVID, instead of having them hospitalized, they’re basically left in the nursing home to survive or die,” he said. The staffing increase allows workers to carry out their caregiving responsibilities while paying the utmost attention to coronavirus prevention strategies.

Fully 93 percent of health care support providers do not have a union to back them up.

Marc Bayard, director of the Institute for Policy Studies’ Black Worker Initiative, notes that health care unions have played a critical role not just in protecting frontline workers, but also in coronavirus education and record-keeping. Groups like the SEIU and National Nurses United were some of the first agencies to issue best practices for coronavirus safety. These groups also record national trends and data and issue reports, such as the report by Nurses United detailing how the government’s failure to track COVID-19 data led to the deaths of over 1,700 health care professionals. Bayard adds that unions also afford frontline workers, many of them Black and brown, the freedom to speak about workplace conditions without fear of losing their jobs. At a time when workers of color are at the center of the nation’s grappling with racism and unsafe working conditions, Bayard says the protection and empowerment that unions afford workers of color is essential.

“All of these events have created the need for conversations about how racial and economic justice work hand in hand,” Bayard said. “However, one simply just has to go back in history to realize that’s always been the case.” Bayard says economic and racial justice have always been interconnected issues within the African American community, which is why he believes Black workers have historically gravitated toward unions. Martin Luther King’s 1963 march in Washington, D.C., he adds, was officially—and unofficially—the “March on Washington for Jobs and Freedom.”

After taking time off following her positive test for COVID, Adelina Ramos returned to work and became involved in ongoing organizing efforts to improve conditions at the Greenville facility. In July, the workers held an informal picket that secured them raises, new contractual provisions about staffing, and affordable health care. The Greenville workers had been trying to secure these improvements for the past five years. Had their requests been heard more promptly, Ramos and her peers might have never contracted COVID-19. “These companies know a majority of their staff are women and people of color living in poverty, so they don’t really care what happens to us,” Ramos said. “But I’ve worked at a facility without a union before, and there’s a huge difference between the facilities that have a union and the facilities that don’t.”