Avatar made no secret of its political edge, but the distribution of wealth may be the franchise's most consistent target of criticism. 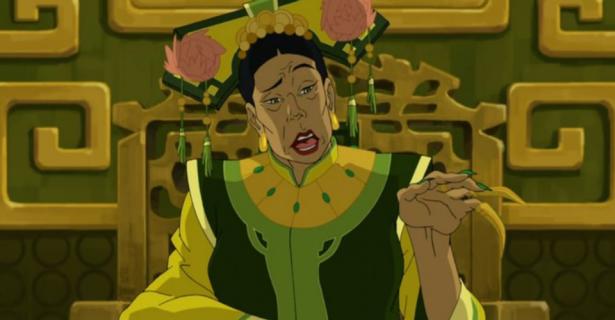 The villains of Avatar change with every series, as every story since Avatar: The Last Airbender through to the latest novel, The Shadow of Kyoshi, pits its heroes up against new villains and new threats. For as much as the faces and the powers may change some facets remain constant. The political nature of the series was always present, and paying attention to its throughline in every installment of the franchise makes it clear: the real villain is wealth inequality.

Go through the entire chronology of the franchise and the exorbitantly wealthy hold culpability for most of the series' problems -- with dogged attention dedicated toward exploring why that is and how that works in various stories. Winding back the clock as far as the series goes, to the days of the first Avatar depicted in The Legend of Korra's "Beginnings" two-parter, the inciting incident of the plot comes from the Chou family hoarding food and supplies to keep the surrounding citizenry impoverished. They use their expensive weapons to maintain inequality until Wan uses firebending to lead an uprising against them.

While the world state changed massively over that time, the economics really didn't. By the Era of Kyoshi, the wealth inequality in the world calcified into a problem too great for even the Avatar to stamp out. The Rise of Kyoshi features bandit hordes plaguing helpless countrysides already taxed heavily by corrupt governors, while The Shadow of Kyoshi shows how petty rivalries between the noble houses of the Fire Nation create devastating problems for the country as a whole. Entire wars brew and famines worsen simply because such noble families play an elaborate game against each other the poor are unaware of.

The Kyoshi novels also set up the corruption of Ba Sing Se that proves to be one of the most critical thematic throughlines in the world of Avatar. The original series first introduced the corruption of the world's largest city and the way the rich could easily navigate it, with Toph's wealthy Beifong name earning the Gaang open passage amidst refugees barred from the city. Said corruption was not only structural in its political systems but physically structural -- the city itself is organized into tiers from the outer ring to the inner according to economic status. The living conditions starkly reflect its inhabitants' positions.

The Legend of Korra only underlined Ba Sing Se's problems, with Book Three exploring the rotting fruit stands and ghettos of its outer ring actively repugnant to the main characters. When the Red Lotus start bringing down the walls to spark a revolution, the city riots, and you almost can't blame them given the conditions they were forced to live under. The fallout of the riots and the assassination of the Earth Queen ends up being a resurgence of bandits throughout the Earth Kingdom, and it is only through promising protection from them, and the bounty of her shared and redistributed resources, that Kuvira rises to power as a dictator thereafter.

Korra was perhaps the most prepared to put a point on its criticisms of capitalism, industrialization and the economic inequality that results from it. While both were later humanized, Hiroshi Sato and Iknik Blackstone Varrick are introduced as extravagant and unabashed capitalist businessmen whose wealth enables them to personally empower revolutions that threaten the stability of the government. Between the two of them, the Red Lotus and Kuvira, every single season of Korra was marked by significant attention given to problems inherent in the wealth distribution of its world.

Every installment in the Avatar franchise has remarkable nuance when it comes to navigating political and philosophical matters, and this seems to be a subject that receives particularly keen focus. Over a decade and a half of storytelling that uses its imaginative fantasy setting to explore the issue opens its fanbase up to a way to engage with ideas of tantamount importance in the real world. The subject of economic inequality proves to be an increasingly relevant topic in public discourse, but Avatar is probably the only one to explore it so thoroughly through the world of elemental martial arts.