As a result of Congressional inaction, in the last weeks of 2020 and with the pandemic raging worse than ever, millions of Americans are staring into an economic abyss. 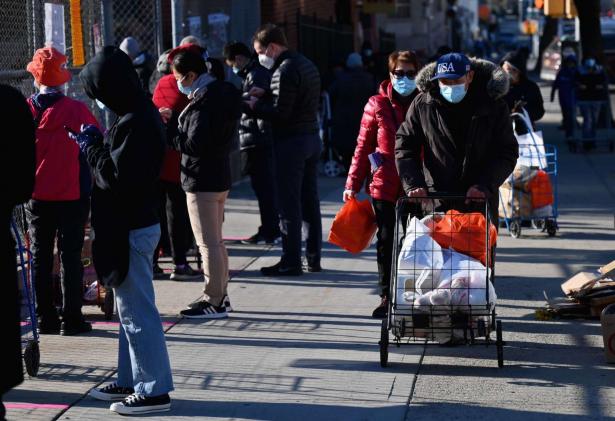 People stand in line at a food distribution event ahead of the Thanksgiving holiday on November 20, 2020, in the Brooklyn borough of New York City., ANGELA WEISS / AFP via Getty Images

Back in May, the Democratic-controlled House of Representatives passed the HEROES Act. It was aimed at delivering trillions of dollars of additional federal funds to support health care systems, unemployment benefits, housing assistance, nutritional programs, as well as money to keep cities and states, public transit systems, schools, and other vital infrastructure functioning. Since then, the House has passed several updated versions of the Act.

And yet, with Trump and the Senate GOP hostile to federal programs that they misleadingly claim will benefit only “blue states and cities,” the HEROES Act has languished. Through the late spring and summer, the GOP apparently hoped the pandemic would simply vanish, and the tens of millions of unemployed people would all be able to return to work. Opposing expanded unemployment systems, senators such as Lindsey Graham argued that support-oriented measures would sabotage the labor market by providing people with disincentives to re-enter the workforce. Once it became clear that the pandemic wouldn’t simply vanish of its own accord, the GOP pivoted, and, embracing much smaller financial stimulus packages, reframed its opposition to the HEROES Act as fiscal responsibility in the face of a Democratic legislative effort to use the pandemic as an excuse to fund all of the party’s favorite programs. Thus, legislative stalemate.

As a result, in the last weeks of 2020, absent quick congressional action and with the pandemic raging worse than ever, millions of Americans are staring into an economic abyss. Somewhere in the region of 12 million people — millions of them gig workers who don’t qualify, in normal times, for unemployment; and millions more who are now considered to be long-term unemployed and who, again, in normal times would have maxed out their unemployment benefits — will lose their financial lifelines next month.

Unpack the economic morass, however, and the predicament of low-income Americans is far worse than just a congressional inability to extend COVID-era unemployment benefits. The last nine months have peeled back the veneer on a society so vastly unequal — both as compared to earlier moments in U.S. history and as compared to every other advanced industrial democracy on Earth today — that it no longer has either the ability or the will to do right by those at the bottom of the economic pyramid.

Three billionaires now possess the same amount of wealth as the bottom half of the U.S. population. Meanwhile, somewhere in the region of 13 million households that rent their homes are at risk of eviction once eviction moratoriums end over the coming months. If this tsunami of evictions does occur, it will be on an even larger scale than the housing displacement that followed the 2008 financial collapse, and will add to a homelessness crisis in America of a magnitude no other developed country comes close to experiencing.

Of course, it’s not only on the housing front that low-income Americans are at risk.

Over the past four years, despite low unemployment numbers prior to the pandemic, many of the health insurance coverage advances that occurred after the passage of the Affordable Care Act in 2010 were rolled back by a relentless Trump administration campaign to sabotage the ACA. In 2016, according to Kaiser Family Foundation estimates, 26.7 million Americans were uninsured. By the end of 2019, that number had grown to 29.2 million. This was still far lower than the 46.8 million uninsured at the time of the ACA’s passage, but the warning signs are clearly there: There has been a recent acceleration in the number of uninsured. In fact, several think tanks and health care advocacy groups have estimated that the longer the pandemic lasts, the more American families will lose their health insurance. The estimates range from a low of nearly three million workers losing insurance as they lose their jobs to a high of 8.5 million people ending up uninsured.

Making this health situation even more precarious, groups monitoring hunger and food insecurity in the U.S. have reported extreme spikes in the numbers of Americans who struggle to put enough food on the table. Earlier this year, that number was thought to be about 37 million. Today, it is 54 million, or one in six Americans. Seventeen million of these are children. Food banks around the country are reporting unprecedented demand.

But the crisis goes far beyond these statistics. Precarious access to housing, medical care and food is magnified by structural crises in the environments that poor Americans live in.

From one city to the next, absent a congressionally funded rescue package, public transit systems — which are disproportionately relied on by poor people and people of color — are collapsing in on themselves. In New York City, the MTA is proposing unprecedented cuts, which will likely lead to nearly 10,000 fewer transit employees and a 40 percent reduction in services. In San Francisco, many bus routes have been permanently canceled. In Los Angeles, which invested billions of dollars in a new subway system over the last decade, train and bus routes are being slashed around the city.

And from one state to the next, because of the lack of new dollars flowing in from Congress, legislators are pushing stark cut-to-the-bone budgets for K-12 schools and for public higher education institutions. After-school programs and special education programs are being stripped down to bare essentials. Again, disproportionately, these impact lower-income residents who are most reliant on state services, and least able to seek out alternatives once those services start to fail. Educational inequality has been worsened by the fact that insufficient support has been provided for lower-income students to engage in remote learning; low-income children have the least access to computers, to internet access, and to space in which to study remotely.

These crises ought not to be viewed separately from each other. They are overlapping disasters, made far worse by congressional dysfunction, with consequences that, cumulatively, will prove devastating to many tens of millions of Americans over the coming years.