'The People Are Not Afraid Any More': Young Peruvians Rise Up to Demand Change

After a tumultuous week, Peru’s burgeoning grassroots movement says it will not accept a return to business as usual 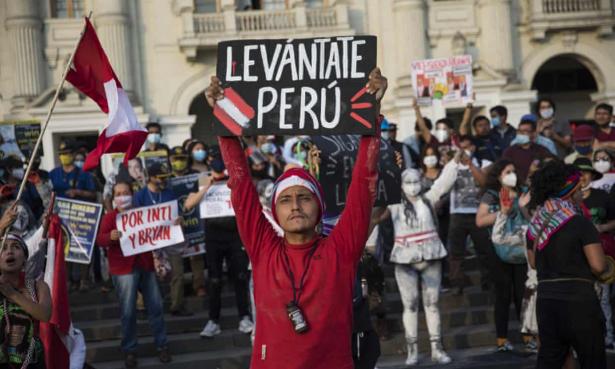 A performer holds a sign that reads in Spanish ‘Wake up Peru’ during a protest in Lima on Saturday. Nine out of 10 Peruvians opposed the ousting of Vizcarra, a recent poll found., Photograph: Rodrigo Abd/AP

After a tumultuous week in which Peru saw three presidents – and a brutal police backlash against massive pro-democracy protests – a nascent youth movement has emerged with a clear message to the country’s politicians.

Under the rallying cry “They messed with the wrong generation”, the non-partisan group is warning Peru’s elected representatives that they will not tolerate a return to the business-as-usual world of dirty tricks and backroom deals.

The grassroots movement claimed another victory on Tuesday, when the caretaker president, Francisco Sagasti, announced an overhaul of the police force, appointing a new police chief and sacking more than a dozen top brass officers.

In a televised address to the nation, Sagasti also expressed his “deep regret” for the heavy-handed police repression in which two young people died and others were gravely injured. He also apologized for incidents in which police humiliated young women, allegedly forcing them to strip naked.

But the 76-year-old engineer and his caretaker government must tread a fine line between maintaining legitimacy with a newly awakened, social media-driven, political movement, and an opposition-dominated congress, which could use impeachment powers to remove him, as it did with former president Martín Vizcarra.

Diego Cruz, a 33-year-old publicist, was one of tens of thousands of Peruvians who marched against the “coup-mongers” who voted by 105-19 to remove Vizcarra amid unproven bribery allegations.

“It’s not just one generation marching here, it’s everyone, because we feel outraged that [congress] is carving up the country,” he said.

“The people are not afraid any more,” said Erika Ríos, a 47-year-old lawyer who wore the red and white colours of the Peruvian flag. “This congress doesn’t represent us.”

“It also sends a powerful warning sign against the abuse of congressional impeachment powers, which lies at the heart of the current crisis,” he said. “Like legislatures in Brazil and Paraguay, Peru’s congress ‘weaponized’ the impeachment tool for transparently self-interested political goals – and Peruvian society has risen up to hold the ringleaders accountable.”

Nine out of 10 Peruvians opposed the ousting of Vizcarra, and 83% believe the decision to do so was motivated by the lawmakers’ political and personal interests, according to a recent poll by the Institute of Peruvian Studies.

With more than half the 130-member chamber enjoying parliamentary immunity from criminal investigations – ranging from murder to money-laundering – Peru’s citizens have long regarded their elected representatives with a mixture of fear and loathing. 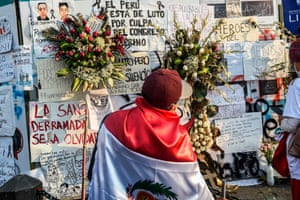 A man wearing a Peruvian flag stands in front of a mural in honour of Inti Sotelo and Bryan Pintado, two victims killed in recent protests. Photograph: Ernesto Benavides/AFP/Getty Images

“More than [political] parties they seem like cartels,” said Iván Lanegra, secretary-general of the Peruvian NGO Transparencia. “What you have is a collection of parties all vying for control of state resources and public works while promoting their own vested interests.”

The chamber include figures such as Posemoscrowte Chagua – who took part in a deadly 2005 insurrection in which six police officers were killed – and Fernando Meléndez, a former regional governor who faces more than 80 criminal investigations including embezzlement, money laundering and labour exploitation.

Chagua’s party, the extremist Union for Peru (UPP), led the call for Vizcarra’s removal. Founded by Antauro Humala, the jailed leader of the failed 2005 military uprising and the younger brother of the former president Ollanta Humala (2011-16), the party is inspired by their father Isaac Humala’s radical “ethnocacerism” creed, which preaches the superiority of “copper-skinned’” Andeans and a xenophobic hatred of Peru’s southern neighbour Chile.

Before he was forced from office, Vizcarra’s government was undertaking a quality-control overhaul of the private education – a reform which directly impacted the business interests of José Luna, the founder of Podemos (We Can), and former presidential candidate César Acuña of the Alliance for Progress (APP). Their parties both voted to remove Vizcarra.

University reform was an important factor driving young people to march against Vizcarra’s departure, said Ricardo Cuenca, who was sworn in as the interim education minister last week.

“Up until a short time ago, we thought that the young were totally disconnected from politics,” said Cuenca, the former director of the Institute of Peruvian Studies.

“I think they are showing us, rather like what happened in Chile, that they are disconnected from an old way of doing politics.”

Dan Collyns is a British multimedia journalist based in Peru.