Social Security Administration Is Preparing to Bar 500,000 Americans from Getting Benefits

The agency will suggest that the “modern” economy provides many jobs that even a displaced and disabled older worker can do. 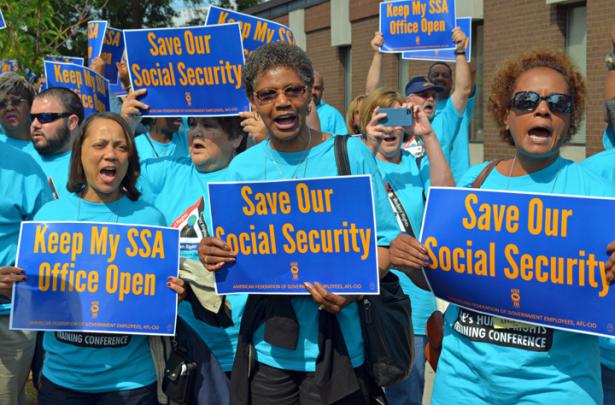 Over the weekend, the Social Security Administration (SSA) sent the Trump administration’s Office of Management and Budget (OMB) a proposal that — if similar to a version leaked earlier this year — will bar Social Security benefits from hundreds of thousands of Americans. The document that leaked suggests the proposal could ultimately prevent as many as 500,000 Americans from receiving benefits. Whether SSA can slip this through the regulatory process before President-elect Joe Biden’s inauguration may depend on whether SSA and OMB respect the formal regulatory process.

If implemented, the regulation should be undone by the Biden administration or overruled by Congress.

SSA’s proposal, as described in press reports, would make it harder for older workers to receive Social Security Disability Insurance (SSDI) benefits. By law (not regulation), SSA is required to consider age, education and work experience when determining whether a person meets the statutory definition of disability.

That is, reflecting congressional intent, the current rules acknowledge that older workers (for example, workers in their 50s) will have more difficulty in adjusting to occupational requirements in the national economy following the onset of a serious disability. SSA’s proposed new regulation would likely undo these rules to a large extent, making it harder for older workers to qualify.

I expect the SSA to use a lot of misdirection and fiction to sell this proposal. The effort will likely center on the buzzword “modernization.” The agency will suggest that the “modern” economy provides many jobs that even a displaced and disabled older worker can do.

But the issue is really not complicated. In a study published in the Journal of Disability Policy Studies this year, I conclusively show severe health problems are widespread among not only SSDI recipients but also among applicants denied SSDI.

The widespread health problems among SSDI applicants lead to very limited participation in the modern economy. About 73 percent of denied applicants have little to no earnings (less than $100 a month). Labor market success is even less common among those who are awarded SSDI. Further, labor market success, while still uncommon, is more likely among younger SSDI applicants and beneficiaries. Hence the need to take account of older age as reflected in the law and current SSDI rules.

In short, SSA’s proposal to tighten SSDI benefits fails to even advance past a very basic question about the suggested policy: What is the point? Looking at recent or modern data, the current system routinely denies benefits to older individuals with serious health problems and diminished prospects in the modern economy. Amplifying these outcomes by trying to get even more denials is not a rational policy approach.

The proposal would also exacerbate inequality in the United States along the lines of race and income. More than 25 percent of denied Social Security disability applicants are Black, a percentage that far exceeds the percentage of African Americans in the overall working age population. Additionally, nearly 40 percent of denied applicants live in poverty. SSA’s proposal to get more denials seems out of touch with regard to many of the serious problems facing the country.

Trying to push through policy changes before a new administration takes power is a common, if cynical, approach in government. These efforts, even if undone by Congress or a new administration, carry a cost because they divert attention from real-world issues. An important example will illustrate.

SSA is required to provide basic due process to all SSDI applicants. If SSA denies a claim, the agency must cite occupations the applicant could perform in the national economy. Where does SSA get these occupations? From a book with data tables largely produced in the 1970s.

SSA’s assertions using the DOT, such as the claim that there are 200,000 people employed full-time in the U.S. addressing envelopes by hand, has been met with skepticism by federal courts. The courts will eventually strike down SSA’s use of the DOT, which will imperil the agency’s ability to even process disability applications.

The legal risk associated with the DOT motivated SSA to ask the Bureau of Labor Statistics (BLS) to collect recent data on modern occupations. That effort was a success, with BLS collecting the first new data on occupational requirements in more than 40 years.

But implementing the data from that crucial project stalled in 2018 when SSA told its inspector general that it would first “modernize” its disability policy before using modern data. A fair reading of this is that an effort to improve the disability program through better data was hijacked by the agency for the purpose of getting more denials in the system. When the Government Accountability Office checked in with SSA during 2019, it naturally asked what SSA meant by “modernizing” its policy. SSA could not produce a plan or even documentation.

It turns out, SSA’s plan consisted of various ideas that were pitched to OMB during 2019-2020 and now form the basis for the regulatory proposal that was sent to OMB over the weekend.

The incoming Biden administration will need to review “last minute” regulations developed at SSA. More generally, it will need to help SSA do a better job managing its programs. The agency needs to get back to solving real-world problems, such as replacing the defunct data in the DOT, rather than inventing issues to justify harsh policy changes.

David A. Weaver, Ph.D., is an economist and retired federal employee who has authored a number of studies on the Social Security program.